St Kilda would no doubt love to be able to secure GWS star Tim Taranto, but the likelihood of them being able to trade in the contracted 22-year-old seems highly unlikely.

Essendon great Matthew Lloyd said on Footy Classified on Wednesday night that Taranto was the ideal player for the Saints and he would be their prime target in this trade period.

List consultant Graeme Allen also worked at the Giants previously – albeit not when Taranto was recruited – and is now a consultant to St Kilda so there was also a connection between the clubs, who traded successfully when former Giant Jack Steele moved to the Saints. 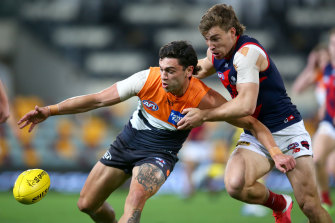 Tim Taranto is contracted at GWS until 2022 and his manager says he is staying. Credit:Getty Images

Unfortunately, those pieces might not combine to get a deal done as the Giants and the player's manager insist Taranto is going nowhere.

Matt Bain, Taranto's manager, laughed off the suggestion that the former number two pick, who was the Giants' best and fairest winner last year, could be moving.

"There's zero truth in it. It will not be happening. He signed last year until the end of 2022 and he loves the club, he loves it up there. Tim Taranto is not leaving," said Bain.

Lloyd was not wrong in saying Taranto would be the ideal player for St Kilda and the player whose name they would logically put up as their number one target, but from the words of Bain and the Giants it seems doubtful that will happen this off-season.

The Giants have already lost Zac Williams and Aiden Corr as free agents this year, which has slightly eased pressure on what was known to be a stressed salary cap.

The Giants are still waiting to hear from Jeremy Cameron on whether he will accept a new long-term, contract or seek to exercise his free agency rights and move clubs.

Most in the industry now expect Cameron to remain at the Giants but until he announces his decision and, like Joe Daniher, the longer it takes to make it public, the greater the doubt becomes that he will stay.

NRL fan’s giant Broncos spoon troll
Roosters lose SBW for finals showdown with minor premiers Penrith
Best News
Recent Posts
This website uses cookies to improve your user experience and to provide you with advertisements that are relevant to your interests. By continuing to browse the site you are agreeing to our use of cookies.Ok