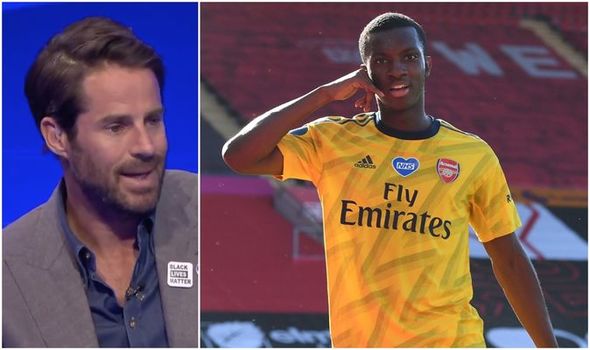 Arsenal striker Eddie Nketiah has been tipped to make it at “the top level” if he can continue his hard-working performances after being hailed for his efforts in the Gunners’ win over Southampton.

The 21-year-old scored his second Premier League goal of the season and his fourth in 10 games across all competitions this term as he chased down Southampton goalkeeper Alex McCarthy and forced the shot-stopper into an error with his high pressing.

McCarthy misplaced a pass straight into Nketiah’s path and the rebound allowed the striker to tap into an empty net to put the visitors ahead in the first half.

Despite the searing heat at St Mary’s, Arsenal academy graduate Nketiah produced an energetic display on the south coast as Mikel Arteta’s men picked up a win to move into the top half of the table and six points off fifth-placed Manchester United.

And Sky Sports pundit Jamie Redknapp was full of praise for the Lewisham-born frontman’s display up top, hailing him as the “shining light” of the north London outfit’s evening in Hampshire. 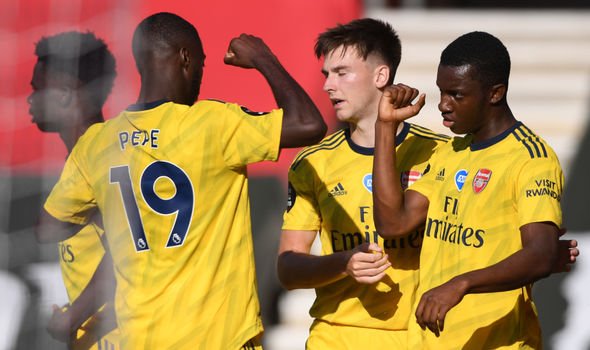 Former Liverpool and Tottenham midfielder Redknapp, who spent a season at Southampton, said: “Incredible. It really is. It makes you wonder why it didn’t work out for him [on loan] at Leeds.

“What I liked most about that interview was him saying he likes to be a nuisance. There’s a lot of players who tend to want to be silky, want to show their class, show their elegance.

“He knows that if he does that, he can make it at the top level. He starts the press like he said, he’s the first to go and close the centre-backs.

“If you’ve got a striker who doesn’t put you under pressure that’s the dream, when you’ve got someone like that breathing down your neck… It becomes a different proposition when someone’s chasing you down and making it hard for you.

Redknapp went on to add: “It was hot today. That’s why I was so impressed with Eddie Nketiah, he didn’t stop. The weather didn’t affect him, his work-rate.

“Holding got man of the match from Alan Smith and I thought he did ever so well but for me, Eddie Nketiah was the shining light in that team.”

Sol Campbell said of Nketiah: “He loves to be a nuisance, he loves to chase things down, it’s a natural thing for him so as a manager you’re saying to yourself, well sometimes you’ve got to say to a player, ‘Can you move forward? Can you shut down?’

“If it’s naturally coming out of him, it’s one less thing to think about.

“He’s got his just rewards and a little bit of uncertainty by the keeper and he’s got his goal. Picked his pocket and it’s fantastic.”

Speaking post-match, Nketiah told Sky Sports: “It was a very important three points. We have been unfortunate in the last two games, the results didn’t go our way.

“We knew we had to roll our sleeves up and fight for the three points. Hopefully we can build on this and keep pushing forward. 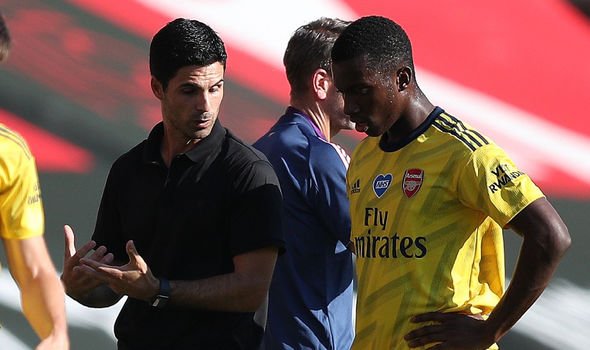 “It was difficult. Southampton came out really strong in the second half and all the boys worked hard in the heat to keep going.

“Luckily at the end we were able to wrap it up with a second goal and add a bit of gloss to the scoreline.

“We work a lot on our high press and I think we did it really well today. For me personally, I always try to give my all for the team and I could smell a bit of uncertainty from the goalkeeper.

“I just kept following in. I have done it hundreds of times so it’s nice one of them has led to a goal.”

Chelsea manager Frank Lampard gives interesting Liverpool verdict on Premier League season
Chelsea fan sings 'Roman Abramovich, we won't take a knee' in anti-BLM protest
Best News
Recent Posts
This website uses cookies to improve your user experience and to provide you with advertisements that are relevant to your interests. By continuing to browse the site you are agreeing to our use of cookies.Ok