Arsenal boss Mikel Arteta has handed an olive branch to Matteo Guendouzi after the fiery midfielder was left out of the squad which beat Southampton.

Guendouzi was fortunate to avoid missing the match through suspension after the Football Association opted not to take action on him after he appeared to grab the throat of Brighton’s Neal Maupay.

Reports later emerged of Guendouzi verbally abusing the Brighton players on the pitch.

And the 21-year-old was not included by Arteta with academy starlet Matt Smith given his place.

Without Guendouzi, Arsenal showed their battling qualities as they overcame Southampton to record just their third away win of the season. 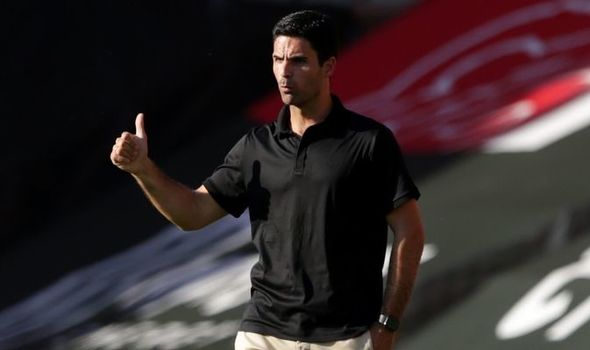 Speaking after the match, Arteta refused to reveal his reasons for leaving out Guendouzi but stressed the midfielder can still get back into his plans.

“It was squad management,” he told Sky Sports.

“I will deal with these issues internally and privately.

“The door is always open. So everybody is welcome to jump on the boat.”

Meanwhile, on Sky Sports, pundit Jamie Redknapp was scathing in his assessment of Guendouzi.

He said: “He can definitely play, make no mistake about it. He’s got talent.

“Yeah possibly [the question is around his temperament]. He acts like he’s a big player and he’s not yet.

“You’ve got to earn the right to be a big player.

“I remember the game last year at Southampton and Tony Adams was on and we did some analysis about him as a midfield player, not tracking runners, not working hard enough.

“I don’t like the messages that I hear about him, there’s been a couple of times Mikel Arteta has had to leave him out of the squad – at 21 years of age because you’re not doing things correctly, that shouldn’t be happening.

“That suggests there is something wrong at the club when that keeps happening.

“Imagine a young man behaving like that with the likes of Tony and Thierry Henry – it wouldn’t have happened.”

Man Utd fans react to Juan Mata’s two-word nickname for Anthony Martial after hat-trick
Jurgen Klopp pays touching tribute to unsung Liverpool heroes of Premier League title win
Best News
Recent Posts
This website uses cookies to improve your user experience and to provide you with advertisements that are relevant to your interests. By continuing to browse the site you are agreeing to our use of cookies.Ok