Arsenal have been warned they need to “roll out the red carpet” in a bid to retain Pierre-Emerick Aubameyang’s services.

Aubameyang has entered the final year of his contract at the Emirates Stadium and has yet to put pen to paper on an extension.

Arsenal bigwigs could lose the 31-year-old on a free transfer next summer if they are unable to strike a deal.

He would be a major loss having scored 64 goals in 104 appearances since joining from Borussia Dortmund in January 2018.

Premier League legend Danny Murphy believes keeping Aubameyang is the “most important business” for Arsenal this summer because money “would be spent on having to sign a replacement who wouldn’t be as good”. 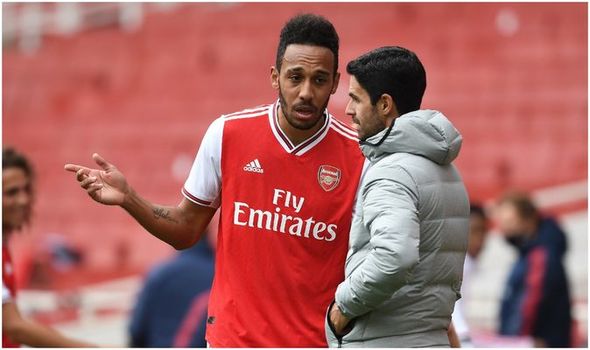 He told the Daily Mail: “Aubameyang’s attitude playing on the left has been very good.

“Maybe having the captain’s armband has helped.

“My message to the Arsenal board would be to roll out the red carpet on a new contract.

“I know they got stung with the Mesut Ozil deal but this isn’t the same.”

Mikel Arteta is confident Aubameyang will sign a contract extension, despite Champions League football being off the agenda next season.

“He is willing to stay with us,” Arteta said last week. “He is really happy where he is.

“He can see what we are trying to do and hopefully he can evolve as well some parts of his game he might feel he can improve. We are pushing him every day.

“I leave that to the football club and the senior people that finalise the contracts.”

Man Utd remaining fixtures: Dates, times and how to watch all remaining games
Manchester City will learn their Champions League fate at 9.30am
Best News
Recent Posts
This website uses cookies to improve your user experience and to provide you with advertisements that are relevant to your interests. By continuing to browse the site you are agreeing to our use of cookies.Ok