Norwich steamrolled in sacrificial first half

After all the David Luiz-induced chaos, Matteo Guendouzi’s burning effigy of Neal Maupay, and Mesut Ozil’s addition to the missing person’s list, Arsenal accepted a Norwich-shaped sacrificial lamb with welcome glee. Daniel Farke’s side arrived at the Emirates flat and deflated, bloodied and beaten after three successive defeats, nursing their last vanishing hopes of survival.

Instead, rather than a valiant last stand, a Hail Mary throw of the dice, those hopes were steamrolled in a chastening 45 minutes, where the absence of supporters only amplified the sense of this being a training ground exercise. In truth, Arsenal should have already been far ahead by the time Tim Krul bungled an attempt at evoking his countryman Johan Cruyff, chopping a turn straight into the path of Pierre-Emerick Aubameyang to give the Gunners the lead.

The second, though, exhibited more artistry than charity. It began with a wonderful lofted ball from Luiz at the base of defence that wiped out Norwich’s midfield. From there, Kieran Tierney combined with Aubameyang, whose cute outside-of-the-foot cutback found Xhaka. The midfielder’s driven finish was ruthless and Arsenal – and Norwich – had what they deserved. 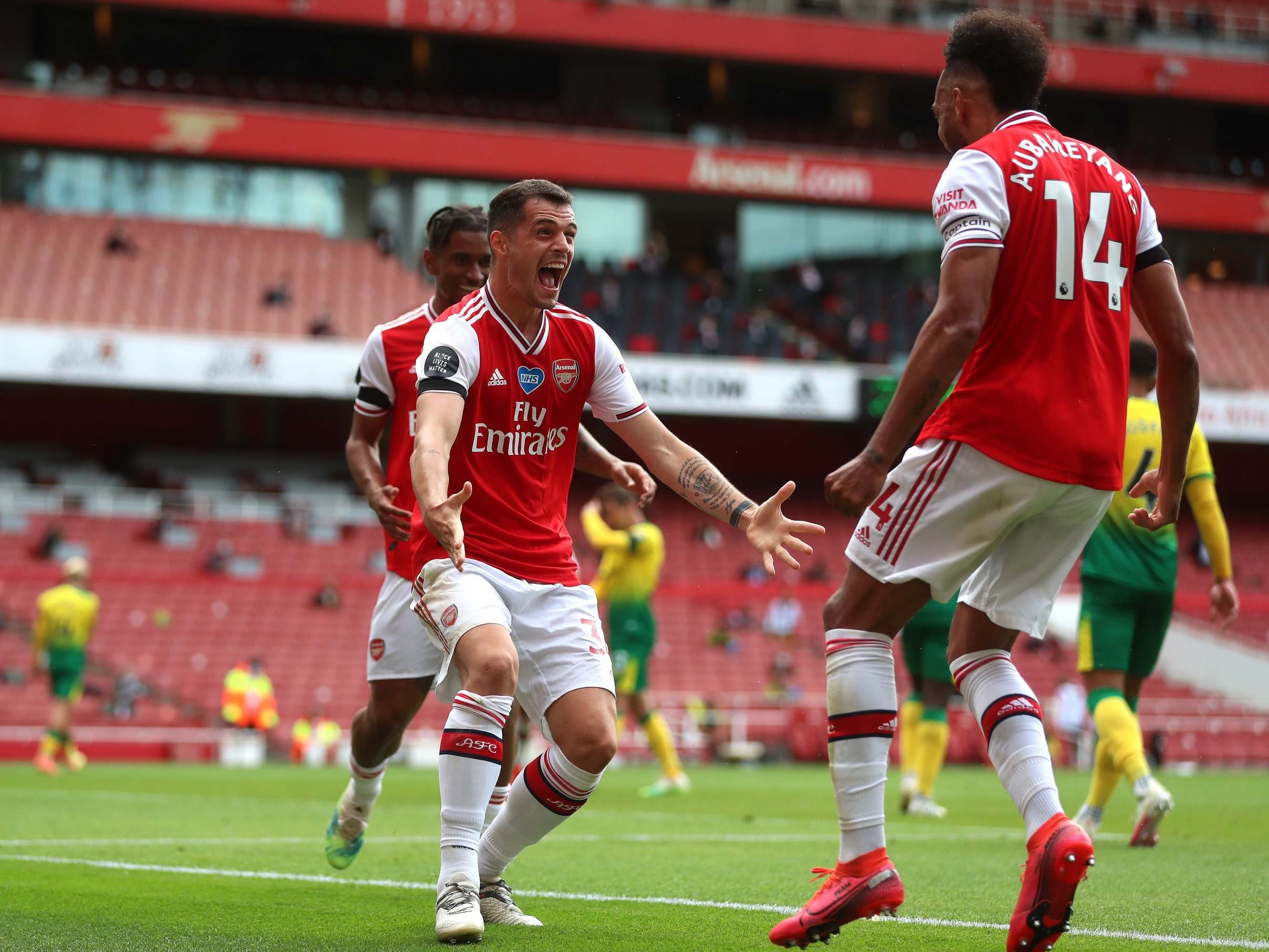 There were a few wry smiles of surprise when Xhaka briefly donned the captain’s armband last week in the absence of Aubameyang. For a player who’s sweary departure against Crystal Palace wrote his own Arsenal obituary, his resurrection has been one of the most important, if understated, aspects of Arteta’s reign. Take any match since the restart and the midfielder’s voice can be heard echoing across the pitch. There is little doubt that the qualities that originally had him elected captain by the dressing room are still prominent. But it’s not just the leadership he provides, it’s the constant, ticking metronome of passes. He is the heartbeat at the base of midfield, providing balance to Arsenal’s 3-4-3 formation, and his transformation from ostracised to indispensable is a testament to both himself and the manager.

Norwich’s forays forwards were few and far between, characterised by uncertainty and a lack of final ball. Teemu Pukki, yanked at half time, is a shadow of his former self. Emiliano Buendia, once paraded with an eye-watering price-tag, was sloppy and wasteful in possession and also faced the cull at the interval. It’s not to say that Norwich were totally innocuous, though.

Defender Ben Godfrey’s long-range shot, while the score was still at 0-0, clattered off the outside of the post with Emiliano Martinez well beaten, while a free-kick from Kenny McLean forced the goalkeeper into a brilliant save. In a short burst of pressure after the break, teenage striker Adam Idah, who provided a sense of urgency in the Canaries’ attack, also came close.

Ultimately, though, those moments were few and far between to mount any fightback. Another horrendous piece of defending, that saw Josep Drmic play a careless pass to Aubameyang allowed the striker to bag his second of the afternoon and put Arsenal of sight just when any doubts were starting to emerge. 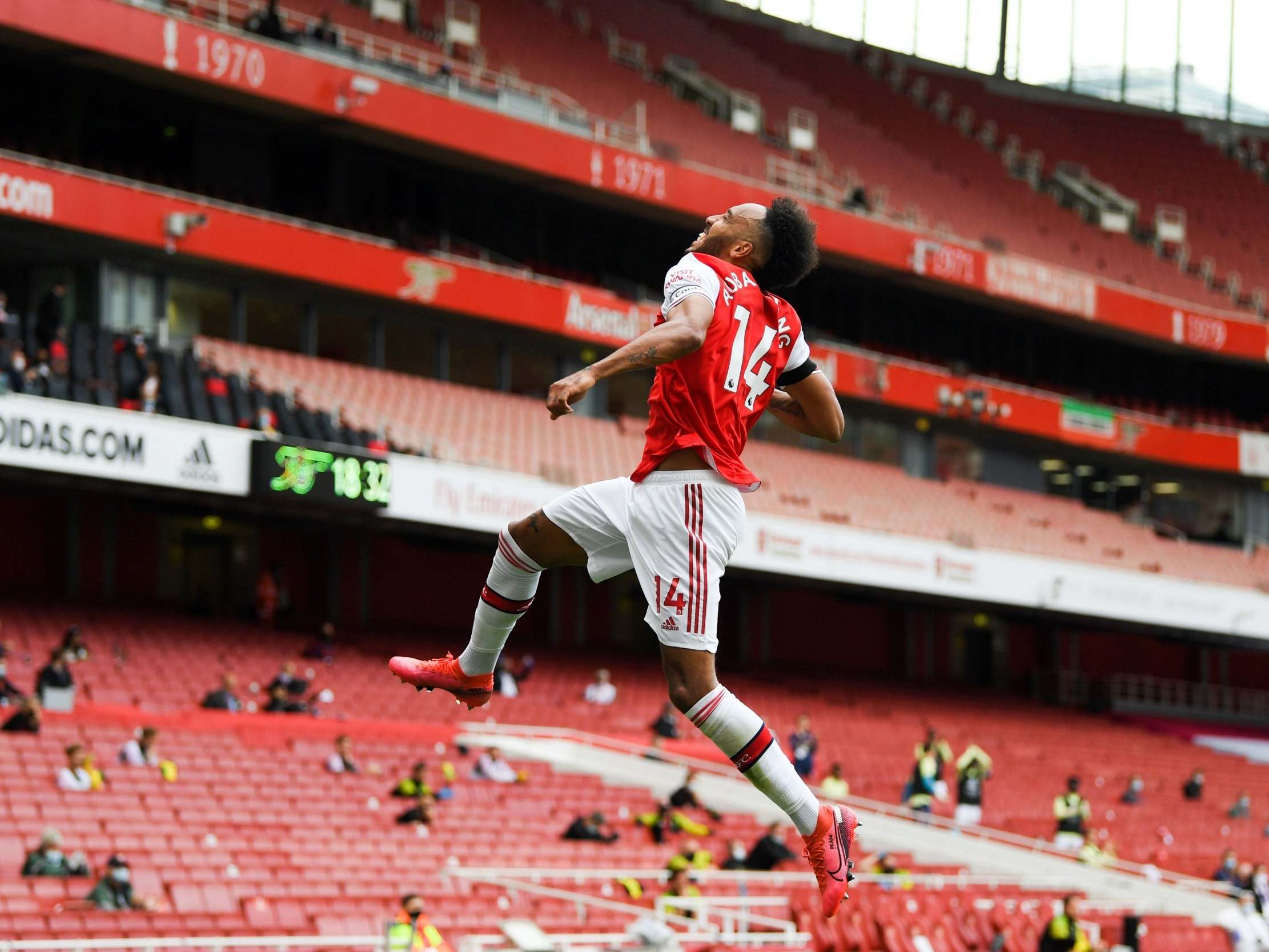 Debut dreams for Cedric as Arsenal’s European hopes are reignited

Cedric Soares, a ghost in the Arsenal squad, the loan signing who never played, the four-year contract to the invisible defender. The signing of the Portuguese full-back and his ties to agent Kia Joorachbian were met with undiluted scorn for a long while. However, finally making his debut after a long rehab from injury, Soares scored a fantastic curled strike from the edge of the box to add Arsenal’s fourth. And, suddenly, all those easy criticisms have been allayed with optimism once again. Three successive wins have Arsenal sixth in the Premier League – albeit having played a game more than most of their rivals – and an FA Cup semi-final booked against Manchester City. There is, somehow, genuine hope of a spot in next season’s Europa League. A reality that, after back-to-back defeats against City and Brighton after the restart, seemed a feat of wild imagination. 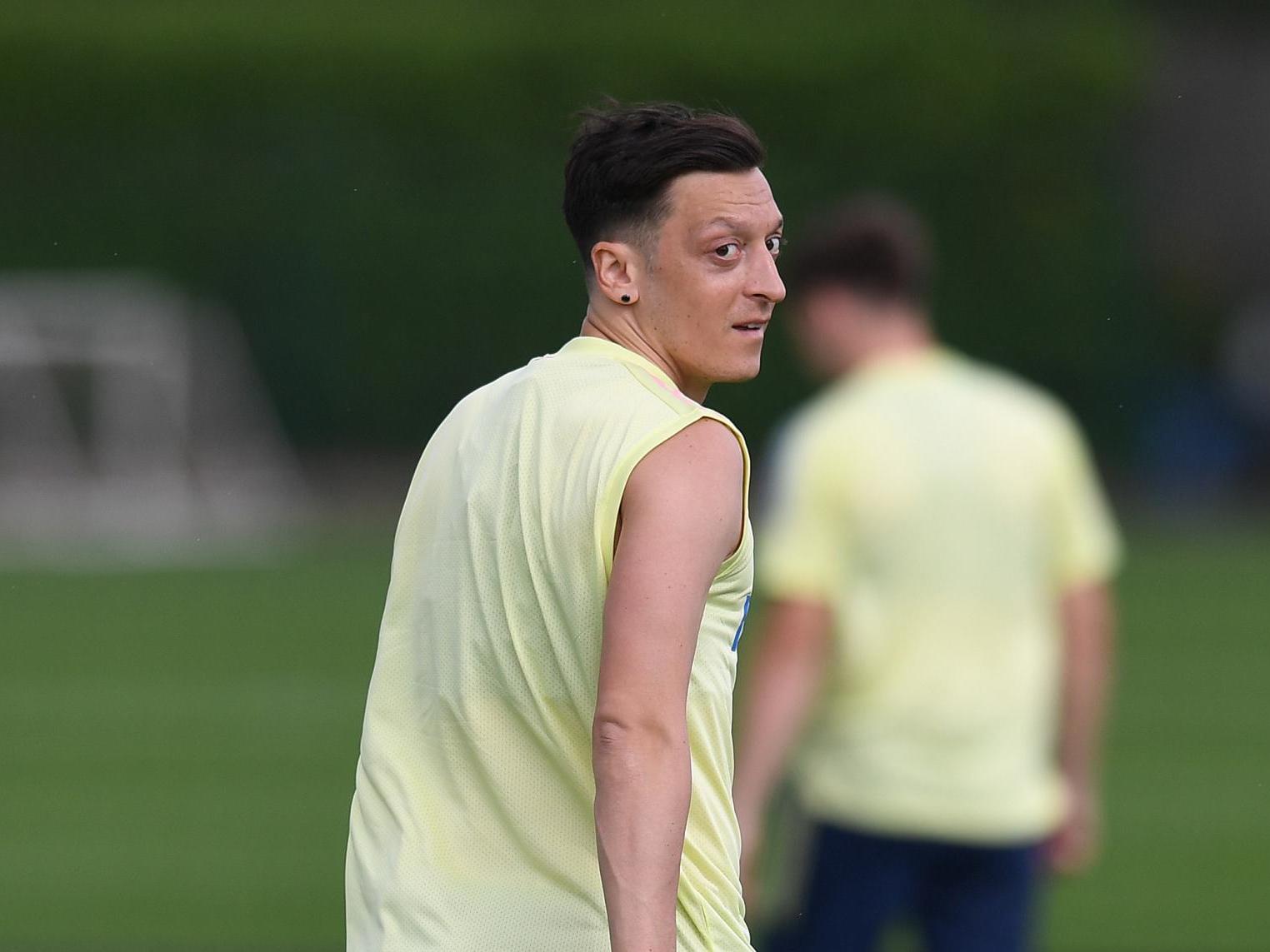 ‘The situation has not changed’: Guendouzi and Ozil absent again

If there are any similarities between Arteta and Unai Emery – if Arsenal fans can avoid shuddering at the thought – it is most easily found in their treatment of Mesut Ozil. What begins as “tactical reasons” rapidly descends into reports of a back injury – in no way linked to a reclining posture in the stands at St Mary’s – and, just like that, Arsenal are back to square one, attempting to push a boulder up the hill and dump £350,000-a-week’s worth of wages on the other side. This was the bluntest addressing of the playmaker’s situation so far by Arteta. It can be dressed up in all matters of disguise – fitness, formation, injury – but the bottom line is, at the moment, that there is simply no space for Ozil in Arteta’s side. For all Emery’s flaws, and subsequent reversal, he came to the same conclusion too.

For that matter, Guendouzi appears to have met the same fate too – sidelined ever since his outburst against Brighton. He was left out of the matchday squad and, if Arteta is as stubbornly true to his values as we’ve seen so far, there’s little sign of that changing anytime soon.

Bournemouth vs Newcastle result: Allan Saint-Maximin shines as visitors thrash Eddie Howe’s dire side
Pep Guardiola exclusive: What Juanma Lillo brings to Manchester City
Best News
Recent Posts
This website uses cookies to improve your user experience and to provide you with advertisements that are relevant to your interests. By continuing to browse the site you are agreeing to our use of cookies.Ok