Swansea 1-0 Brentford: Andre Ayew scores after missing a penalty as Rico Henry is sent off in first leg of Championship play-off semi-final

After 47 games and 51 weeks of Championship football, the futures of Brentford and Swansea could yet swing on three long minutes in south Wales.

With less than half an hour left, this play-off semi-final already hung by a thread before Rhian Brewster jinked past Pontus Jansson inside the Brentford area.

By the time the few hundred inside the Liberty Stadium paused to gather breath, Andre Ayew had missed a penalty, Brentford were down to 10 men, both benches had emptied, a water bottle had been sent flying and Thomas Frank was on the pitch. 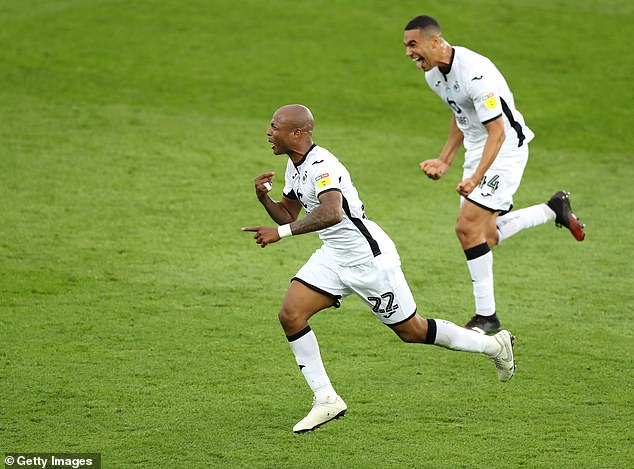 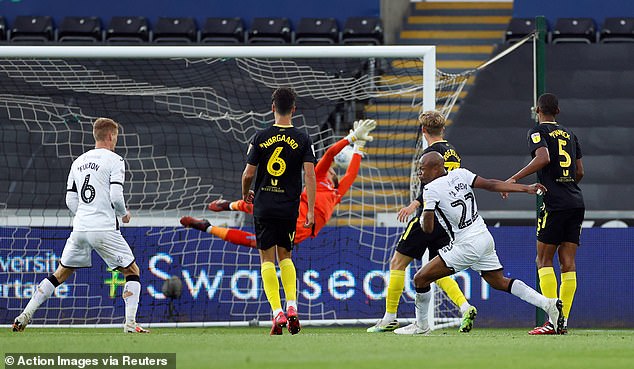 Somehow at the end of it all, it was still 0-0. And that is how it stayed until Ayew made amends with a stunning goal which puts Swansea one huge step closer to the most unlikely promotion.

How Brentford will rue the chaos that turned this tie in Swansea’s favour.

Both sides had missed plenty of chances before Keith Stroud pointed to the spot. And it seemed nothing would go in when David Raya denied Ayew with a brilliant one-handed save.

But relief quickly gave way to fury for Brentford after Rico Henry was shown a straight red card.

Near halfway, the left back flew into a 50-50 with Connor Roberts. It was reckless, but dangerous? Probably not. That did not stop bedlam ensuing on the two benches. Henry did not take the decision well, either. ‘What the f***’ he screamed before kicking a bottle en route down the tunnel.

Suddenly Swansea smelt blood but it took until 81 minutes for the breakthrough to come. In the space vacated by Henry, Ayew picked up the ball and fed Conor Gallagher, who found Jay Fulton just inside the box. He laid the ball back to Ayew who hammered a volley into the top corner.

Now Swansea, who were moments away from missing out on the top six on that barmy final day, are now 90 minutes from Wembley.

For Brentford, meanwhile, three defeats in eight days have left their promotion hopes in tatters. Can they muster the strength to come again? 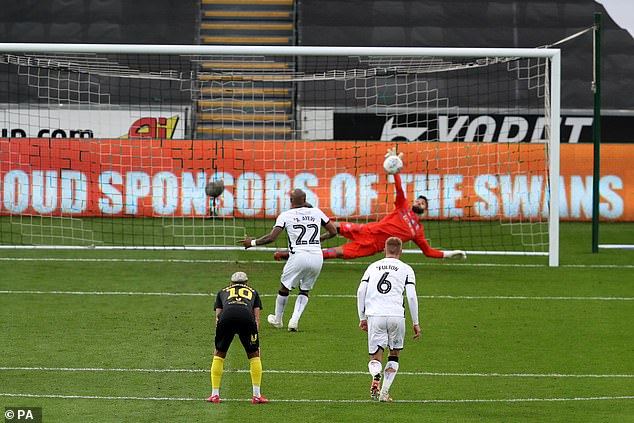 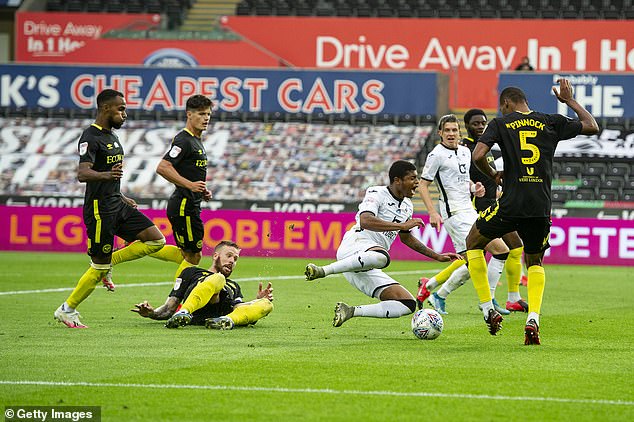 If this is anything to go by, they won’t go down with a whimper. Even after the heartbreak of missing out on automatic promotion, they hit the ground running here – inside 10 minutes, Said Benrahma headed wide before Ollie Watkins’ effort needed tipping away by Erwin Mulder.

Slowly, though, Swansea gained a foothold and midway through the half, their first chance came. Brewster’s four goals were crucial in their post-lockdown push and only a smart save from Raya stopped the him adding to that tally.

Despite the let-off, Brentford required a rethink. So at the drinks break, out came Frank’s tactics board and within seconds his words should have borne fruit.

Watkins fed Henry down the left and the full back sent a cross towards the back post. Watkins was there waiting but his header went wide. 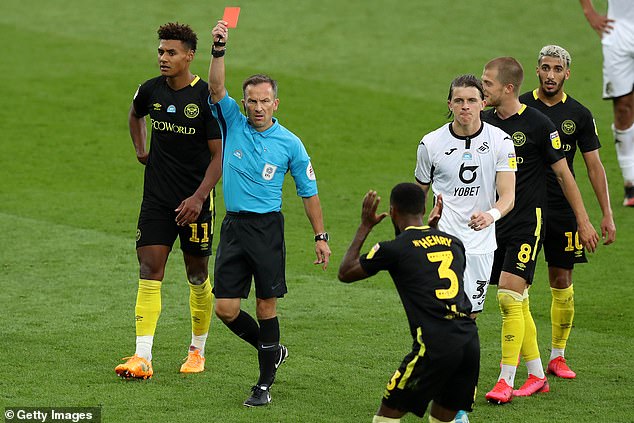 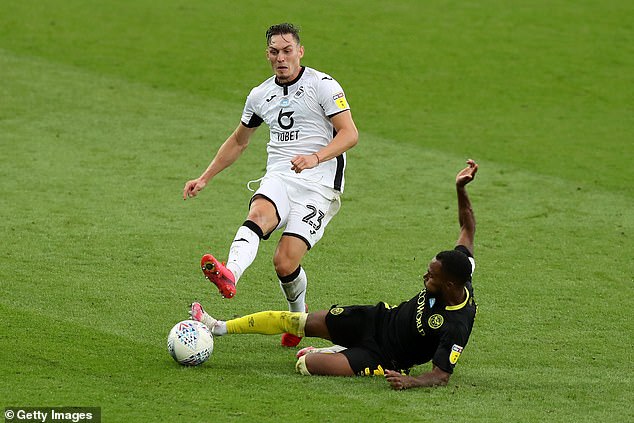 It was a miss that ought to have cost them earlier. Shortly before the break, Brewster saw a header deflected wide and, from the resulting corner, Ayew glanced an effort off the far post. The ball bounced out to Brewster who, from point blank range, could only head straight into Raya’s legs.

Somehow there was still time for more drama in the first 45 miuntes. Again it was Benrahma. He has done more damage than anyone since Championship football returned and when he picked the ball up 30 yards out and jinked into space, the only surprise was his shot flew over.

After the break, more close shaves. Almost immediately, another Ayew header at Raya at full stretch before Mathias Jensen fired wide after being slid in by Benrahma. As the half wore on, Brentford reassumed control but Swansea rallied once more. Fulton fired straight at Raya from distance before Ayew curled his own effort wide. Then, after the chaos, he showed a cool head to make the difference.

Battle between the Big Six clashes: All the top teams fixtures

Aston Villa’s survival feels better than promotion after ‘people had us relegated’, says Dean Smith
Ecstasy and agony on the final day as Aston Villa confirm survival
Best News
Recent Posts
This website uses cookies to improve your user experience and to provide you with advertisements that are relevant to your interests. By continuing to browse the site you are agreeing to our use of cookies.Ok