Cardiff battled to a 0-0 draw at Blackburn despite going down to 10 men.

In a tight game of few clear openings, the Bluebirds had set themselves a solid platform on which to potentially snatch three points but were undone in the 69th minute when Lee Tomlin was sent off after receiving his second booking in the space of 11 minutes.

But Neil Harris’ team regrouped and deprived in-form Blackburn of any space in which to create chances.

The best opportunities came in the opening period, with Thomas Kaminski producing another assured performance and Alex Smithies saving impressively from Adam Armstrong, who had the game’s best chance.

Blackburn lacked the composure to make the decisive contribution but are three unbeaten in the league without conceding. Cardiff remain unbeaten on their travels in the league this season.

Tony Mowbray was without the injured Darragh Lenihan, so Daniel Ayala made his debut – one of two changes. Harris refreshed his side with Joe Bennett and Tomlin after defeat to Reading.

Former Blackburn player Junior Hoilett had the game’s first sight of goal in the sixth minute when he cut in from the left and whipped one towards the top corner that required a stunning fingertip save from Kaminski to repel. 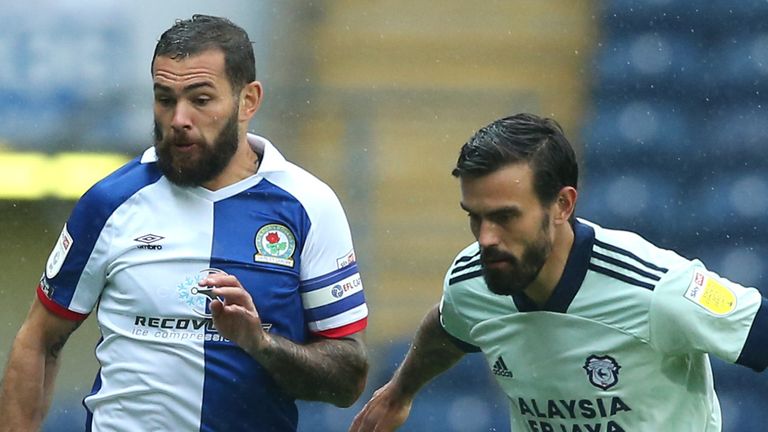 The Bluebirds were comfortable for most of the half and Kaminski once again proved his worth as he expertly tipped a Sheyi Ojo effort around the post after the winger had engineered space.

But Rovers enjoyed a strong end to the half. First, Tyrhys Dolan won possession in his own half and Armstrong was able to race clear of the scrambling Cardiff defence, only to be denied by Smithies, who got a touch on the attempted dink before the ball was hooked clear.

Deep into injury time, the ball fell invitingly to Ben Brereton on the edge of the box, but Smithies got down well to smother his rasping drive.

Neither side could take control as the second half began, though Sean Morrison headed straight at Kaminski early on and the impressive Kieffer Moore nodded wide soon after, under pressure from Ayala.

Cardiff shot themselves in the foot 21 minutes from the end, though, when playmaker Tomlin received his marching orders for a needless foul on Sam Gallagher deep into Blackburn territory that earned him a deserved second booking.

It gave Mowbray’s side the impetus and they set about trying to make the breakthrough. Amari’i Bell’s teasing cross 16 minutes from time gave Gallagher a half chance, but he could not make the right connection.

Morrison almost diverted into his own net in stoppage time and Joe Rothwell fired wide, but Cardiff held on relatively comfortably.

Raul Jimenez signs new Wolves contract to end any doubt over his future
Sale's clash with Worcester postponed after positive COVID-19 tests
Best News
Recent Posts
This website uses cookies to improve your user experience and to provide you with advertisements that are relevant to your interests. By continuing to browse the site you are agreeing to our use of cookies.Ok