Kenny McLean’s lucky late strike rescued a point for Norwich as they drew 1-1 at Brentford.

The Canaries were trailing to a first-half Ivan Toney goal, his eighth in six Sky Bet Championship matches.

But, for the fourth match running, Norwich struck with time running out as McLean’s deflected shot salvaged a draw.

Norwich should have opened the scoring after a superb piece of trickery from Emi Buendia. 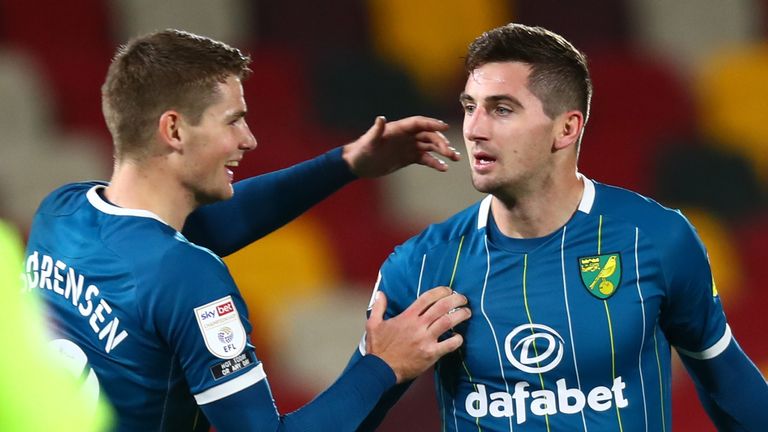 The Argentinian gave Henrik Dalsgaard the slip and put Ethan Pinnock on his backside inside the area, but saw his shot from six yards tipped over by Bees goalkeeper David Raya.

But it was Brentford who took the lead after a lightning counter-attack from their new-look strike-force.

Ollie Watkins and Said Benrahma may have departed but their replacements, Toney and Saman Ghoddos, still combined with Bryan Mbeumo to devastating effect.

Ghoddos burst forward before feeding Mbeumo, who reached the byline before cutting the ball across goal for Toney to slide home.

Toney almost had a second shortly after but Tim Krul dived full length to claw away his header, with Mbeumo putting the rebound into the side-netting.

After the break Brentford were denied a second when Toney’s header back across goal found Dalsgaard right in front of goal but the defender’s finish was too close to Krul.

Before the match Daniel Farke had compared Norwich’s mixed start to the campaign to a quiet night in with actress Keira Knightley.

But as they chased an equaliser, Buendia’s attempt to ‘bend it like Beckham’ from the edge of the box resulted in a complete air-shot.

However, Norwich have developed a happy knack of scoring last-gasp goals this season – including winners in their last three matches.

And with three minutes remaining, McLean’s speculative drive was going wide until it deflected off Mads Bech Sorensen, wrongfooting Raya as the ball rolled into the net.

Fleetwood 1-0 Shrewsbury: Ched Evans scores winner for Town
Rochdale 2-2 Sunderland: Matt Lund double thwarts Black Cats
Best News
Recent Posts
This website uses cookies to improve your user experience and to provide you with advertisements that are relevant to your interests. By continuing to browse the site you are agreeing to our use of cookies.Ok