Football from the future, to see Griffin Park into history.

The old ground’s last night might well have been its greatest, and could yet mean Brentford’s first match at their new stadium is in the Premier League.

Their very next match is the Championship play-off final at Wembley, thanks to a sweeping 3-1 win over Swansea City, and the kind of performance that has everyone purring about why they would be such an exhilarating and distinctive addition to the elite end of English football.

The Welsh side, who had been controversially 1-0 ahead from the first leg, couldn’t live with the sheer force of Brentford’s play.

The only element missing from an otherwise perfect night was the fans, but the club hierarchy that were present made enough noise. The players similarly rose to the occasion, doing what charismatic manager Thomas Franks insisted they would on the eve of the game and offering “a last magical moment at Griffin Park that can stay with the fans forever”.

Except it wasn’t just one moment, but many, to add up to one special game. It wasn’t the only Frank comment that struck a chord during that game either.

Brentford were certainly “ready to go out and play” and really did “come flying”. They were true to his word and offered one of those “defining games”.

They absolutely weren’t nervous, as Frank promised. Not even when Rhian Brewster claimed that fine 78th-minute goal to make it 3-2 on aggregate and really turn up the tension. Brentford stood strong when it mattered.

The assertive mindset of the side may actually be the most important element of this match, especially as regards what’s next. 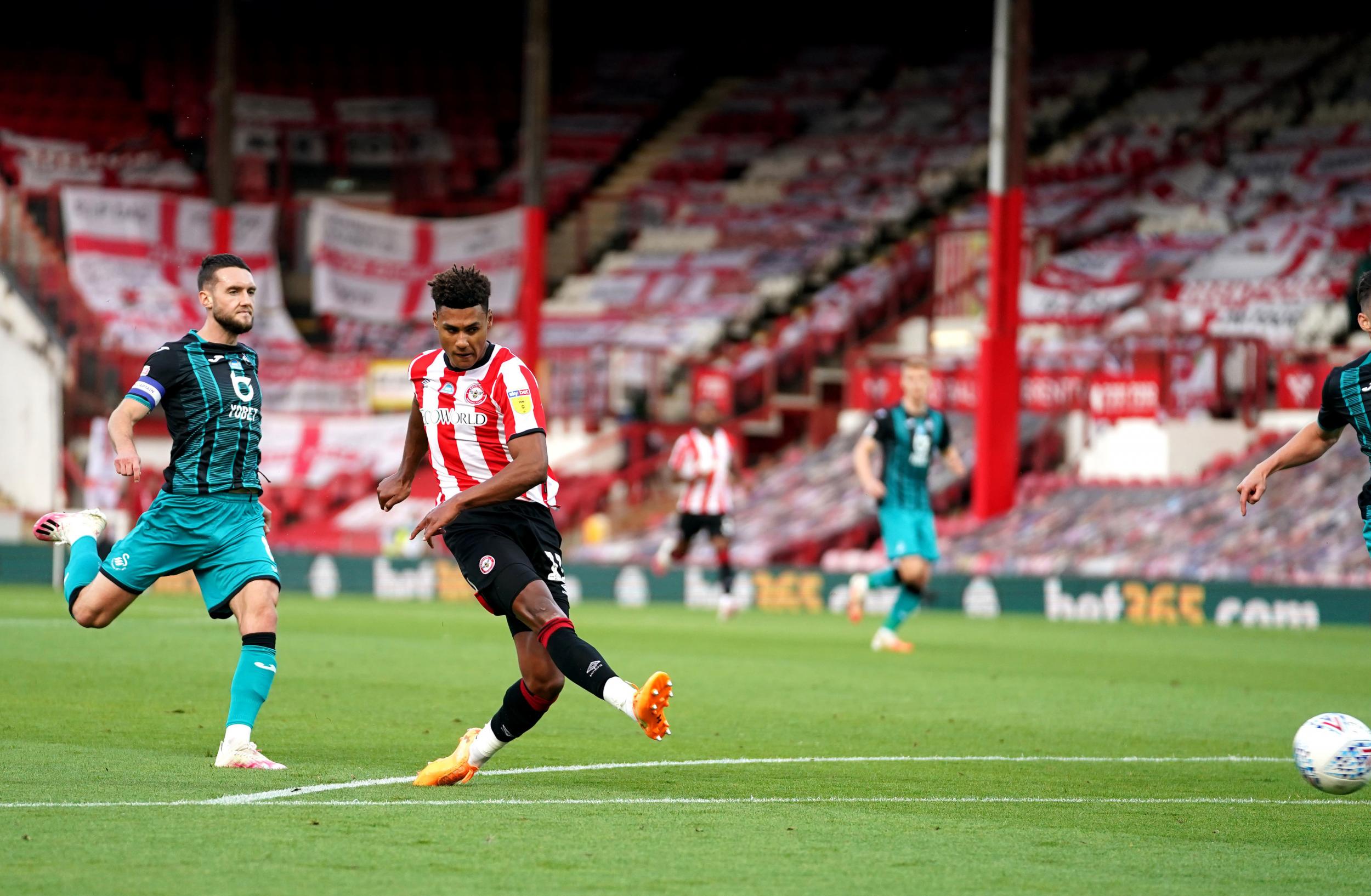 Many might have expected them to fall away here, to suffer more frustration. If the play-offs are all about momentum, Brentford apparently had none. Superficially, they looked like they were falling apart.

They’d blown two great chances to go second with two galling defeats to Stoke City and Barnsley, only to then lose the first leg of this play-off.

But that’s what it was, superficial. The unjust red card for Rico Henry in the first leg had complicated complexions of their performance away to Swansea.

They were actually in “combat mode”. They showed that with full commitment here. And they now have so much more than momentum.

That could be seen in the piece of play that set the pace here, that set the tone. This was one of the “moments” Frank was talking about. And it came from a standing start.

Goalkeeper David Raya threw the ball out to Mathias Jensen, he turned inside and played the sleekest of through balls, and Ollie Watkins raced through the finish.

It wasn’t just box to box in less than 10 seconds. It was from doubt and defeat to conviction and victory. There really was no looking back, no hesitation.

Moments later, the livewire Said Benrahma had crossed for Emiliano Marcondes, to finally and fatefully put Brentford into the lead.

The first 22 minutes were among the best spells of football you’ll see this season. Even one of Swansea’s rare first-half attacks ended up showcasing Brentford’s excellence.

Connor Roberts burst through to bring a save from Raya, and allow the goalkeeper to fire the ball forward for Benrahma to then strike the inside of the post.

There was the lingering fear Brentford could regret such misses, and many an attack that finished with something overly ambitious rather than calculatedly precise.

That fear grew after Brewster’s fine lifted finish, since Bryan Mbeumo had seemed to make the game safe with his 46th-minute volley.

The manner of Pontus Jansson’s mistake would have only fostered it, made lesser sides feel it was their fate to be frustrated.

It’s difficult to imagine what the Brentford players must have been thinking in that moment. This was a side that had blown their first chance at promotion, then blown the final league game in the final moments against a relegation-threatened Barnsley.

This was thereby the ultimate test of bottle, of how much such moments accumulate in the minds of players. It ended up being a showcase of resilience, to go with their rousing football. Swansea more than played their part. They were pushing Brentford to the limit, everyone on the pitch aware how much was loaded into these final minutes. That’s what the play-offs can do. That’s what Brentford rose to.

That defiance could be seen in every punched Raya clearance, every Ethan Pinnock header, ever Janssen recovery.

Without the fans, though, this wasn’t about the sights. It was about the feel, the senses.

The line before the game was that Griffin Park is a stadium where you can “smell the history”. Brentford can now smell the Premier League. The old ground was given a fine send-off.

But this club is now all about the future, most of all what happens at Wembley in five days’ time.

Manchester City 'to rival United for signature of Jack Grealish'

Cristiano Ronaldo's hopes of finishing Serie A's top scorer fade away
Dean Henderson: Manchester United goalkeeper’s new contract talks reach crucial stage
Best News
Recent Posts
This website uses cookies to improve your user experience and to provide you with advertisements that are relevant to your interests. By continuing to browse the site you are agreeing to our use of cookies.Ok