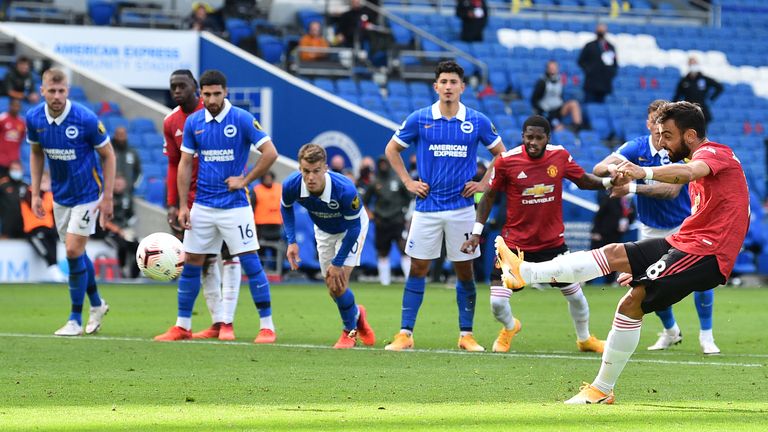 Neal Maupay went from hero to villain as his stoppage-time handball gifted Manchester United a penalty which Bruno Fernandes converted to secure a 3-2 victory at the Amex Stadium.

Brighton thought they had snatched a deserved point when Solly March headed home to cancel out Marcus Rashford’s brilliant solo goal to level the score at 2-2 in the fifth minute of added time.

But Maupay, whose first-half Panenka penalty was cancelled out by a Lewis Dunk own goal, was adjudged to have blocked Harry Maguire’s goal-bound effort with his arm at the death, and after a VAR review Fernandes dispatched a penalty of his own in the most dramatic of finales.

Fernandes’ ninth Premier League goal sealed the unlikeliest of victories for Ole Gunnar Solskjaer’s below-par side, who saw Brighton hit the woodwork no fewer than five times, with Leandro Trossard denied by the frame of the goal on three occasions.

Brighton host Manchester United again in the fourth round of the Carabao Cup on Wednesday at 7.45pm – live on Sky Sports Football.

The Seagulls then travel to Everton in the Premier League on Saturday at 3pm, before United host Tottenham on Super Sunday at 4.30pm – live on Sky Sports Premier League.

Crystal Palace vs Everton – Premier League: Live score and updates
Bruno Fernandes slams Man Utd team-mates after dramatic late Brighton win
Best News
Recent Posts
This website uses cookies to improve your user experience and to provide you with advertisements that are relevant to your interests. By continuing to browse the site you are agreeing to our use of cookies.Ok