An all-action masterclass from Naby Keita and mastery from Mohamed Salah drove Liverpool closer to their objective of surpassing the record points total in English top-flight history against a Brighton side seeking to better their highest haul in the Premier League.

Fourteen positions and 53 points separated the teams ahead of kick-off, but there was equality in the way they both preserved with their stylistic DNA.

Graham Potter’s charges could not ultimately oust the champions, but their courage and purpose in possession aligned with a refusal to cave will serve them well.

“They left two offensive players between the line so when they won the ball it was difficult to protect,” Klopp said of Brighton.

“When you lose the ball in the wrong moment it was difficult to defend. So they deserved the goal but we scored the third goal then could have scored more with some really good chances.”

Brighton have already equalled their points total (36) for last season and improved their goal tally (36). The decision to appoint and show faith in Potter seems inspired.

They are just five off the pace to record 40 points, their highest in the Premier League, managed in 2017-18.

Their triumph at the Amex Stadium was powered by Keita and ensured by Salah. The midfielder provided strong tonic to the suggestion Thiago should be recruited by Liverpool, turning in a showing of offensive might and defensive nous.

Keita’s ball recoveries led to goals and he was keeping them out at the other end in-between spells of dribbling wizard. He was everywhere, doing everything and set the tone in the opening stanza of play.

“If we’re short and not quite at our best, we’ll be defeated,” Potter said ahead of kick off, and 10 minutes in, he’d have feared the worse – a demolition.

England’s best arrived with aggression in the press, armed with the knowledge that Brighton would play out from the back. 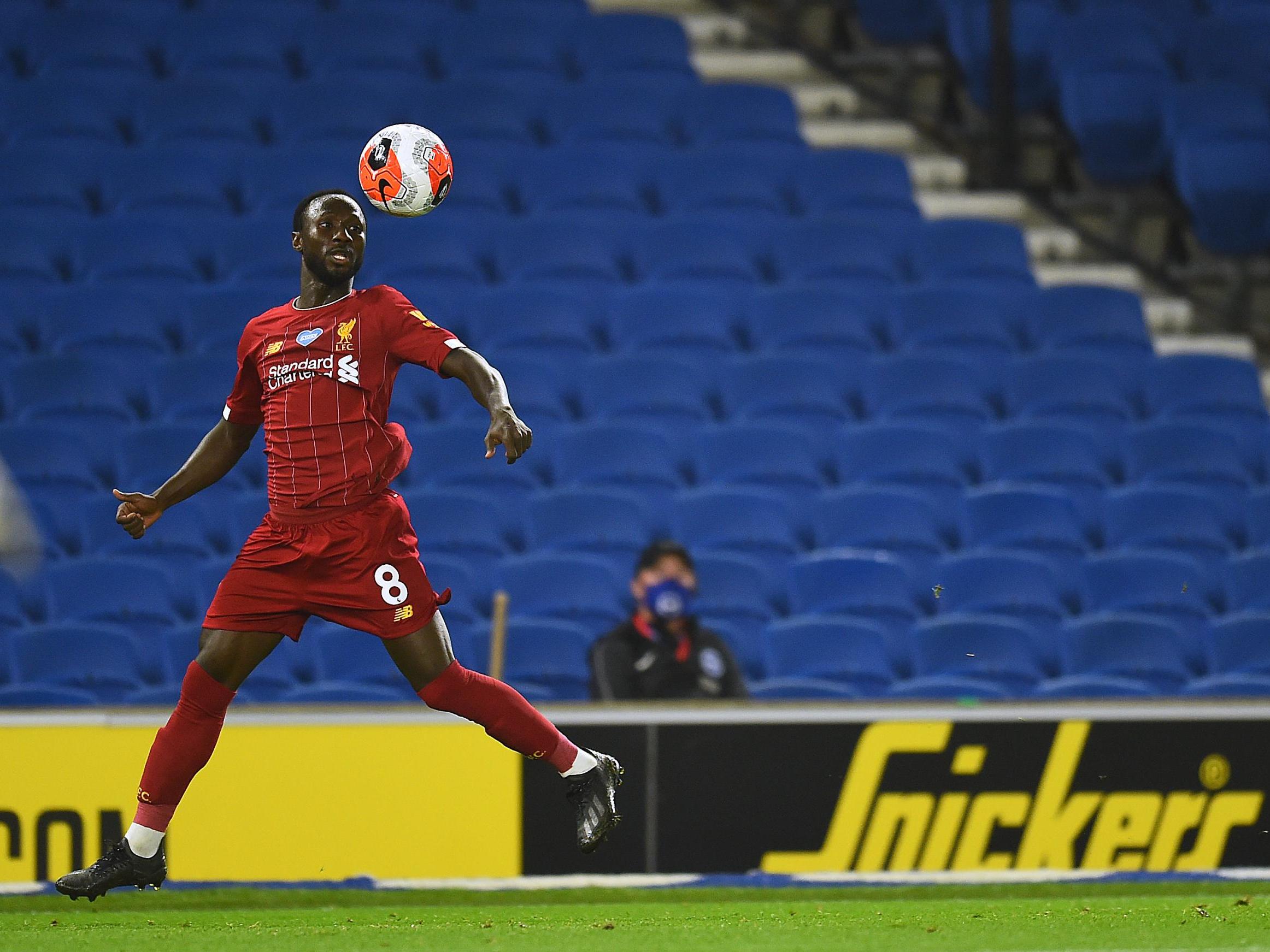 The hosts bravely stuck to their approach and were ruthlessly punished for it. Goalkeeper Mat Ryan fed Davy Propper, who was hunted by Keita.

The Guinea international recovered the ball, slipping a pass across goal which Roberto Firmino left for Salah to bury.

Liverpool set a trap that Adam Webster succumbed to, with Keita and Firmino combining before Jordan Henderson struck a beauty into the top left from 25 yards.

It looked like curtains in the first half let alone in the game for Brighton.

Liverpool kept threatening, chiefly through Keita but Potter’s men didn’t collapse and clawed their way back into the contest.

Pascal Gross and Neal Maupay combined down the inside left channel, with Gini Wijnaldum partially thwarting the move, but freeing up Leandro Trossard.

He struck from 12 yards, but teenager Neco Williams who deputised at left-back for Andy Robertson, superbly blocked it.

Liverpool didn’t heed the warning and Brighton were not to be denied again.

Lamptey and Trossard, their standout players, fused in scorching effect to squash the visitors’ comfort. 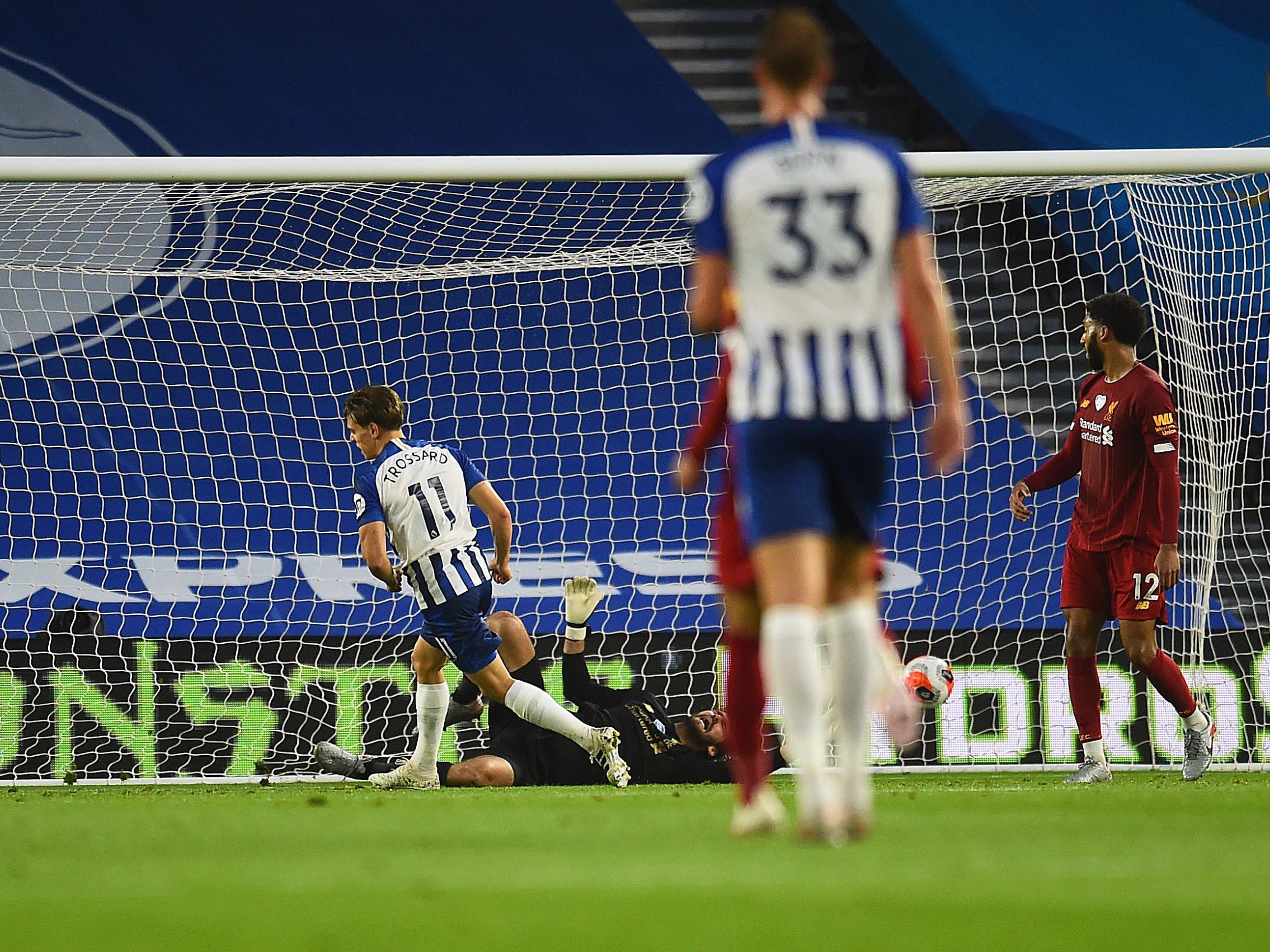 The 19-year-old blitzed down the right after a lovely reverse ball from Gross, curling a cross towards Trossard. He met it sweet as you like, giving Brighton a deserved goal and a lifeline in the encounter.

Williams, the young right-back operating on the opposite flank, was removed at half-time for Andy Robertson after picking up a booking.

Lamptey was constructing all sorts of trouble for Liverpool and Brighton would’ve wondered how they weren’t level before they fell behind again.

Klopp through on Fabinho and Sadio Mane for the imperious Keita, who was the man of the match before his removal, and Oxlade-Chamberlain.

Liverpool regained control and superiority in the clash, which told when an intelligent run, sharp anticipation and glancing header at the near post from Salah off Robertson’s corner made it 3-1.

The Egyptian has been directly involved in 129 goals in 148 appearances for the Merseysiders in all competitions, scoring 94 goals and assisting 36.

He is motoring towards another Golden Boot award, with Jamie Vardy in his sights, while Liverpool continue to write new history.

What channel is Chelsea vs Wolves on? TV, live stream info for Premier League match

Championship highlights and round-up: West Brom leapfrog Leeds into top spot, Swansea win
Solskjaer sends defiant message to Man Utd chiefs over Pogba contract
Best News
Recent Posts
This website uses cookies to improve your user experience and to provide you with advertisements that are relevant to your interests. By continuing to browse the site you are agreeing to our use of cookies.Ok