Carlton Cole has slammed Chelsea fans for criticising him after he was seen cheering West Ham’s win over the Blues in midweek. The former England international came through the youth ranks at Stamford Bridge but spent the majority of his career with the Hammers.

And Cole couldn’t contain his delight as West Ham beat Chelsea 3-2 on Wednesday night thanks to a late strike from Andriy Yarmolenko.

The 36-year-old was seen wildly celebrating during a Sky Sports watchalong with Steve Sidwell, Zac Djellab and Adam Smith.

Cole quickly came under fire from Chelsea supporters for his enthusiastic reaction but took to Twitter to defend his actions.

“How any Chelsea supporter can criticise me for celebrating West Ham scoring and winning is beyond me,” Cole wrote. 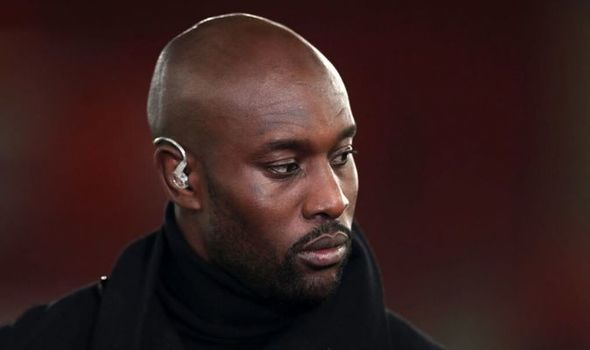 “Let’s get this right! I’m supposed to not celebrate because you gave me a chance in my youth days? Of course I’m grateful for that but I spent my best and longest years at the Hammers, who gave me a chance too, and continue to give me support in my coaching development.

“Plus, we needed the points to stay in the league. Circumstances have made it this way. Not that I don’t want Chelsea to do well, but I’d celebrate like that against any team we grinded [sic] a win from, especially in these times…

“Don’t be bitter. Chelsea will always hold a special place in my heart.

Cole began his professional career at Chelsea but only made 31 senior appearances for the Blues and was sent on loan three times in four years.

Cole hung up his boots in 2018 but has since been named club ambassador at the London Stadium and been given an opportunity to shadow youth coach Jack Collison.

The former striker therefore has an understandable interest in West Ham staying in the Premier League, with the win over Chelsea potentially pivotal in staving off relegation.

The Hammers are now three points clear of the drop zone with six matches remaining in the 2019/20 campaign.

As for Chelsea, the Blues missed the chance to move up to third and are locked in a tense battle for the final Champions League qualification spot.

Frank Lampard’s men are currently a point behind Leicester and just two clear of Manchester United and Wolves.

The Blues also have FA Cup commitments to worry about with a semi-final clash against United on the way while they are also still in the Champions League but need to overturn a 3-0 deficit against Bayern Munich.

Chelsea: Why Frank Lampard is stuck with struggling Kepa Arrizabalaga whether he likes it or not
Chelsea boss Frank Lampard opens up on Hakim Ziyech and Timo Werner transfer delay
Best News
Recent Posts
This website uses cookies to improve your user experience and to provide you with advertisements that are relevant to your interests. By continuing to browse the site you are agreeing to our use of cookies.Ok