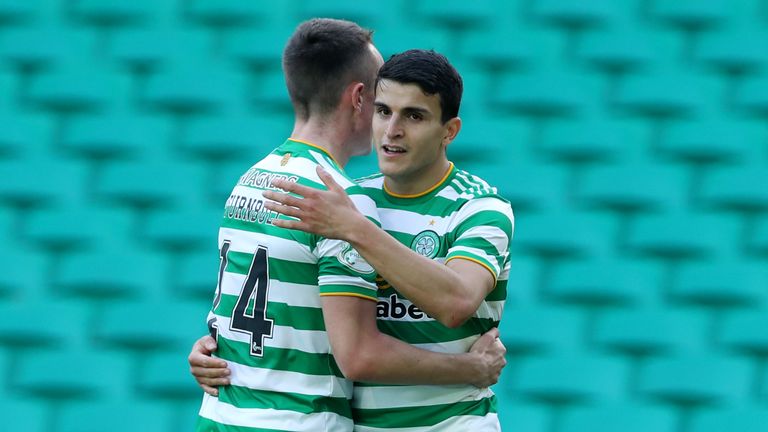 Celtic remain on the tail of Rangers at the top of the Premiership following their convincing 3-0 win over Hibernian at Parkhead.

Midfielder Callum McGregor drove the home side ahead in the seventh minute of the keenly-awaited fixture and the visitors missed a couple of chances before striker Albian Ajeti notched from close range in the 37th minute, although he injured himself in the process and was replaced by Odsonne Edouard.

Neil Lennon’s side had a much firmer grip of the second half and Hibs keeper Ofir Marciano made key saves before and after Mohamed Elyounoussi added a third in the 75th minute.

Celtic moved to within a point of the Light Blues with a game in hand although with the Old Firm contest coming up on October 17, Ajeti’s injury – and the ankle knock which caused James Forrest to miss the game – will be a worry for Lennon.

He made three changes from the Europa League win over Riga on Thursday night – attackers Ajeti and Elyounoussi and wing-back Jeremie Frimpong – and they all contributed to what in the end was a decisive win.

Hibs boss Jack Ross kept the same side which started the 2-2 draw against Rangers last week but brought back loanee Jamie Murphy who had been unable to play against his parent club.

McGregor’s early goal amid an open start to the game was all about good technique.

The Scotland midfielder took a pass from Ryan Christie outside the box and steadied himself before drilling the ball low past Marciano and into the corner of the net for his second goal in a week.

That opener failed to supress the sprightly visitors who looked threatening when they moved up the pitch, exemplified in the 16th minute when striker Christian Doidge fired over the bar from a Kevin Nisbet cut-back.

Nisbet then chased a long ball from Joe Newell and out-muscled Hoops defender Shane Duffy but also fired high and wide with his shot on the angle.

Ajeti’s counter came at a cost to the Switzerland international.

After good work from Christie inside the Hibs box, Elyounoussi’s shot was parried out by Marciano. Ajeti quickly returned the ball into the net for his fifth goal in nine appearances but pulled up with what looked like a hamstring problem and had to be replaced immediately by Edouard.

The match continued apace. A long-distance drive from wide-man Martin Boyle cleared the bar and at the other end, the tireless Frimpong knocked a Greg Taylor cross over from a few yards out.

David Turnbull replaced Christie for the start of the second half with the experienced Lewis Stevenson on for Josh Doig to try to contain Frimpong with Murphy soon on for Drey Wright.

However, before that, Marciano saved a long-distance effort from fellow Israel international Nir Bitton and he also denied Parkhead skipper Scott Brown, Turnbull and McGregor, all of whom had powerful shots on target.

Celtic were well on top and Hibs’ belief dissipated.

Any time that Hibernian did fashion a chance, invariably they failed to hit the target as Newell did in the 75th minute with a drive from 14 yards which went over the bar before Nisbet’s shot was blocked by Duffy.

Celtic showed how it should be done when Turnbull played in Elyounoussi and he confidently slipped the ball past Marciano to ensure a smooth finish.

Celtic travel to Sarajevo for their Europa League qualifying play-off round clash on Thursday night, before visiting St Johnstone in the league on Sunday lunch time in a game you can see live on Sky Sports Football.

How Bamford has adapted while Dan James and Todd Cantwell can offer Leeds more
Bournemouth 1-0 Norwich: Arnaut Danjuma strike hands Cherries victory
Best News
Recent Posts
This website uses cookies to improve your user experience and to provide you with advertisements that are relevant to your interests. By continuing to browse the site you are agreeing to our use of cookies.Ok