Frank Lampard stood composed, surveying the scene at the end of it all, prowling around his technical area, arms folded and focused. He knew his team had taken a giant leap towards Champions League qualification and, as such, a respectable first season for him in charge.

On the back of the West Ham defeat and then having watched the relentless charge of Manchester United prior to this match and seeing Leicester City finally secure a win, this was a test of nerve for the young manager’s team.

And after a frustrating start, that test was passed with distinction. With Christian Pulisic, Mason Mount and Ross Barkley to the fore, Chelsea were far too good for a limited Watford side, whose chief current hope is the poor form of the relegation rivals. Home games against Norwich and Newcastle will determine their fate. This game was over pretty much by half time. 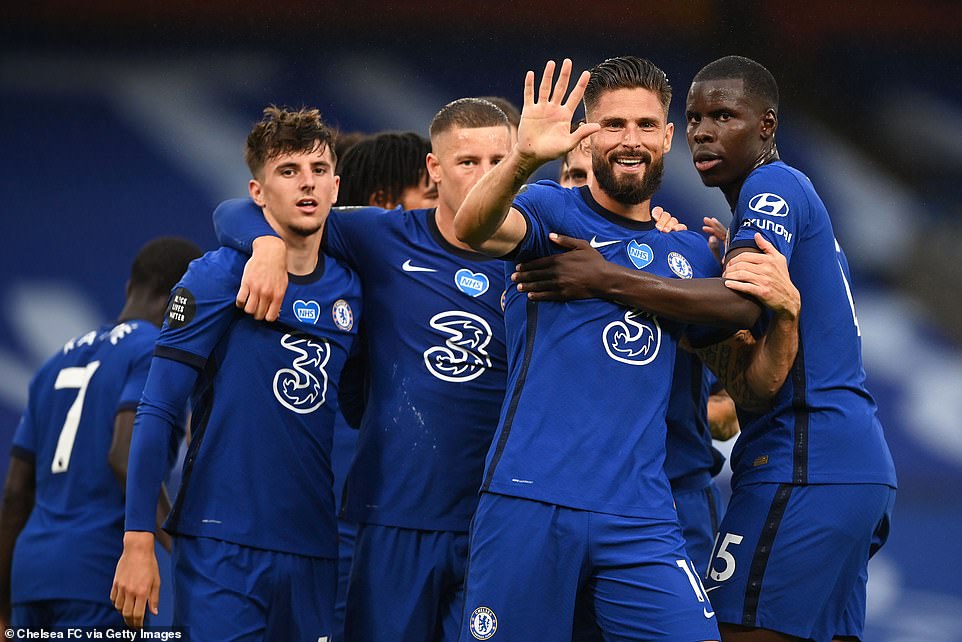 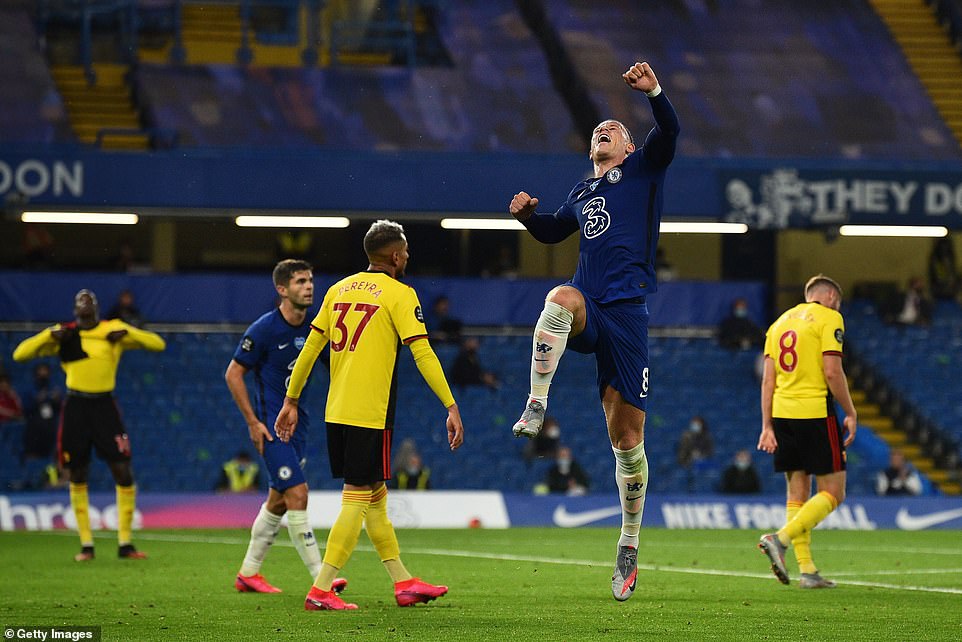 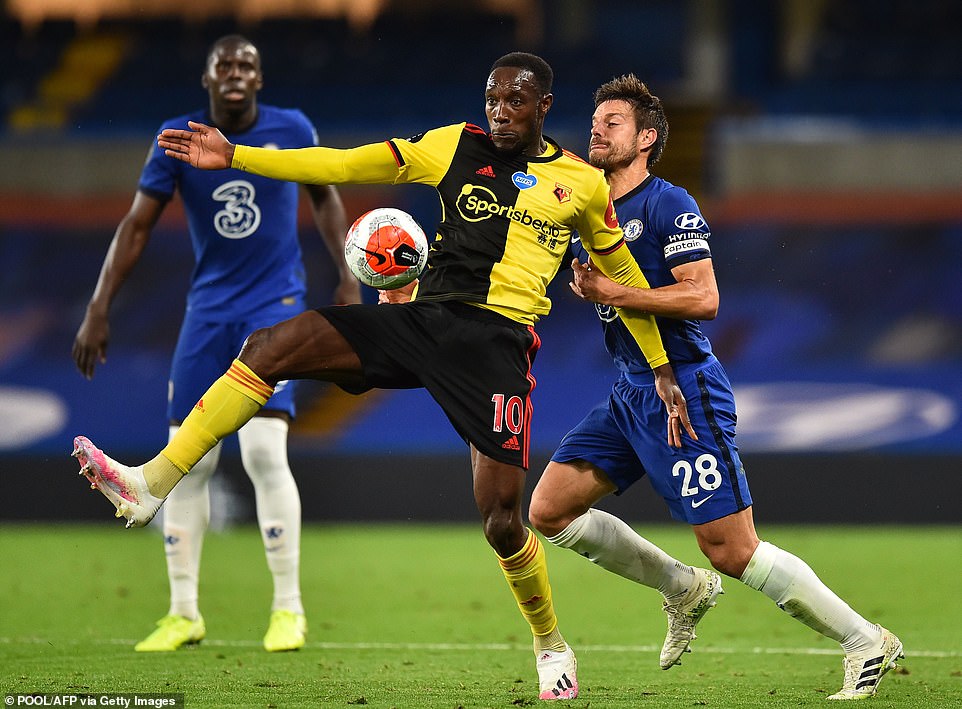 Watford suffered a blow to their hopes of staying up, sitting just a point above the relegation zone with Aston Villa yet to play

Ross Barkley finished off the comfortable win, turning in Cesar Azpilcueta’s cross on 88 minutes, Chelsea still playing at relentless pace to this finish and never threatened by their opponents.

If lawyers in Switzerland confirm that Manchester City are banned from the Champions League, fifth may be good enough for Lampard and Wolves’ defeat makes that much more likely now. Still, they won’t rest until fourth is secured and this was a good recovery from the West Ham set back.

There was plenty of endeavour but little incision during the opening quarter. Chelsea dominated possession while Watford chased their opponents assiduously around the pitch, denying them space and limiting their goal-scoring opportunities. As such, for Watford, it was a job well done. It didn’t make for the greatest spectacle, however.

Other than Olivier Giroud’s chance on 19 minutes when, played in by Christian Pulisic, he forced a fine save from Ben Foster, kicking away with his feet as the striker shot across him, there was hardly anything to show for all the energy expended. 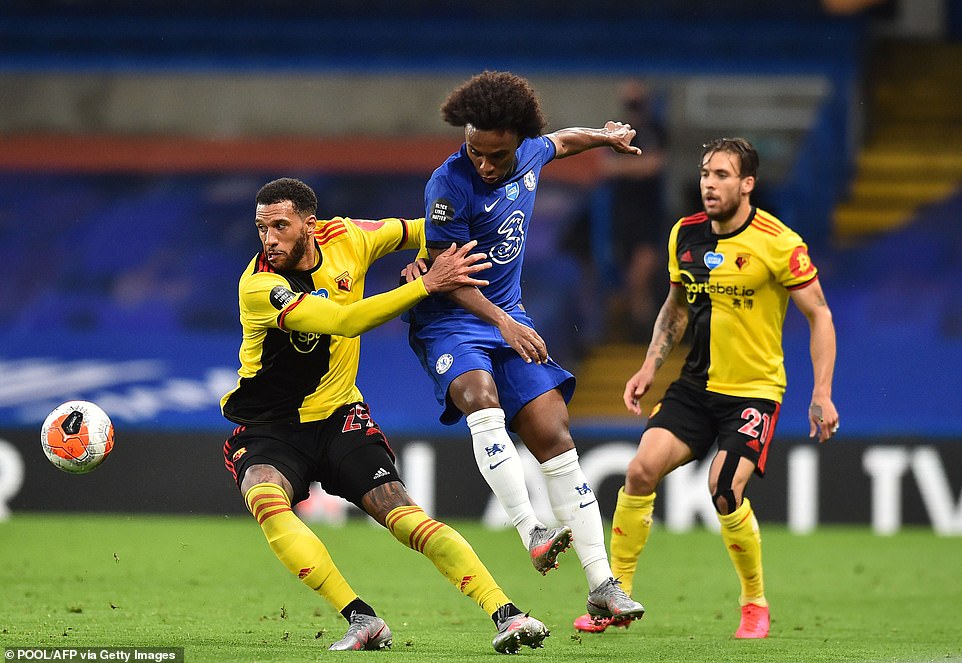 Willian was the architect of much of Chelsea’s chances as ever, but he is becoming less relied upon as others step up 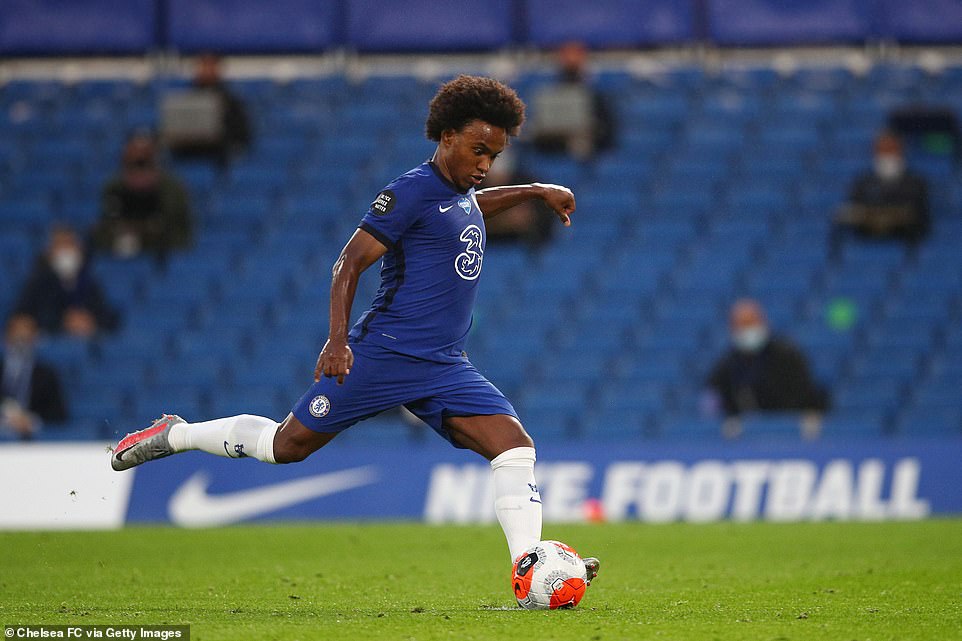 Yet when the breakthrough came on 27 minutes, it showed Chelsea at their best. N’Golo Kanté recovered the ball and then Mason Mount picked it up, driving towards the box to release Ross Barkley. With a spin and touch that bamboozled his opponents, he touched it forwards to Olivier Giroud.

The Frenchman let the ball run, waited for Craig Dawson’s challenge and then struck back across the defender and beyond Ben Foster to squeeze the ball in at the far post.

Barkley, starting his third Premier League game in a row for the first time since his move from Everton, is having a good post lockdown mini season. As is Christian Pulisic, responsible for creating the second on 44 minutes, driving into the Watford box and heading for the byline.

He engendered enough panic for Etienne Capoué to charge at him and knock him to the ground, unnecessarily as he had team-mates covering. But Pulisic’s runs of late induce this kind of fearful from reaction for opponents. He is growing into his place in this Chelsea team.

Willian stepped up to take the penalty, confidently driving it to the right of Ben Foster for 2-0 and leaving Watford somewhat lost in terms of strategy come half time, as there now seemed little prospect of points from this game. 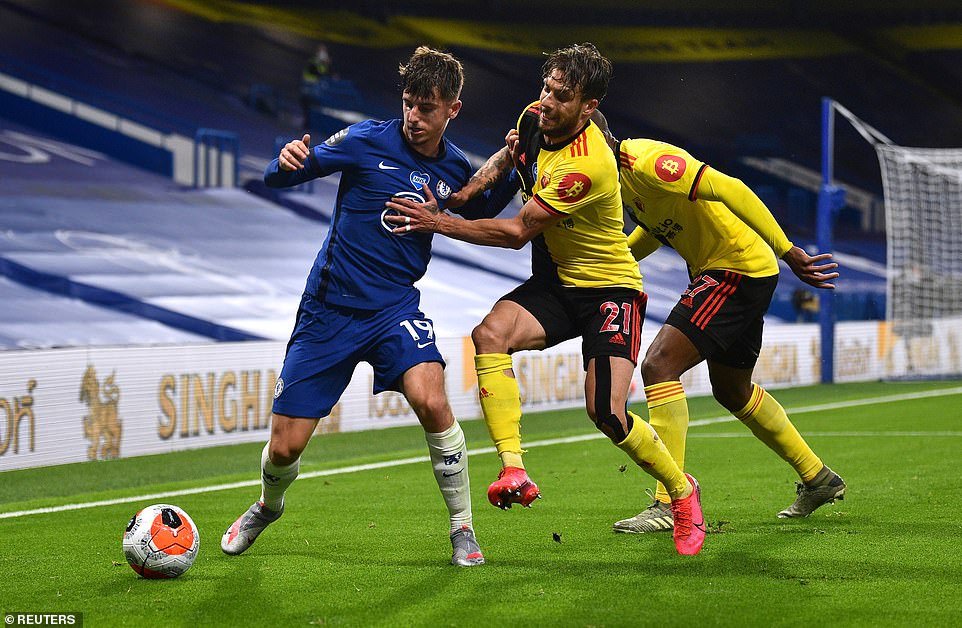 Mason Mount put in a superb display in midfield, with his superb pass to Ross Barkley crucial in the build up to Giroud’s goal

Other than a Nathaniel Chalobah free kick, driven high into The Shed End, on 24 minutes and a few hopeful corners, they created little and understandably focused their effort on getting ten men – and sometimes eleven, with Troy Deeney tracking back – behind the ball.

That’s allowable even at 1-0 down but once the deficit has doubled, it’s harder to justify the limited vision and certainly more difficult for players to motivate themselves to do the requisite running it requires.

‘What more do you want me to do?!’ Troy Deeney shouted at his team-mates after another fruitless run ended in nothing. Truly, his task in the second half was a lonely one. Even when Danny Welbeck came on to assist on 57 mintes, he was out wide and thus tracking back most of the time. Deeney was withdrawn, doubtless with the vital game at home to Norwich in mind, on 64 minutes. 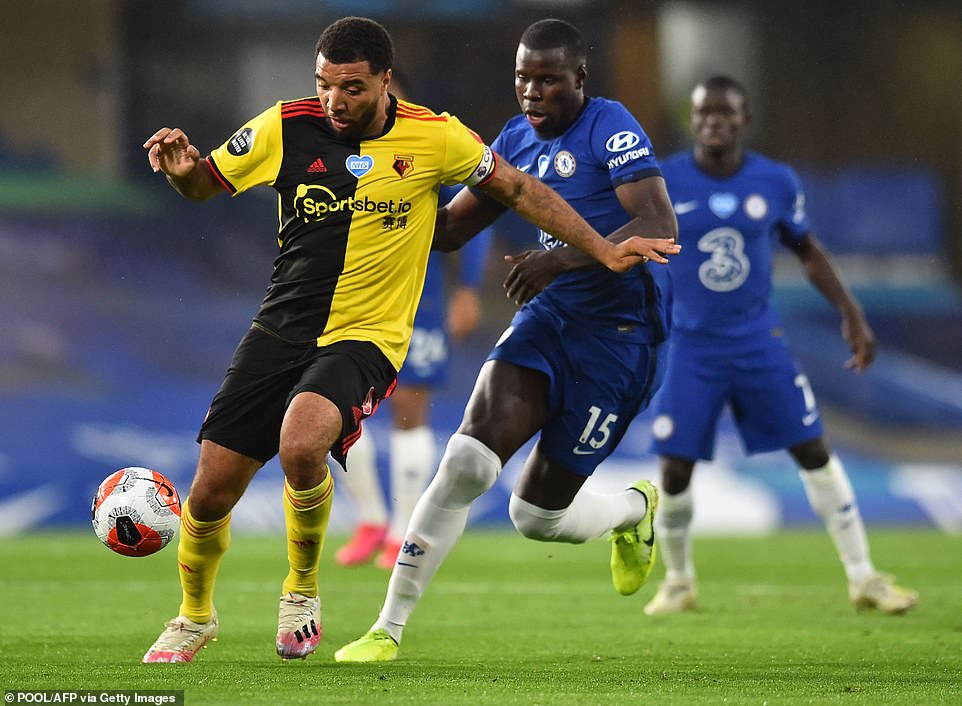 Troy Deeney found himself frustrated as Chelsea were rock-solid at the back, a turnaround after Wednesday’s performance

Chelsea remained encamped in the Watford half. Craig Dawson had to slide across the box to cut out a dangerous- looking Mason Mount cross on 55 minutes. An inspired Willian wriggled his way into the Watford box, touched the ball to Giroud, who struck from close range only to be denied by the out stretched Foster on 59 minutes. Willian cut inside to shoot from range on 68 minutes, required Foster to scramble save. From the corner Kurt Zouma’s firm header was collected by Foster.

Watford did venture forward occasionally. But there was precious little threat. A Hughes free kick met by Dawson’s head which just cleared Kepa’s crossbar on 75 minutes was the first moment where there was any need for Chelsea to worry. And Danny Welbeck made Kepa stretch with a shot across goal in 81 minutes, their best chance.

In general, it was hard to avoid the feeling that the match had been settled in in a 19-minute period in the first half and the rest was merely an exercise in ticking over, as both teams eyed up more significant fixtures upcoming.

There was an enjoyable look at what Chelsea are becoming in the final fifteen minutes, when Callum Hudson-Odoi making his first minutes since lockdown came on with Ruben Loftus Cheek and Tammy Abraham, with Billy Gilmour following shortly after, as N’Golo Kante limped off with a troublesome looking hamstring issue.

That meant Chelsea had six acaedamy graduates on the pitch, which is becoming the norm for them now but a far cry from the club the used to be.

Schmeichel 'cannot understand' why Man Utd sold 'quality' Premier League star
Bayern Munich complete German double with record-breaking Cup triumph
Best News
Recent Posts
This website uses cookies to improve your user experience and to provide you with advertisements that are relevant to your interests. By continuing to browse the site you are agreeing to our use of cookies.Ok