Chelsea left-back Emerson Palmieri is eager to return to Serie A in an effort to boost his chances of making Italy’s Euro 2021 squad. Inter Milan and Juventus are interested in the 27-year-old, who does not figure in Frank Lampard’s long-term plans at Stamford Bridge.

Chelsea have a new left-back is on their transfer agenda ahead of the summer window, with Lampard also willing to dump Marcos Alonso.

The Blues boss has indicated that neither Palmeiri or Alonso have a future at the club by picking Cesar Azpilicueta in their role for the last two Premier League fixtures.

Leicester City’s Ben Chilwell is the club’s top target to fill the problem position on a long-term basis.

The Foxes are likely to demand a transfer fee similar to the £80million sum that took Harry Maguire to Manchester United last summer. 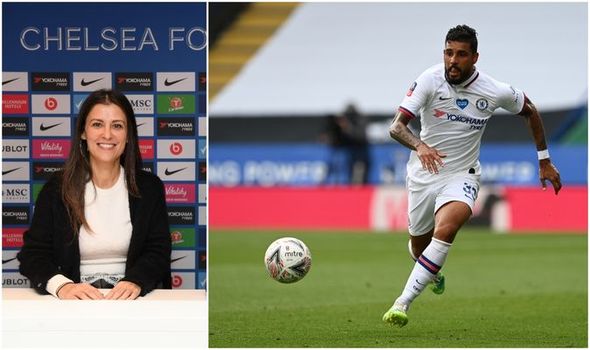 Despite Roman Abramovich showing his intent by already getting his chequebook out to sign Hakim Ziyech and Timo Werner, Chelsea will look to raise funds for further signings.

A decent sum for Palmieri would go some way to helping finance a swoop for Chilwell.

“Emerson Palmieri has handed in a transfer request to Chelsea,” Schira wrote on Twitter.

“The left-fullback wants to return to Italy to keep his spot in the Azzurri EURO2021 squad.

Chelsea forked out an initial €20m (£18m) to bring Palmieri to Stamford Bridge in the summer of 2018 but he has struggled to nail down a regular role in the team.

He has been limited to 53 appearances across all competitions in two-and-a-half seasons but did play a role in last season’s Europa League final triumph over Arsenal.

Chelsea are also looking to sign Kai Havertz from Bayer Leverkusen so a number of other players are likely to be sold.

The likes of Alonso, Michy Batshuayi, Tiemoue Bakayoko and Danny Drinkwater will be moved on.

Pedro has already agreed a free transfer to Roma when his contract expires at there end of the season.

What Erling Haaland said about Liverpool during first Anfield visit

Messi refused to shake referee's hand after win vs Napoli

Man Utd boss Solskjaer could have the next Lionel Messi in his squad already – Berbatov
Arsenal table contract offer to free agent defender but face RB Leipzig competition
Best News
Recent Posts
This website uses cookies to improve your user experience and to provide you with advertisements that are relevant to your interests. By continuing to browse the site you are agreeing to our use of cookies.Ok