Chelsea will need to replace Jorginho if the Italian leaves the club in the next transfer window, according to former Blues midfielder Craig Burley. Jorginho has struggled for game time since the Premier League resumed in June, playing just 10 minutes in his only appearance against Crystal Palace last Tuesday.

Chelsea boss Frank Lampard has chosen to put faith in the likes of N’Golo Kante, Mateo Kovacic and Ross Barkley ahead of the Italy international.

Jorginho has been linked with a move back to Serie A but despite not featuring much of late, Burley still believes the 28-year-old should be replaced.

“Billy Gilmour’s come in but he’s a young man learning the game and that’s a lot to ask, but he’ll get some game time. 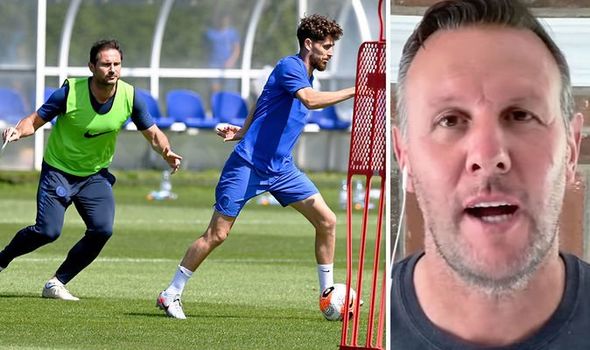 “Kovacic is there, Barkley’s had game time, [Ruben] Loftus-Cheek is back although he’s more attacking.

“But I suppose the answer would be to have protection, if Frank Lampard sees it that way, if there’s an injury to N’Golo Kante, they’re kind of going to be stuffed for somebody who can play a deeper-lying midfield role and protect that back four.

“So I would say if he leaves the answer would be yes.”

However, Burley’s ESPN colleague and former West Ham goalkeeper Shaka Hislop does not think Jorginho needs to be replaced.

“I’m not sure that they necessarily need to add to who they have coming in.

“I’m going to go for no. I’ve never been a Jorginho fan.”

Earlier this week Lampard insisted he was happy with Jorginho and the competition he has in midfield.

“And then in slightly more advanced areas I have Mason Mount, Ross Barkley and I have Ruben Loftus-Cheek now.

“There are always players who are maybe unhappy or have moments out of the team and that’s Jorginho at the moment.

“If a player is missing for one game or a few games, it doesn’t mean in any way that they are out of my thoughts going forward.

“There have been times when he has been pivotal for me this year, certainly on and off the pitch. That doesn’t change and I am very happy with him.”

Mbappe could make surprise return from injury in Champions League

HOT OR NOT: Normal service resumed as Anderson shows his brilliance

Brendan Rodgers: Champions League bid can’t distract Leicester City
Arsenal outcast Mesut Ozil makes transfer decision on where he will go next
Best News
Recent Posts
This website uses cookies to improve your user experience and to provide you with advertisements that are relevant to your interests. By continuing to browse the site you are agreeing to our use of cookies.Ok