Blues manager Frank Lampard is desperate to secure the signature of one of Germany’s most promising talents to join new recruits Timo Werner and Hakim Ziyech in west London.

Goal claim Chelsea haven’t submitted a formal offer for the 21-year-old, who has scored 45 goals and provided 31 assists in 148 appearances for Leverkusen.

The German outfit are looking for £90million for their sought-after youngster, although reports suggest a deal could be done for around £70m.

And Rudiger, who’s played alongside Havertz for Germany, has praised his compatriot.

“Has he been linked with us?” Rudiger told Goal when asked about Havertz.

“He is a great talent and he had a very good season. He is also very young and we will see what happens.”

JUST IN: Man Utd in transfer ‘poker game’ for winger that could save Ed Woodward £55m 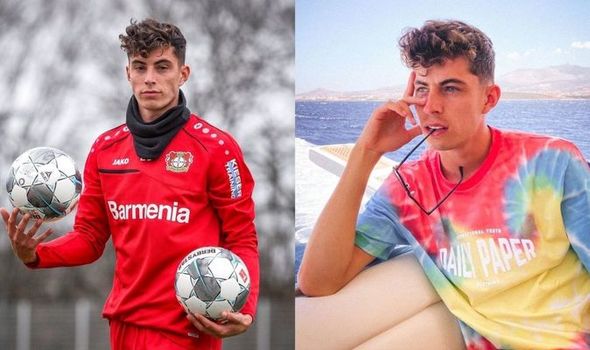 Rudiger continued to discuss his involvement in the arrival of compatriot Timo Werner, who signed for £47.5million.

The centre-back earned the nickname #AgentRudiger on Twitter for helping to bring the RB Leipzig forward to Stamford Bridge.

“My friends told me about it (the #AgentRudiger nickname] but I just tried to help out because everyone knows and can read about how we played together.

“There’s a bond, so I just did what I had to do. We spoke a lot during the lockdown and I have known him for a long time through playing in the national team and at Stuttgart together.

“It’s nice to see how his career has gone and how he developed every year, getting better and scoring more goals and getting more assists.

“I am very happy for him that he has now managed to take that step like me to leave Germany and come to the UK.

A long season coming to a break – A season to work, grow & learn. Thank you all in the stadiums and at home for the support. For now, I gotta take a breath. Hope you’re well, stay healthy, Kai

“I think it is a good sign if you can get people like him in the club because he is also still young but he showed that he can score goals and I hope that he can do the same here that he did in Germany.

“At the beginning, it was not easy for him because he was only 17 when he came into the squad and he was a little kid, very thin, but now, over time, I think he went to the gym because he is bigger!

“Each year you see how good his statistics are. Every year he scored more than the last and his qualities are in scoring goals.

“I hope he can do that for us but the most important thing is that he stays healthy and he adapts to many different things.

“I was one of the people who helped convince him to come here so it is also my job to help him [settle].

“Of course, we speak the same language but he does speak very good English too. The thing is, with this job, and as a team, we all have to help him. We will do that for him.”

McCoist calls on Everton to make vast improvements next season

Ronaldo and Dybala model new Juventus home kit for 2020-21 season
Pulisic declares himself 100% fit for FA Cup final
Best News
Recent Posts
This website uses cookies to improve your user experience and to provide you with advertisements that are relevant to your interests. By continuing to browse the site you are agreeing to our use of cookies.Ok