Chelsea would be adding strength to their “weak” midfield by signing West Ham star Declan Rice, according to former Arsenal winger Perry Groves. Rice has been linked with a move back to the club he left as a 14-year-old. But West Ham have reportedly slapped a £70million price tag on the England international.

Chelsea have already spent around £80m this summer on Hakim Ziyech and Timo Werner, and are heavily linked with a move for Bayer Leverkusen forward Kai Havertz.

But Blues boss Frank Lampard hinted following Saturday’s Champions League exit to Bayern Munich that he would continue to be active in the transfer market.

And Groves believes Rice would be a top addition to help protect Lampard’s leaky defence.

“I think he does suit Chelsea because we said before, they look weak through the centre of their midfield area,” Groves said on talkSPORT. 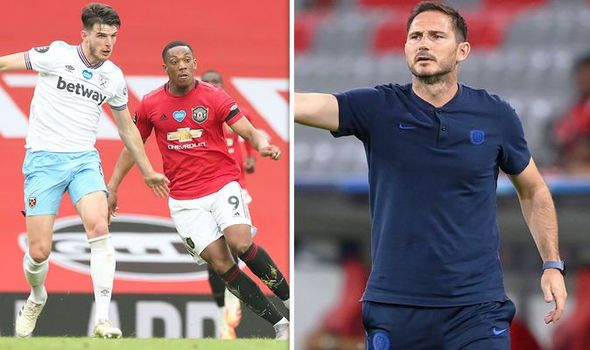 “It gives them that little bit of physical strength and he’s got better on the ball.

“He would be a player who would protect the two centre-halves. So that makes sense.

“The price is going to be more because obviously he’s English so that always puts the price up by another £10m doesn’t it.”

Chelsea finished the Premier League season fourth in the table, qualifying for next season’s Champions League.

They also reached the FA Cup final where they were beaten by Arsenal before the last-16 Champions League loss to Bayern.

Lampard’s side exceeded expectations in his first season in charge but did concede more goals in the league than any other team in the top half.

And the former England midfielder claimed Saturday’s defeat opened his eyes to the improvements he needs to make in the market.

“We’ll look at that [recruitment], because that’s our job, we’re very joined up on that already,” Lampard said.

“From having a transfer ban [last summer] you feel we’ve missed where other clubs have spent and improved, and recruitment is a huge part of this game.

“Nights like this in a footballing sense, show me a lot, tell me a lot.

“So it’s a conversation now, the season is ended, it’s a very quick turnaround, so now is the time to see where we can improve, what areas we can improve on.”

Sevilla are a Europa League force to be reckoned with
Arsenal will ‘listen to offers’ for first-team star as three clubs prepare transfer bids
Best News
Recent Posts
This website uses cookies to improve your user experience and to provide you with advertisements that are relevant to your interests. By continuing to browse the site you are agreeing to our use of cookies.Ok