Chelsea: Why Frank Lampard is stuck with struggling Kepa Arrizabalaga whether he likes it or not

As Kepa Arrizabalaga currently struggles to catch a ball, Frank Lampard finds himself caught in a bind.

It’s by now well known the Chelsea manager would sell the Basque goalkeeper given the chance, but that is currently highly unlikely. Chelsea paid a world-record fee for a goalkeeper as recently as 2019, and it is the club’s general policy to recoup such value in any sale. While some Spanish sides are interested, one involved source says it’s currently “impossible” he moves permanently.

“Nobody will pay the amount that Chelsea did.”

It’s all the more difficult in such an uncertain, Covid-conditioned market. That means Lampard will have to persist with the 25-year-old, which means the key question is how long Kepa’s problems will persist.

He just hasn’t inspired confidence of late with his feet, his hands, or – really – his whole body. West Ham United’s first on Wednesday displayed the last of those flaws, as Kepa initially went for Jarrod Bowen’s corner, hesitated and got caught under bodies and then just watched Tomas Soucek’s header fly in. This wasn’t exactly vintage Peter Schmeichel.

It should be recognised that there was some internal debate at Chelsea about signing Kepa back in 2018. The initial target was Alisson Becker, who decided on Liverpool. Some of Kepa’s stats compared unfavourably to the Brazilian – not to mention a series of other goalkeepers, like Thibaut Courtois – and that has continued into this campaign.

His save percentage has recently been the lowest in the Premier League. Such stats are still dependent on certain interpretations and qualifiers, and Kepa’s many qualities shouldn’t be overlooked.

For all that he feels one of those lampooned goalkeepers right now, there are many experts who believe he has serious ability. Dave Henderson, a goalkeeping scout and former professional, is one.

“He has fantastic reflexes, is brave, and has excellent agility,” Henderson says. “He’s as good as any goalkeeper in the world in those departments. He’s way behind Ederson in distribution, though, and way behind Courtois in box domination, to be the complete goalkeeper.”

The latter is what feels the most problematic for Chelsea right now, given how fragile the defensive part of the team is. Kepa isn’t currently offering that necessary composure that offers reassurance.

It is something that has actually become all the more conspicuous in the current circumstances, with empty stadiums. Kepa is usually one of the loudest on the pitch, and the most persistent. His shouts of “close the gap!” or “lines!” soundtrack the games. They are always barked. 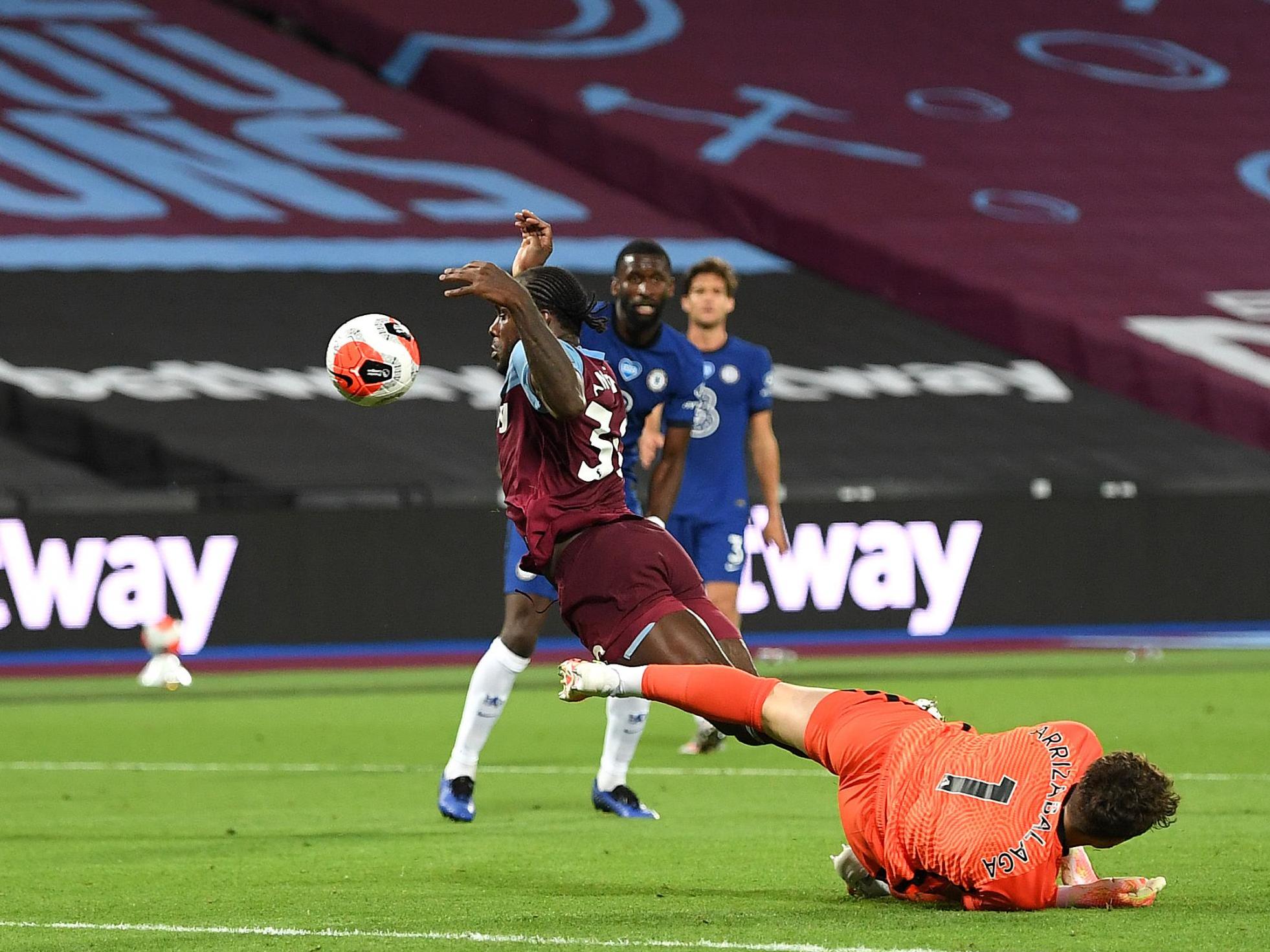 Some Chelsea players actually referenced this last year, and felt the fact Kepa was always shouting and screaming actually betrayed a certain immaturity. The feeling was he was never sure his defenders would do the right thing.

That can be the subtle and significant change when you go from a mid-table club, like Athletic Bilbao, to one with the pressures of Chelsea. It can bring that out.

Kepa can admittedly seem bolshy, as was the case with the controversial incident with Maurizio Sarri in last season’s League Cup final. He was very sure of himself when speaking to The Independent in the immediate aftermath of that incident, backing his own stance, before issuing an apology the next day.

That controversy still hangs over his situation. It would be fascinating to know what Lampard really thinks of it.

It’s impossible not to think it feeds into the current uncertainty over his future. There is similarly a lingering uncertainty to Kepa’s game. His confidence does seem affected, which may be why he isn’t making some saves he should.

Others who know the player say there are other factors. They say he’s “not himself”, and point to how he hasn’t fully settled in England, after the break-up of a long-term girlfriend from his teenage years.

It could be one of those situations where he just needs a change of scene, in the same way as compatriots Fernando Torres and Alvaro Morata did. A potential option for Chelsea would be a loan, in a way that allows Kepa to boost his value again.

It’s just that the market is uncertain there, too, and his replacement would be Willy Caballaro. Kepa is still better than the Argentine even in this form, and there aren’t too many options right now.

It’s why Lampard may be in this bind for some time. Kepa needs to get back to his true form soon.

Man Utd chief Ed Woodward taking Jadon Sancho transfer gamble because of three players
Carlton Cole hits back after former Chelsea striker criticised for West Ham win reaction
Best News
Recent Posts
This website uses cookies to improve your user experience and to provide you with advertisements that are relevant to your interests. By continuing to browse the site you are agreeing to our use of cookies.Ok