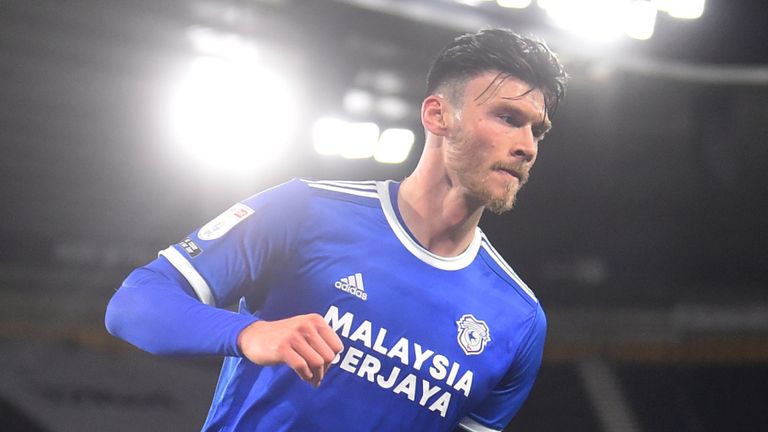 Moore and Junior Hoilett hit the woodwork for the visitors and Waghorn was denied a second near the end but Derby at least halted a run of five home league defeats.

Derby had failed to score at home in the Championship this season but they went close in the ninth minute when Tom Lawrence found space on the right edge of the box and fizzed a shot just wide.

Lawrence was involved again when his run across the face of the area was halted by Joe Ralls and from the resulting free kick, Derby finally ended that drought in the 24th minute.

Waghorn had scored a superb free kick at Nottingham Forest on Friday night and he struck again with a left foot curler over the wall that left Alex Smithies helpless.

He was close to a second when Lee Buchanan cut the ball back but Waghorn’s shot was blocked by Curtis Nelson and he saw another goalbound effort charged down as Derby pressed.

Cardiff had hardly figured as an attacking force but they came close in the 39th minute when Will Vaulks whipped in a cross from the right and Moore headed against a post from six yards.

It signalled a good spell for Cardiff but Derby ended the half on the front foot with Nelson cutting out a cross before Waghorn could pounce.

Derby started the second half strongly with Nathan Byrne’s low cross put behind for a corner but Cardiff hit the woodwork again in the 51st minute.

Sheyi Ojo swung over a deep cross and Junior Hoilett’s header beat Kelle Roos but came back off a post.

Derby responded by breaking upfield from a Cardiff corner but Kamil Jozwiak’s cross was just too strong for Lawrence.

Cardiff’s delivery and final pass was letting them down but when Derby switched off at a free kick, Robert Glatzel just failed to connect with Ojo’s cross.

Ojo delivered again in the 77th minute when his pass sliced open Derby’s defence and Moore fired low past Roos to level with Cardiff’s first effort on target.

Derby almost regained the lead in the 88th minute when Colin Kazim-Richards’ flick set up Waghorn but his low drive was smothered by Smithies.

Neville predicts where Man Utd, Chelsea and Liverpool will finish this season

Birmingham 2-1 Huddersfield: Lukas Jutkiewicz nets late Blues winner against Terriers
Barcelona mock Ronaldo after Juventus victory with Lionel Messi ‘GOAT’ tweet
Best News
Recent Posts
This website uses cookies to improve your user experience and to provide you with advertisements that are relevant to your interests. By continuing to browse the site you are agreeing to our use of cookies.Ok