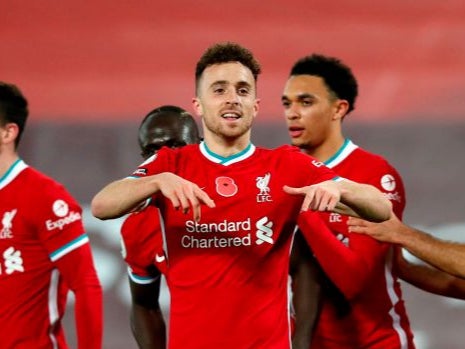 Jarrod Bowen was afforded time and space in the centre circle to feed Aaron Cresswell on the left, who then supplied Arthur Masuaku.

Curtis Jones continued the trend of not putting pressure on the ball from Liverpool by failing to stop the cross.

Joe Gomez’s attempt to clear the delivery was weak and only reached as far as Pablo Fornals, who controlled and beat Alisson inside his near post.

The lead allowed West Ham, without injured talisman Michail Antonio, to get comfortable in their obstructive organisation as Liverpool did not do anything to disrupt them.

Jurgen Klopp’s side were not creating much of note, so were thankful to Masuaku for clipping Salah’s Achilles from behind without making any contact with the ball in the box.

The Egyptian struck his penalty straight down the middle and retrieving the ball was the only real energy West Ham goalkeeper Lukasz Fabianski expended in the first half.

The second 45 meandered on until Shaqiri and Jota were introduced for Jones and Roberto Firmino, making Liverpool more direct. 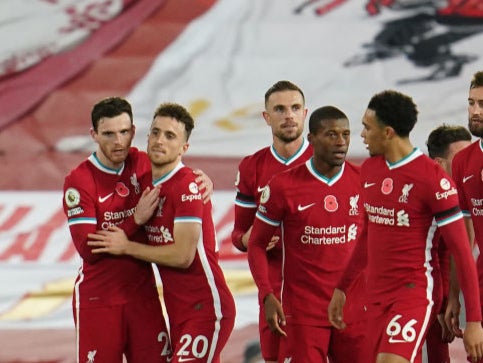 Robertson celebrates with Jota after his winning goal

The Portugal international was immediately in the spotlight as Klopp’s side contended with another VAR decision they will not be best pleased with.

Sadio Mane had a shot parried by Fabianski and slid in for the loose ball, which broke for Liverpool’s new signing to convert.

A lengthy check took place and the Senegalese’s boot had clipped the keeper. The referee, Kevin Friend, consulted his monitor and disallowed the goal.

But that wasn’t enough to thwart Jota from becoming the first Liverpool player to score in each of their opening three home games in the competition since Luis Garcia in October 2004.

Shaqiri delivered an intelligent ball, through a sea of defenders trying to get a block in, down the inside left channel to free Jota.

He slammed it into the bottom left to keep his run intact and keep Liverpool top of the table.

“Seeing the determination and will of the boys to play football to deal with setbacks, is really exceptional,” Klopp said.

“Football is about finding the right way, and tonight they found it. I loved the second goal. Super play. Shaq incredible!

“Every set piece was a major threat for us and we dealt with that well. Subs should have an impact. It is not a surprise.

“We had to be patient but lively.”

It was also a good night for Nat Phillips, making his league debut for Liverpool and turning in an impressive display at the heart of defence with Virgil van Dijk, Joel Matip and Fabinho all injured.

“Three years ago he was on his way to America to study for college, and tonight he’s playing for Liverpool.”

Liverpool player ratings as subs combine to secure comeback win over West Ham
Nat Phillips was ‘looking forward’ to leaving Liverpool before starring on debut
Best News
Recent Posts
This website uses cookies to improve your user experience and to provide you with advertisements that are relevant to your interests. By continuing to browse the site you are agreeing to our use of cookies.Ok