As A-League clubs and the players' union continue their war of words over a reduced pay deal for next season, FFA chief James Johnson has delivered a stark warning to both sides; Sort yourselves out, settle on an agreement – or we will come in and and organise a deal for you, for the good of the game. 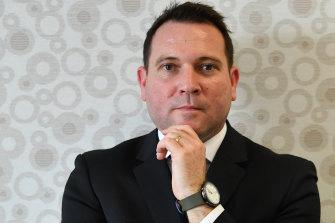 Sort it out: FFA boss James Johnson says the governing body will intervene if clubs and the players’ union don’t come to a wage agreement. Credit:Sam Mooy

Talks have dragged on for several weeks after a band-aid agreement was put in place to enable the A-League to resume and finish its season in a NSW hub, with the players taking significant pay cuts to do so.

Now the players are demanding that their wages are not slashed while the clubs are crying poor in an environment where COVID-19 has laid waste to the economics of all sport.

Under the yet-to-be-enacted plan for the A-League and the FFA to decouple – an agreement that was reached two years ago when Steven Lowy was forced out as chairman of the FFA – the club bosses have taken control of negotiations.

This round of collective bargaining agreement talks is the first major test of their partial sovereignty, but the coronavirus crisis and the various other issues the game is facing means that things are hardly going according to plan.

Johnson says he is hopeful that both parties can bury the hatchet and come up with a deal – but warns that the governing body, which has an overall responsibility to safeguard the wider and long term interests of the sport, will take action if it has to.

"Our role as the governing body – as it would be in Germany, France, China or Japan – becomes one of a government that oversees football at all levels and has a right to intervene if the employer and employee representatives cannot find an agreement," he said.

"There's no timetable but there is a level [when] tension increases [where] I think we would consider intervening.

"These are always sensitive negotiations. You don't want to take away or limit the autonomy from an employer or an employee group so we have to give them time . If it doesn't get solved next week, and it may not, then I don't think that's the end of it, it will continue, and at some point that's when we would come in."

Johnson acknowledges that these are not easy times for players and clubs.

"If you are a player you have been in a bubble for months now [and] because of COVID it's going to be a little bit unclear as to when we restart," he said.

"There isn't going to be league football for some time – December at the earliest, more than likely the start of the new year."

The long-sought "un-bundling" – whereby the clubs gained autonomy to control the A-League and its revenues, leaving the FFA as an overall guardian of the game – still has not occurred.

Talks are stuck on the model to be adapted, with the clubs believed to be pressing for complete independence from other aspects of the Australian game and the FFA not keen to surrender such autonomy, believing that the future growth of the sport will be better served by a unified model, which aligns the clubs much closer to the rest of the game and their local clubs and communities.

USMNT starlet Gio Reyna aiming for bigger Borussia Dortmund role in 2020-21
Aston Villa aiming to complete two signings including Arsenal ace Emiliano Martinez
Best News
Recent Posts
This website uses cookies to improve your user experience and to provide you with advertisements that are relevant to your interests. By continuing to browse the site you are agreeing to our use of cookies.Ok