Those at Manchester City couldn’t help noticing a frustration to Kevin De Bruyne.

It wasn’t about losing footballer of the year to Jordan Henderson, mind. While many at the club were irritated about that, De Bruyne himself wasn’t that bothered.

He knows his own value. The Belgian once told people at a corporate function he is “the most intelligent player in the world”.

Many, including manager Pep Guardiola, are going even further and talking about him maybe being the best in the world outright. Lionel Messi is fighting the tide at Barcelona, Cristiano Ronaldo is by now fighting the effects of physical wear at Juventus.

For all the debate about what might have been missing from De Bruyne’s Premier League season to win footballer of the year, though, there is one thing missing from his career. It is what really does separate the game’s elite.

That is a dominant campaign in the Champions League, and defining performances.

This is what has frustrated him, all the more so since City failed to win the league this season. It was a frustration that was especially seen after last season’s elimination to Tottenham Hotspur. Putting such exasperation to good effect may well be the difference between City winning the competition and not, or even just getting past the last eight.

It is remarkable that, at 29, De Bruyne has only played in one semi-final. That was a fairly ineffective display in 2015-16 under Manuel Pellegrini, against – of course – Real Madrid.

The Spanish champions now block City’s path, and there’s never been a better time for De Bruyne to produce.

He personally feels in the form of his life. He was already the game-changer in the 2-1 first-leg victory. He now just needs to take charge of the whole competition. It is what players of his talent do. It is what the world’s best do. It is what the game demands. That is the way the modern game is built.

Since the Champions League expanded in 1999-2000 to include the top four from the major leagues, it is virtually impossible for any major talent to not be regularly involved. The self-perpetuating finances of the competition only fortify this, intensifying its gravitational pull.

We’re in a different world to the days when Diego Maradona only played in two seasons of the European Cup, or Roberto Baggio barely featured. If you go through the podiums of the Ballon D’Or over the last two decades – as a rudimentary guide for recognition in the game – virtually all of those who have made the top three have had some lasting impact in the Champions League latter stages.

The reality is that they now play in the competition so much, and have so much quality, that it’s virtually inevitable they show it. 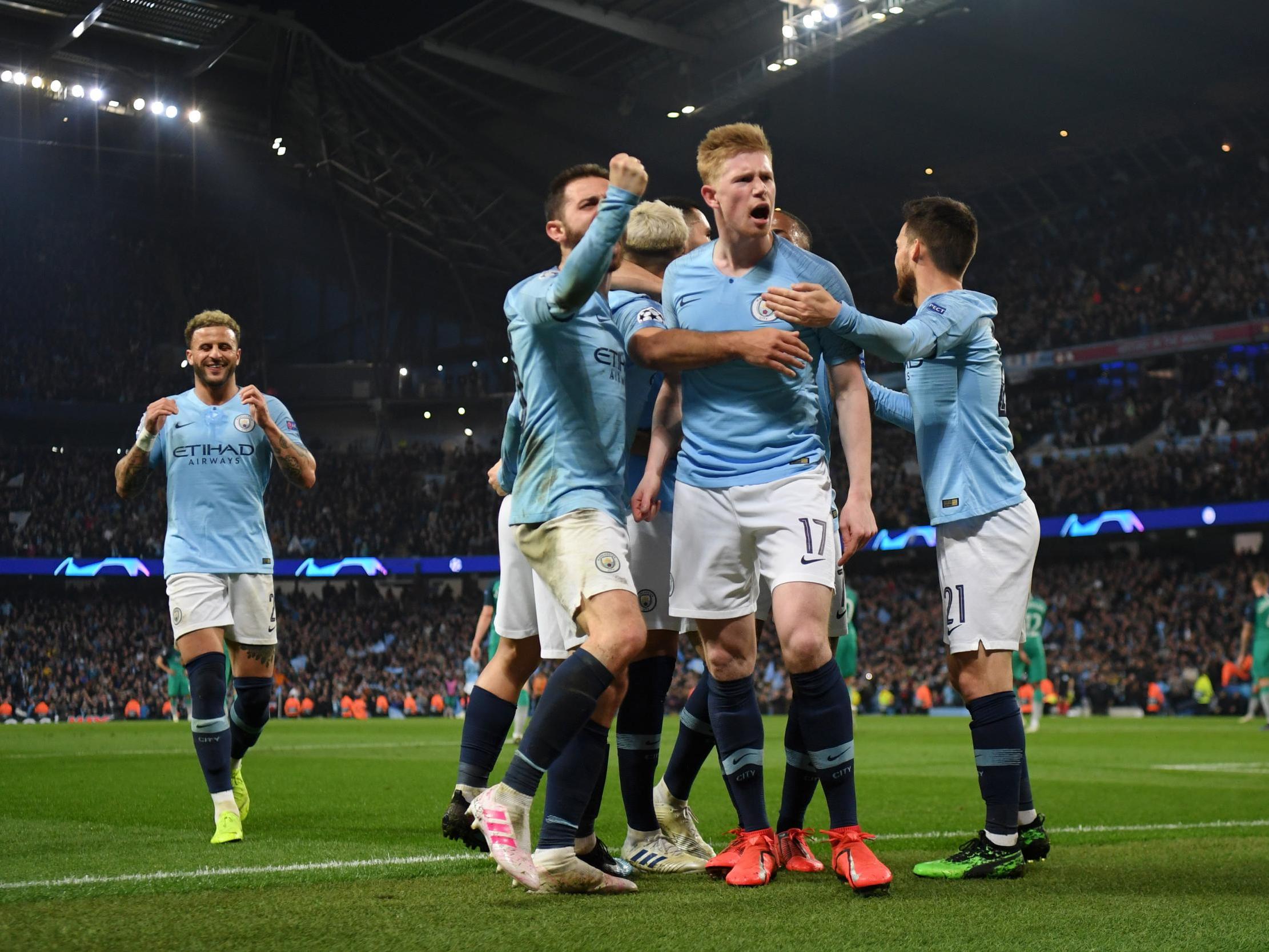 The only exceptions on that podium over that time are really Michael Owen in 2001 and Fabio Cannavaro in 2006, and both of those were before the super-club era really took form, so had their best performances in other competitions.

If you want to look at that super-club era, and extend it to the Ballon D’Or top 10 or those widely considered “stars” of the game over the last decade, we’re only really talking about Eden Hazard, Zlatan Ibrahimovic, Robin van Persie and… pretty much all of Manchester City’s prime players. They are the only exceptions, who didn’t quite excel in the latter stages of the Champions League.

It does stand out.

Some of this is obviously circumstantial. There’s the pot luck of a knock-out competition like the Champions League, and also City’s own struggles in it. Some of De Bruyne’s own displays point to both.

The Belgian was influential in his first quarter-final with City, scoring in both legs in the victory over Paris Saint-Germain in 2015-16, only for Madrid to exploit the stagnation of the Pellegrini era in that semi-final tie.

His best display in the competition until this season was last year’s quarter-final second leg against Spurs, where he produced a hat-trick of assists. They displayed his range of talents in different ways.

The first was a measured midfield pass for Raheem Sterling. The second, also for the forward, was one of those drilled balls that has so much quality contained within the delivery that it’s hard to know whether to describe it as a cross, a through pass or something else altogether. The third was then a combination of the drive and delicacy that so rounds him as a player. De Bruyne weaved his way through the Spurs defence from deep, before deftly releasing Sergio Aguero to smash the ball into the roof of the net.

It might well have been the tie’s crowning moment, but that game was instead capped by two VAR calls. Mere millimetres had massive effect.

Such are the wild, almost uncontrollable swings of modern knock-out football. This is why success can sometimes just be beyond players, regardless of what they do.

A counter-argument to all that, however, is that the very greatest players impose their will regardless. The romanticised view is that the elite elevate themselves even above the intangibles of the game. It is why Messi and Ronaldo are so held up.

The reality is more complex, and even both of those totems have been victims of events well outside their control in the competition. Look at Messi in 2010 or 2012, Ronaldo in 2012 or 2019. 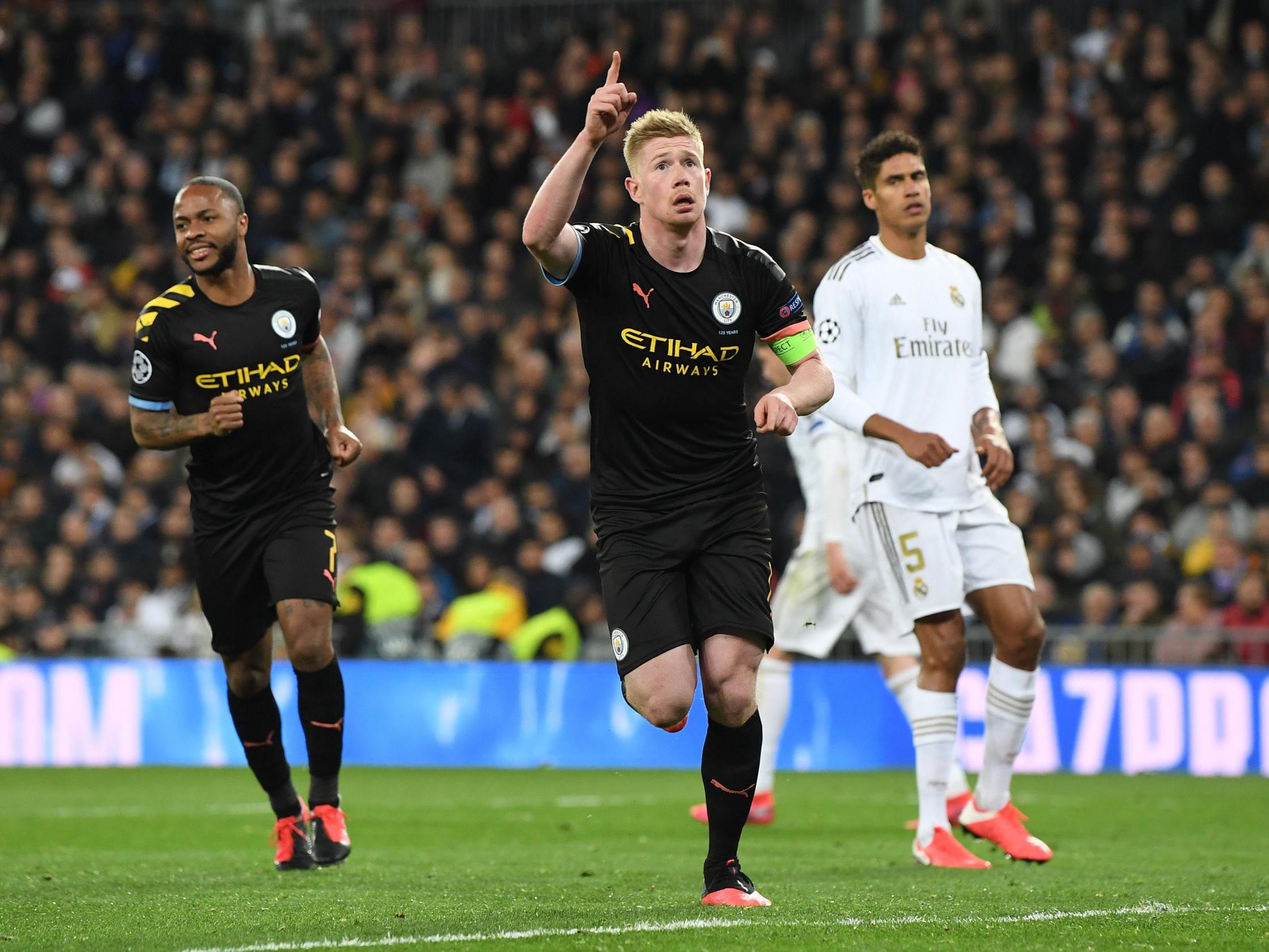 The true value is in persevering despite that. That’s where greatness really resides. That is an attitude De Bruyne now typifies. He wants to take command. He wants to drive teammates to a greater level.

One problem that City have arguably had in the Champions League is that they are “a squad of nice guys”. It was something Ibrahimovic himself once referred to, disparagingly describing that great Barcelona squad as “like schoolboys”.

The number of trophies they won significantly undercuts the Swede’s complaint, but there is some merit in his point when it comes to one-off games.

It is arguable that Guardiola’s system requires obedient personalities to fully work, and this will generally be spectacularly successful over the course of a full season, but that a lack of old-fashioned “bastards” – to put it as Brian Clough once did – might cost them amid the intensity of do-or-die knock-out games.

Those occasions are when you need a bit more than gifted players who can dutifully execute a system, since these are matches that go much deeper; that warrant greater levels of emotional reserve.

This might be why City need more from De Bruyne in that regard.

Everyone who knows him says he is developing that personality. They talk of how he now admonishes teammates for missing chances, especially so when he was chasing Thierry Henry’s Premier League assist record.

They add he’s “hard on them – but in a fair way”. He’s now super focused. He knows the stakes, the kind of status he and the club need to be at.

De Bruyne is aiming for much more than individual trophies. He knows it’s time to deliver in the grandest stages of greatest club competition.

Inter Milan finally unveil Manchester United flop Alexis Sanchez
Serie A side Roma to be bought by US billionaire
Best News
Recent Posts
This website uses cookies to improve your user experience and to provide you with advertisements that are relevant to your interests. By continuing to browse the site you are agreeing to our use of cookies.Ok