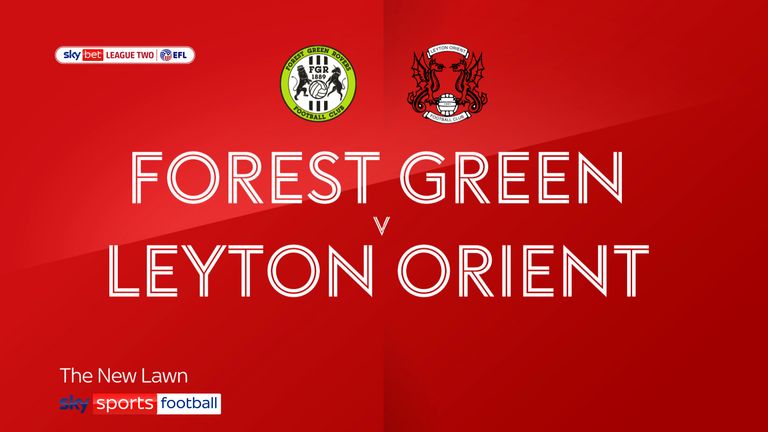 On-loan Birmingham midfielder Odin Bailey provided a goal and an assist to inspire Forest Green to a narrow 2-1 Sky Bet League Two victory over Leyton Orient as they moved up to third.

Bailey opened the scoring in the first half before Josh Wright equalised just before the break.

Forest Green substitute Matty Stevens won it for Mark Cooper’s side as he turned in Bailey’s corner with eight minutes to go.

Rovers dominated the opening exchanges with Aaron Collins fizzing over on two occasions.

Orient sparkled into life when a buccaneering James Brophy run was eventually snuffed out as Ebou Adams atoned his error to clear the ball out of the box as Conor Wilkinson shaped to shoot.

Rovers broke the deadlock on the half-hour mark as Jordan Moore-Taylor nodded the ball inside the 18-yard box for Bailey to plant a rasping drive beyond Vigouroux.

The away side levelled matters four minutes before the break as Udoka Godwin-Malife squandered possession for Brophy to step on the gas to pick out Wright, who finished with aplomb.

Stevens hit the crossbar for Forest Green after the break and Jake Young brought a gloved response from Vigouroux before Stevens clinched maximum points after 82 minutes.

Northampton 0-0 MK Dons: Goalless at the PTS Academy Stadium
Cardiff City 3-0 Barnsley: Bluebirds seal comfortable Championship win
Best News
Recent Posts
This website uses cookies to improve your user experience and to provide you with advertisements that are relevant to your interests. By continuing to browse the site you are agreeing to our use of cookies.Ok