Frank Lampard insists Chelsea’s 4-1 victory over Sheffield United was their best performance of the season, but is keeping his feet firmly on the ground.

Hakim Ziyech starred, creating two goals as Chelsea fought back from a goal down to register a fourth straight victory, taking them to within a point of Liverpool at the top of the Premier League.

Lampard’s side have scored 14 in four games, and conceded just one in six, but the manager insists Chelsea need to prove their strength over longer than a month.

“That’s the best performance of the season in complete terms,” he said in his post-match press conference, having said on Sky Sports: “We’re third, and that might change by the end of the weekend but at the same time, given the start we had where players were injured and we were starting to put it together, the lack of pre-season, now we’re seeing some of the work.

“The season is long and it’s very early days so I’m keeping my feet on the ground. We have challenge after challenge coming up, the players now go away for two weeks before we face Newcastle. Every game will be challenging.

“The balance of the team was good today, but we must continue. I know how football is, and I know that it’s not just about individuals. It was always going to be hard work against Sheffield United but they came through it.”

Lampard has continually stressed that his side are a work in progress, but the front line in particular seem to be clicking in recent weeks.

Sheffield United boss Chris Wilder said Chelsea are one of the top three sides in the country alongside Manchester City and Liverpool, and though Lampard insists the signs are good, he’s tempering expectations.

“People expected our attacking players to click on day one of the season, but of course that doesn’t happen. It’s a work in progress, and the movement and the relationships on the pitch is something you have to work on.

“There are great signs, but we need to keep going.”

Can Chelsea challenge for the title?

“I think they’ve got the players to challenge. We can sit here and say they can challenge, but football is fickle. It can swing so quickly as you can have one good performance like they had today against a Sheffield United team who I feel shouldn’t be bottom. Their quality is much higher than they’re showing positionally.

“After they come back from the international break, they’ve got Newcastle and if they lose that there will again be criticism. So we have to be careful, but right now with the changes they’ve made and the defenders that have come in, I do feel like they can challenge for the title.”

“I definitely think they’ll get in the top four but I feel they’ll still be short [of challenging for the title] behind Man City and Liverpool. You look at the areas that they’re not so strong in and they’re hoping that Thiago Silva and Edouard Mendy are going to be the difference. But let’s see by early new year if they’re going to make such a difference against the bigger guys. 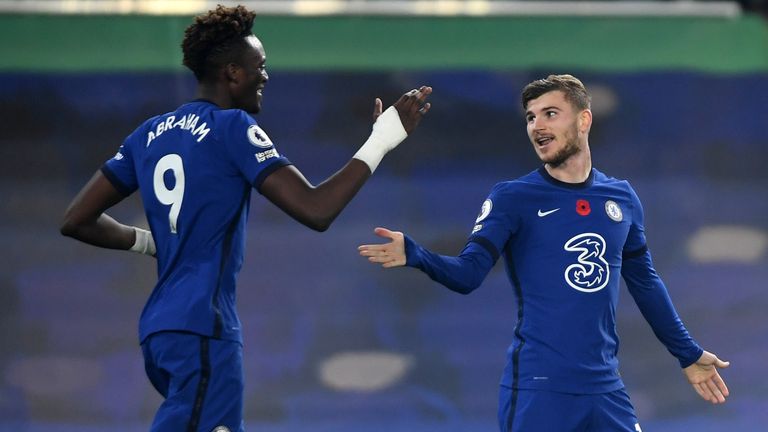 “Timo Werner’s first year in English football will prove very demanding and I just look at the strength that Liverpool and City have. Sergio Aguero is an enormous miss to City when he’s not playing, but the rest of the team is fabulous.

“Even with Liverpool losing Virgil van Dijk, and the bad run they’ve had of injuries to players who came in, I still think they’re a bit ahead of Chelsea right now.

“I’m thinking in a year’s time, Chelsea might be looking for another couple of centre-backs, and I still have that nagging doubt about the centre of defence. I’d like to reserve my judgment on this area of the pitch for Chelsea as the goalkeeper’s come in and only played a handful of games.”

Chelsea return to action after the international break with a trip to Newcastle United on Saturday November 21 at 12.30pm, while Sheffield United host West Ham on Sunday November 22, live on Sky Sports Premier League at 2pm.

Solskjaer explains Man Utd line-up as Pogba and Van de Beek miss out vs Everton
Everton boss Carlo Ancelotti makes confident Ole Gunnar Solskjaer Man Utd prediction
Best News
Recent Posts
This website uses cookies to improve your user experience and to provide you with advertisements that are relevant to your interests. By continuing to browse the site you are agreeing to our use of cookies.Ok