Liverpool need to sign Thiago Alcantara because he would add some much-needed freshness that would keep the Premier League champions on their toes, according to Gary Neville. The Reds won their first league title in 30 years following some masterful coaching by Jurgen Klopp as well as a star-studded roster.

However, the Merseysiders are now facing the difficult task of retaining their crown this coming season while their competition is getting stronger during the summer transfer window.

That is why Neville is adamant that Liverpool shouldn’t rest on their laurels and look to add even more quality within their squad despite their already impressive group of player.

The Manchester United legend insists that every club needs to shake things up when competing at the top level and a player like Thiago would help the Reds reach even greater heights.

JUST IN: Thomas Partey keen to join Arsenal but has one demand that could damage Gunners’ plans 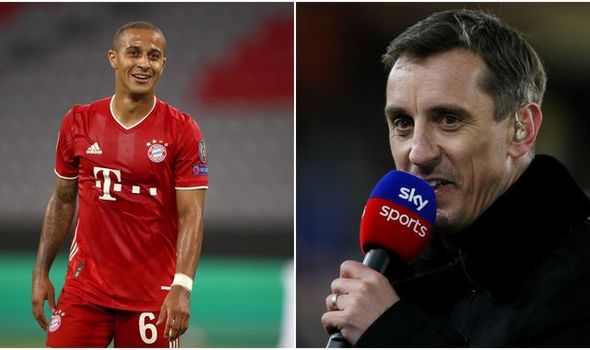 Neville told Sky Sports: “That demand of the same squad, the same players, the same messages, the same relationships, the same jokes for two or three years – just something slightly different in the dressing room, that addition, just sometimes can become a little bit draining.

“And I think the idea of Thiago coming for Liverpool is a big moment, because I think it deals with all those issues that can occur after two or three seasons.” 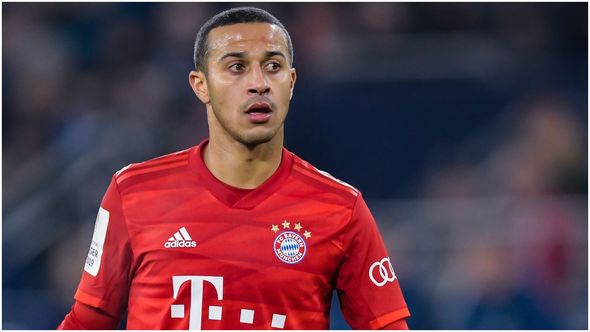 So far the Reds have only signed Kostas Tsimikas from Olympiacos as a back-up to Andy Robertson at left-back.

Carragher said: “Three or four years of the same team, sometimes it just needs a bit of freshness added to it, mentally as much as anything for the rest of the team.

“It’ll just be interesting to see whether they get a signing or two across the line.”

Meanwhile, Liverpool’s competition keeps getting stronger as the likes of Manchester City and Chelsea are looking to dethrone Klopp’s side this coming season.

The Blues have been the most active as they have already landed the likes of Timo Werner, Hakim Ziyech, Thiago Silva, Ben Chilwell as well as Malang Sarr and appear to be close to signing Kai Havertz from Bayer Leverkusen.

City have added Nathan Ake and Ferran Torres from Bournemouth and Valencia respectively and are even keeping tabs on Lionel Messi, who is set to leave Barcelona and is reportedly keen on reuniting with Pep Guardiola.

MICK MCCARTHY: Jack Charlton's management was based on honesty

'We all care for Pogba': Juve chief hints at move for struggling star

Newcastle concede five and Lascelles sent off in Middlesbrough thrashing
Conte is in last chance saloon at Inter and has to deliver silverware
Best News
Recent Posts
This website uses cookies to improve your user experience and to provide you with advertisements that are relevant to your interests. By continuing to browse the site you are agreeing to our use of cookies.Ok