Houssem Aouar confirmed that discussions are ongoing between Arsenal and Lyon over a potential transfer. The Frenchman was pushed for answers on his future after his side’s 1-1 draw with Lorient this evening in Ligue 1.

The Gunners saw an offer of £32million rejected for the Frenchman in midweek and are set to try again in the near future.

Lyon want around £54m to let their star man go but Arsenal are unlikely to be able to afford that.

Nonetheless, Aouar is believed to have already agreed to join Arsenal permitting that Juventus or Barcelona do not make their move.

Speaking to Canal+ this evening, Aouar claimed he would not discuss the matter out of respect for Lyon. 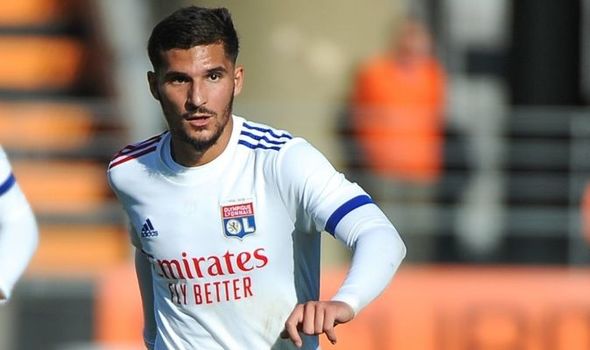 He said: “I will give you an interview after the match but I will not talk about my future”

Aouar was then pushed for an answer on whether he would be keen to join Arsenal.

The 22-year-old refused to rule out a move to the Emirates Stadium: “There are contact with clubs, I don’t know yet. We’ll see what happens in the future.”

Arsenal have made Aouar their top transfer target after losing hope that they can sign Thomas Partey from Atletico Madrid.

The Spanish club have told the Gunners they will have to pay his £45m to complete a deal.

Arsenal chief Edu is preparing a new bid for Aouar and is reportedly set to offer an additional £9m in add-ons for the player.

Arteta has had to raise funds to pursue the deal though and is keen to offload several players in order to bolster his transfer kitty.

Lucas Torreira has held talks with Atletico Madrid after Torino were priced out of a deal.

Sead Kolasinac and Sokratis Papastathopoulos could also be heading for the exit door before the transfer window closes on October 5.

Man Utd ‘rivalling Tottenham for Milik transfer’ as Red Devils make contact
Dan James holds Man Utd talks after Leeds launch loan transfer bid
Best News
Recent Posts
This website uses cookies to improve your user experience and to provide you with advertisements that are relevant to your interests. By continuing to browse the site you are agreeing to our use of cookies.Ok