Chelsea are reportedly closing in on the signing of Kai Havertz after securing Champions League qualification. The Blues had been expected to start negotiations with Bayer Leverkusen over a transfer fee next week, although it was thought that the attacker would stay in Germany to see out the club’s Europa League campaign regardless of the outcome of these talks.

However, Chelsea’s 2-0 win over Wolves has supposedly changed Leverkusen’s stance and the 21-year-old could now depart the BayArena in the near future.

SportBILD Head of Football Christian Falk reports that successfully securing a top-four finish in the Premier League has accelerated Chelsea’s deal for Havertz, with his current club no longer insisting on his Europa League participation.

Negotiations for the German international are therefore hotting up with the Blues desperate to get a transfer confirmed as soon as possible.

Writing on Twitter, Falk said: “After qualifying for Champions League: it can now go quickly with the deal of @ChelseaFC and @kaihavertz29. 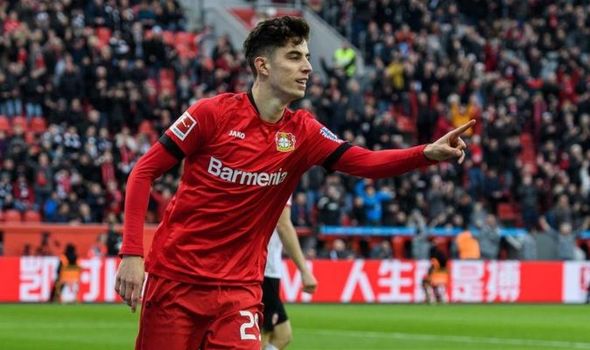 “Leverkusen does not insist on participating of @kaihavertz29 in the Euro League. Now the negotiations are getting hot.”

Chelsea have already agreed personal terms with Havertz so all that’s left to do is finalise a price with their Bundesliga counterparts.

It has previously been reported that Leverkusen value their star man at €100million (£91m) while Chelsea see €70m (£63.8m) as a more accurate assessment.

Earlier this week Sky Sports Germany claimed that the Blues could be prepared to boost their offer when the two sides meet at the negotiating table.

It was suggested Chelsea want to get the deal done as soon as possible so club director Marina Granovskaia could go as high as €80m (£72.9m) with her opening bid.

Chelsea’s position has already been strengthened by Leverkusen finishing fifth in the Bundesliga, missing out on the Champions League, while their own qualification will have only increased Havertz’s desire for a move.

The attacker returned to training with Leverkusen this week after a short holiday following the end of the Bundesliga campaign, although he could now be to move to London in the coming days.

Havertz has enjoyed a brilliant campaign, scoring 17 goals and providing nine assists across all competitions.

However, he won’t be the only headline arrival at Stamford Bridge this summer with deals for Hakim Ziyech and Timo Werner already secured while manager Frank Lampard is keen to add a left-back and centre-back to his squad.

Ben Chilwell is considered the next priority after Havertz but Leicester could demand as much as £80m for the England left-back.

Nicolas Tagliafico, Alex Telles and Robin Gosens are therefore more affordable options while Chelsea have their eye on West Ham ace Declan Rice as a long-term solution to their defensive issues.

Meanwhile, Kepa Arrizabalaga looks destined for the exit after being dropped against Wolves so Lampard will also need to sign a new goalkeeper before the start of next season.

Fantasy Premier League points: The top points scorers in FPL this season
Cristiano Ronaldo wife: How Juventus star feels about marrying Georgina Rodriguez
Best News
Recent Posts
This website uses cookies to improve your user experience and to provide you with advertisements that are relevant to your interests. By continuing to browse the site you are agreeing to our use of cookies.Ok