Iceland stunned England at Euro 2016 and Ragnar Sigurdsson loved it

‘Cocksure England looked down on us’: Iceland stunned Roy Hodgson’s Three Lions at Euro 2016 and scorer Ragnar Sigurdsson loved every minute of it

England’s humiliation was Iceland’s glorious high, and the equaliser, the brilliant saving tackle on Jamie Vardy and the thrill of the Viking thunderclap remain crisp and fresh in the mind of Ragnar Sigurdsson.

‘You can never forget,’ says Sigurdsson, as he reflects on Nice 2016 from his home in Copenhagen.

‘It was that kind of a game. A great game, great memories. I think about it from time to time and people often ask me about it. 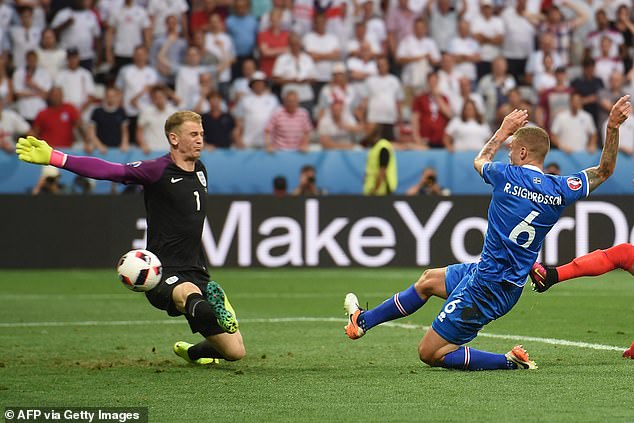 ‘They never ask about the goal. Nobody cares about that. It was a great feeling to score, but I don’t care too much about scoring goals. I care about winning. The tackle was probably my best action in the game. It was a crucial tackle.’

The goal was the equaliser. A long throw was helped on and Sigurdsson escaped Kyle Walker at the back post to force it past Joe Hart. England had struck first, a penalty converted by Wayne Rooney, but led for only two minutes.

The tackle was a beautifully timed slide in the closing stages to cleanly dispossess Vardy and preserve the lead held since Kolbeinn Sigthorsson’s goal in the 18th minute. 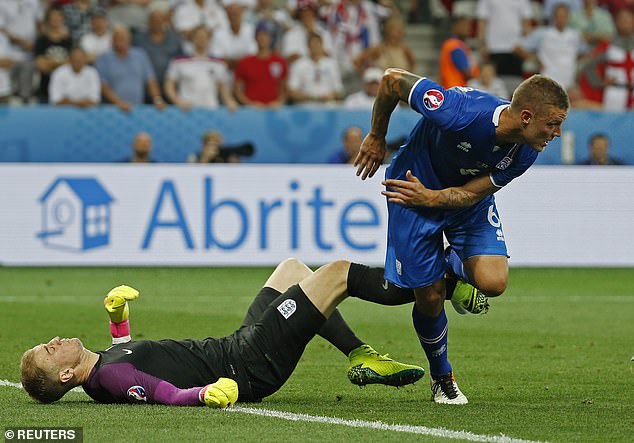 ‘In the tunnel before the game, it was my feeling that they looked down on us by miles,’ recalls Sigurdsson. ‘They were so sure they were a better team and were going to destroy us. I didn’t know what they were thinking but that’s the feeling I got. That’s how they looked to me and when they scored early on, that’s what killed them. They got the first goal and thought it was going to be a walk in the park. Then things changed.

‘It’s one of the great things about football. Anybody can beat anybody. If you don’t have the right attitude you can lose against opponents who are supposed to be much weaker.

‘For us, it is a good thing when opponents underestimate you, when they get cocky. That’s the biggest chance we have to get a big result.’

Iceland, the smallest European nation to qualify for a major tournament, were into the last eight. They had already denied Holland a place in the finals and held eventual champions Portgual to a draw in their opening game in France. Now they were scheduled to play the host nation in a quarter-final.

‘The ref blew the final whistle against England and everybody ran to a corner,’ says Sigurdsson, who still cherishes his man-of-the-match award. ‘I didn’t swap shirts. I’m not a collector of shirts. I’m not against it but what am I going to do with them? I’m not going to hang them on my walls.

‘Nobody shook hands with anyone and I didn’t see any of the England players when we finished celebrating. I was going to an interview when I walked past Roy Hodgson. He shook my hand and told me ‘‘good game”, he was very respectful.’ 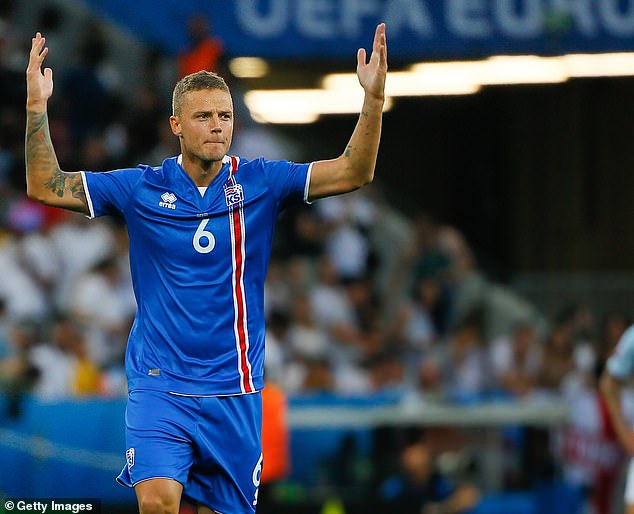 Sigurdsson stressed that Iceland benefited from England severely underestimating them

France ended Iceland’s run but the landscape changed for their players after that win.

‘There’s no chance Fulham would have bought me without that game,’ admits Sigurdsson, who was playing for Krasnodar in Russia. ‘That tournament, that game changed a lot for me and my team-mates. A lot of guys moved clubs but nobody got the “super-move”. Everybody thought they were going to have a big move, big league, big money. It didn’t happen.

‘My agent told me some Premier League clubs were thinking about an offer.

‘In the end, only Fulham made a move and I didn’t take long to decide. My dream was to play in England.’

‘It was a great chance and I’m ashamed to say it, but because it was the Championship and not the Premier League, I thought it was going to be easy,’ says centre half Sigurdsson. ‘I know why it didn’t go so well. I lost my head. For my whole career, I had my feet on the ground. I had many successes before that but it never went to my head. I never thought I was better than I was. 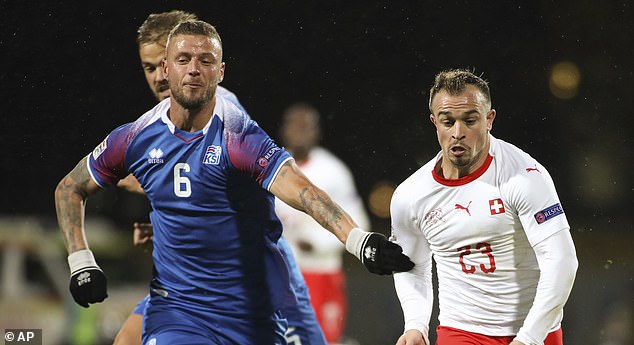 ‘I thought I was strong in that way. Then, when I got a chance to play in England, that’s when I decided to think I was a superstar. I didn’t take it seriously enough. I had one OK game, then a bad game, then a good game and then I started making silly mistakes and the coach stopped believing in me, which I can fully understand.

‘Then, you’re on the bench, confidence gone and it’s hard to find a way back. My mindset was wrong. Blame it on me and nobody else.’

Sigurdsson joined Rubin Kazan on loan and then Rostov on a permanent move. His Premier League ambitions were over.

Iceland’s rise continued, however, as they made it to the World Cup finals for the first time and held Argentina to a draw in their opening fixture. ‘We wanted to prove it was not a fluke,’ says the 34-year-old, now at Copenhagen.

‘It would have been easy to be satisfied with the Euros but we wanted to make it two in a row.

‘Attitudes were changing. At home, people expected us to win every time and other countries started to give us more respect. We qualified for the World Cup but we didn’t perform well enough. But we’ve had a good qualifying campaign for Euro 2020. We have to go through the play-offs and I believe we can.’ 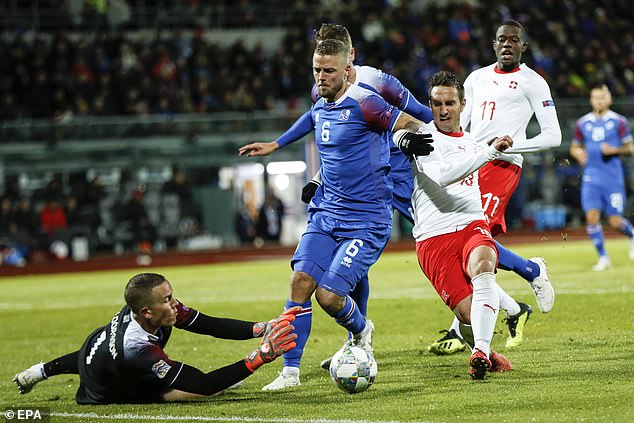 Iceland’s managerial team has changed since they beat England. Lars Lagerback is now manager of Norway. Former Sweden boss Erik Hamren is now at the helm for Saturday’s game.

The bulk of the squad remains intact, though Everton’s Gylfi Sigurdsson and Burnley’s Johann Berg Gudmundsson will miss this game and Ragnar Sigurdsson has an injury. Also absent will be the fans’ thunderclap at a game played behind closed doors.

‘Everybody liked it and it made the atmosphere amazing to do that with the fans, but I don’t know if anybody wants to do it any more,’ says Sigurdsson. ‘If we win we always do it, but I’m getting tired of it. It feels kind of cheesy.’

Iceland will stay with me. I know it is easy to say you have to learn from those experiences and use them to motivate you so that it doesn’t happen again, but I think it will always stay with the players who were there.

It was a very bad day for everyone involved. That is probably one of the worst places I have been in my career. Even though I didn’t play, I felt very much part of the team. We were all in it together and I really believed in us as a team. 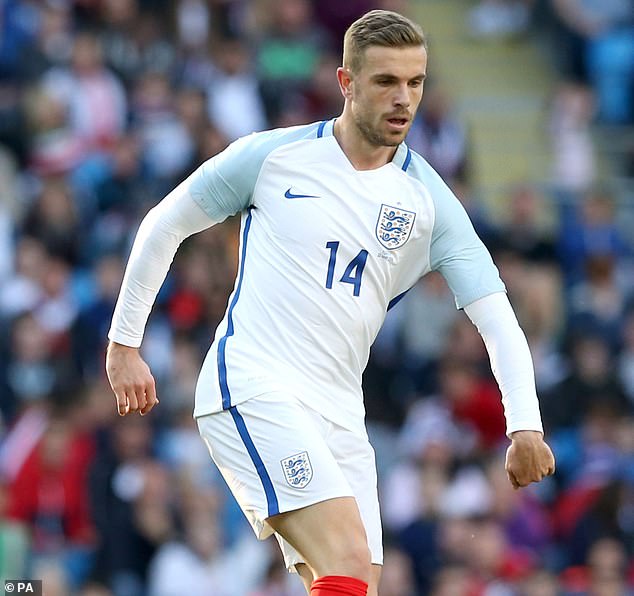 As it was, we let everyone down badly — the country, the fans, the manager. The dressing room afterwards was horrible. Really horrible. People were emotional. I think the manager was emotional with the talk that he gave afterwards. It wasn’t nice to see. Everyone is human.

Sometimes people think we are machines and they can just chuck everything at whoever the manager is and criticise. At the end of the day, I can tell you we do care. But I can understand why the fans were mad. They had every right to criticise us.

It was sad, really sad. Roy Hodgson said in a meeting to us after the game that he was going to be resigning.

It was worse the day after, when we were packing our bags and leaving for home. It was terrible. It just made you think that there is more to football. This man has just lost his job. 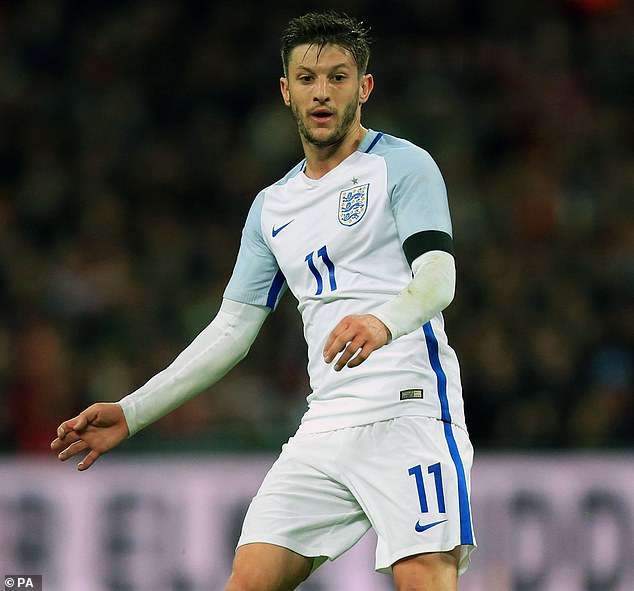 He is a very good man. He gave me my international debut. Even though I was desperate to play in that game and didn’t get on. He was under massive pressure. He lost his job and the whole nation was probably against him at that time. He looked vulnerable that day and it wasn’t nice to see an experienced man like that.

It was such a shock. Gary Neville said he will never be able to explain the last 60 minutes. I know what he means. I was sitting there thinking: ‘Why is this happening?’ I’ve been in two camps at tournaments and there was not an issue behind the scenes. The spirit was so good. We were bonding and fighting for each other.

Henderson and Lallana were talking to Dominic King

Gareth Southgate ready to give "beautiful player" Phil Foden his England debut
Southgate considering handing Foden first senior cap against Iceland
Best News
Recent Posts
This website uses cookies to improve your user experience and to provide you with advertisements that are relevant to your interests. By continuing to browse the site you are agreeing to our use of cookies.Ok