Manchester United may not be able to reach the points tally now required to win the Premier League title, according to Liverpool legend Jamie Carragher. Liverpool finished the campaign on 99 points in winning their first top-flight title since 1990. In each of the last four seasons the top side have amassed at least 93 points, which have been four of the top five points tallies for a champion in Premier League history – Chelsea’s 95 in 2005 being the exception.

Carragher believes United, whose win over Leicester on Sunday confirmed a third-placed finish this term, are the side most likely to challenge either Liverpool or Manchester City in the coming seasons.

However, the Sky Sports pundit says both Liverpool and City have set the benchmark for points so high that it will be hard for challengers to reach.

Asked who can challenge Liverpool and City, Carragher said: “Well at the moment I think if nothing changes – but it will change in terms of transfers, you’d expect United, it looks like they’re going to bring [Jadon] Sancho in. 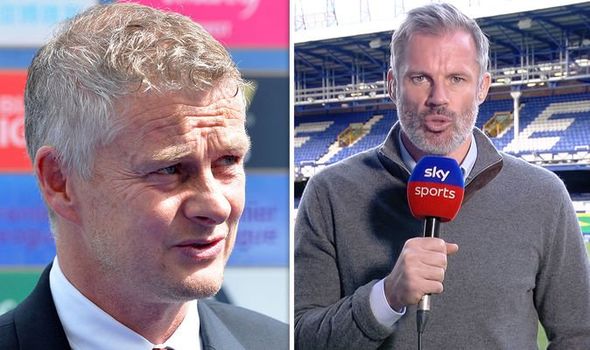 “So I think Manchester United maybe, them or Chelsea.

“I’m still not convinced that Chelsea or United could get 95-plus points, which at this minute is what you have to do basically to be in with a shout for the Premier League.

“It’s not that Liverpool have actually got better this season, it’s just that Man City have dropped off.

“That’s the big difference, they’re around the 80-point mark and you see the points total Liverpool have got.

“So whether United can really join that race I’m still not sure, we’ll have to see what they do in the market really.”

City and United both have to compete in the Champions League and Europa League respectively in August ahead of the new Premier League season starting in September.

And Carragher reckons that could put Liverpool at an advantage in their title defence.

“But also City going in the Champions League as well, I’m not sure if that will be a benefit or a hindrance when the Premier League starts,” he added.

“So I think Liverpool’s position now in terms of not actually playing too many games between now and the start of next season may give them a little bit of an edge on Man City.”

Roy Keane makes ‘huge’ Man Utd transfer prediction about the Glazers and Ed Woodward
Garth Crooks names five Liverpool players in team of the season – plus Maguire
Best News
Recent Posts
This website uses cookies to improve your user experience and to provide you with advertisements that are relevant to your interests. By continuing to browse the site you are agreeing to our use of cookies.Ok