There was a time when the Kop used to taunt Chelsea with chants of “you ain’t got no history.” Now, with their record goalscorer in the dugout, it is inescapable. Comparisons with the past can abound and when the giant figure of Petr Cech walked across the forecourt at Bramall Lane 45 minutes after a demoralising defeat, it prompted another.

It is a moot point which of Chelsea’s greatest generation they would, at his peak, be the biggest asset to the current team. Frank Lampard? There is no one remotely resembling a 20-goal-a-season midfielder now, though the manager’s various combinations have at least brought some of the creativity for a side who have already scored as many goals as they did last season.

Ashley Cole? The expensive interest in Ben Chilwell shows how left-back is a priority. Saturday’s loss to Sheffield United nonetheless lent itself to the idea that John Terry in his prime would be most beneficial. The 2005 era Terry, brimming with a confidence that verged on arrogance, cool in possession and commanding in the air, surely would not have been bullied by Oliver McBurnie and David McGoldrick, United’s very own Big Macs. Lampard bemoaned the way Chris Wilder’s team talked more. Were Terry to have played in an era of empty stadia, his voice would have echoed around them.

“It was a horrible game for the players and none of the players played well,” said Lampard. That felt particularly true of the centre-backs. Andreas Christensen and Kurt Zouma contrived to leave McBurnie unmarked to head in United’s second. Antonio Rudiger came on at half-time and, with the lamest of clearances, supplied McGoldrick’s second. Individually, Rudiger may be the best of Chelsea’s central defenders, but he began three successive games on the bench in Lampard’s never-ending quest for a combination. He tried a duo, then a trio, then a duo again at Bramall Lane.

“I would love to have consistency in the back four, or back two or three or whatever what you want to call it,” the Chelsea manager reflected. He has tried six partnerships, even before various three-man defences are factored in, but there is no Terry-esque leader to build around, no Terry-esque figure who everyone from Ricardo Carvalho to Gary Cahill could partner. Chelsea are on course to concede more league goals than in any season since 1996-97. The 49 they have already let in is more than three times as many as the defence Terry anchored 15 years ago permitted. 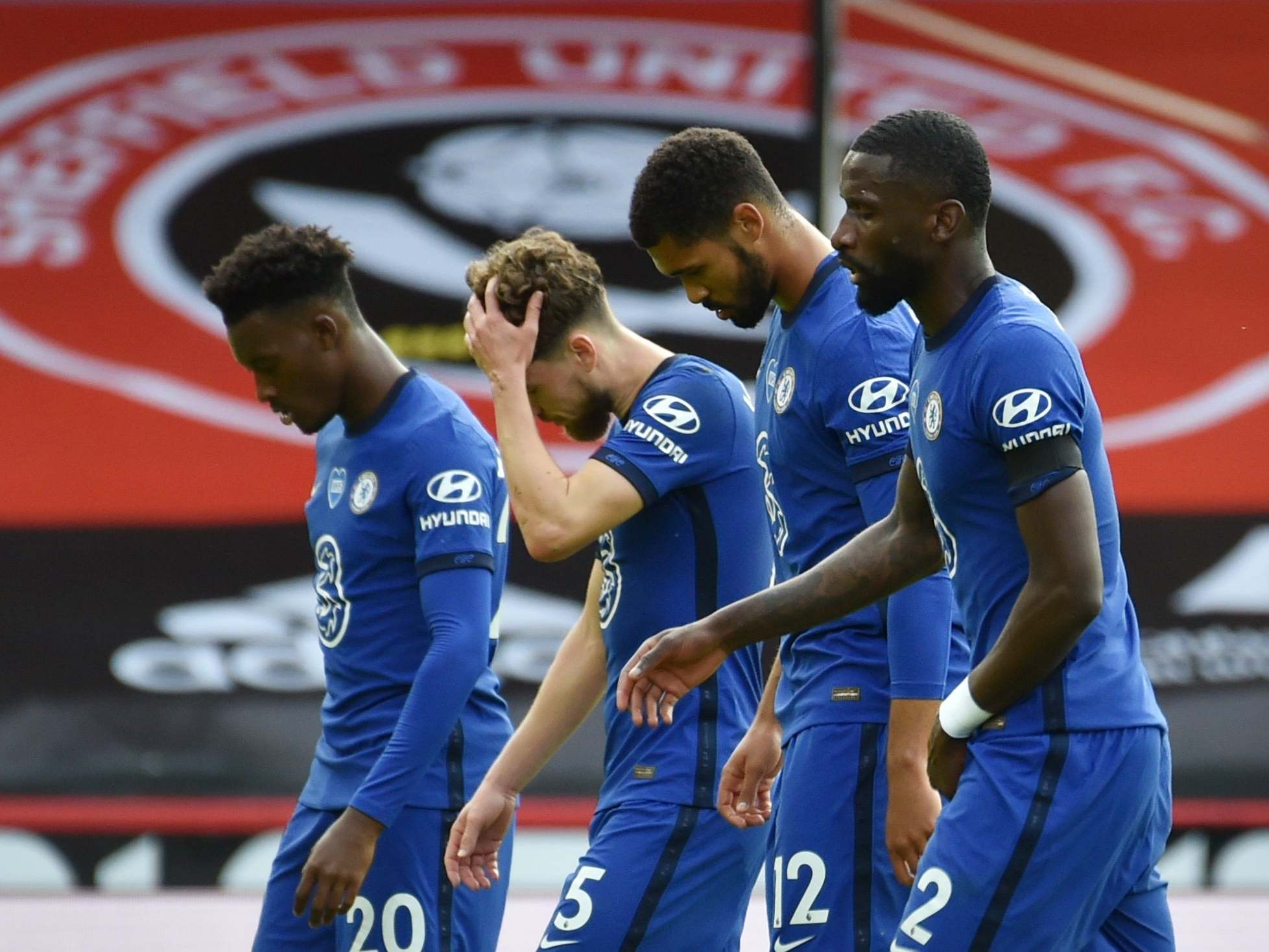 The numbers are damning and, at Bramall Lane, the manner of them was still more so. And yet here is another number: substandard as Chelsea’s defence often appear, much as they seem to need a makeover, for all the individual failings, they have permitted the second fewest shots on target this season; fewer even than Liverpool. Yet nine clubs have a better defensive record.

Which, indirectly, brings us back to Cech; now he is involved in Chelsea’s recruitment and it would be instructive to know who, had he been in his current role two years ago, he would have targeted to replace Thibaut Courtois.

Because both sides had four shots on target on Saturday. Dean Henderson made four saves. Kepa Arrizabalaga made one and if that was rendered harder by a double deflection, it nonetheless led to McGoldrick’s opener. He did not move for McBurnie’s header.

In isolation, such games can happen. Yet Crystal Palace and West Ham each had four shots on target against Chelsea and scored two and three respectively. In January, Arsenal got two from two. In February, Leicester scored two from three.

Collectively, it is not a small sample size. Arrizabalaga has the lowest save percentage (56.5) of any Premier League regular this season. To put it another way, for every 100 shots on target, Alisson would save 20 more, Henderson another 15, Nick Pope another 14. The Spaniard’s save percentage is lower than Claudio Bravo’s rate in his Premier League career. It may not necessarily make him the Stamford Bridge Bravo but the recurring theme is that he is beaten too often. Chelsea paid £71.6 million for a goalkeeper who doesn’t save shots.

That world-record price means Chelsea are stuck with Arrizabalaga. His true value may be a fraction of that fee. His shortcomings probably proved Wilder wrong when the Bramall Lane bargain-hunter mused: “Everybody keeps saying to me none of the Sheffield United players would get in the Chelsea side, and possibly they wouldn’t.” But Henderson surely would, just as Pope would.

And so, if Chelsea could turn back time, would it be for the goalkeeper with the best save percentage in Premier League history. He saved 91.3 per cent of attempts he faced in 2006-07. His name? Petr Cech.

Gareth Southgate's back three is how England can win a tournament

Manchester City will learn their Champions League fate at 9.30am
Chelsea 'set to cash in on injury-plagued star N'Golo Kante'
Best News
Recent Posts
This website uses cookies to improve your user experience and to provide you with advertisements that are relevant to your interests. By continuing to browse the site you are agreeing to our use of cookies.Ok