Incredible footage from Tottenham’s upcoming all-access Amazon documentary has leaked showing Jose Mourinho calling on his players not to play like ‘stupid c****’.

On the back of Manchester City and Sunderland documentaries, Tottenham are the latest club to come under the microscope.

The Amazon series, called ‘All or Nothing’ will show the trials and tribulations of a difficult season, which saw the departure of Mauricio Pochettino and the shock arrival of Mourinho in November.

The documentary is not set to be released for a few months but a 30-second clip from it has been posted onto social media.

The footage appears to be early on in his tenure at Spurs and sees Mourinho attempting to give a rallying call to his players. 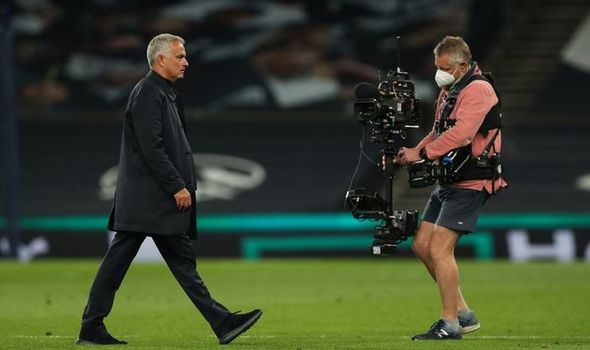 He said: “You need to communicate. And maybe I am wrong [but] I feel that you are honestly a very nice group of guys but for 90 minutes you cannot be nice.

The reaction of Christian Eriksen is caught on camera with the Denmark star looking perplexed while other players can be seen laughing.

Speaking last week, Mourinho admitted he felt uneasy with the cameras being around 24/7.

“I try to forget them during the time,” he said. “If you ask me [is it] something that I enjoy, no. I don’t like the feeling of being in ‘Big Brother,’ I tried to forget them and I think I managed to do that for the majority of the time.

“I have no idea what is there. I have no concerns, it is just… nothing is fake, everything is real.

“For them, it must be great because they have the day by day, 24 hours of what a football club is, a dressing room is.

“They have everything so, so, so, so real. Nobody acted for it. It is just the way it is.

“Also because I know better than anyone what is our day by day here but I think it will be very, very interesting for the people that loves football, loves sport and I think it is going to be great for them.”

Why lost soul Gareth Bale finally needs to push through Madrid exit
Mikel Arteta insists he has 'full faith' in Arsenal's hierarchy
Best News
Recent Posts
This website uses cookies to improve your user experience and to provide you with advertisements that are relevant to your interests. By continuing to browse the site you are agreeing to our use of cookies.Ok