Jose Mourinho will come up against Slaven Bilic this weekend, insisting he is much calmer these days compared to when the pair previously met four years ago.

That afternoon in November 2016, Mourinho was in charge of Manchester United and sent off for kicking a water bottle – his second red card in a month – during a 1-1 draw with Bilic’s West Ham at Old Trafford. 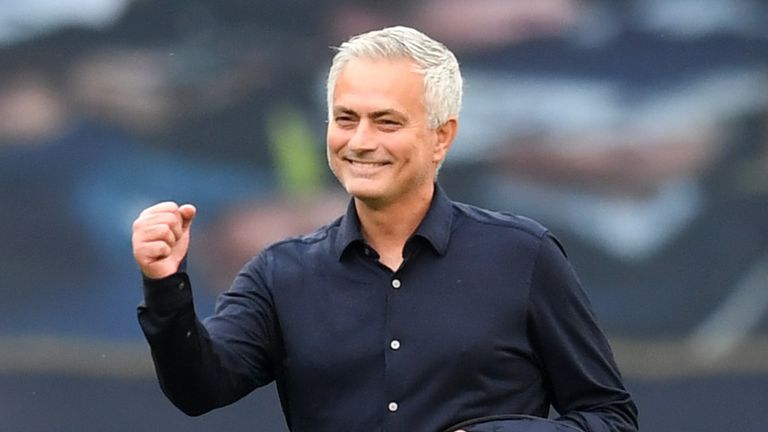 Ahead of taking his in-form Spurs side to The Hawthorns with the chance to go top of the Premier League, the Portuguese believes he now has a handle on his passion, which has not waned.

“The good thing is that – for a long, long, long, long time – I didn’t get a suspension or a ban,” Mourinho, who admits it is “sometimes” very hard to stay calm, said. “I haven’t lost my passion, but I am more experienced and have more emotional control.”

The water bottle-booting was provoked by Paul Pogba getting a yellow card for simulation; a caution Bilic admitted afterwards was harsh. And Mourinho said: “That’s because he’s a football guy. He has a lot of experience and, I think, apart from our friendship, football people understand this kind of situation.”

If Spurs beat Bilic’s West Brom on Sunday, they can go top of the Premier League, at least for a few hours. And Mourinho, despite repeatedly refusing to contemplate Tottenham as title contenders this year, admits he would like to see that.

“It’s nice. We are not going to hide that you always look at the table and where you are,” he admits. “If you look through clinical, cynical eyes, you see that (being top) doesn’t mean a lot; the league is so compact.

“But to look at it and see you are third or second or fourth or first makes a difference.”

Before West Brom, Spurs take on Ludogorets in Bulgaria on Thursday night, a week after they suffered a disappointing loss and performance at Royal Antwerp. After that match, Mourinho criticised his players, even on social media.

Under an Instagram photograph of himself on the team bus afterwards, he said: ‘Bad performances deserve bad results. Hope everyone in this bus is as upset as I am. Tomorrow 11AM training.”

Some former players, including Darren Bent and Martin Keown, criticised the move, but Mourinho said the barb was not aimed at provocation or even inspiration. “No that was not the objective,” he said. “I am not an Instagram man in my nature. I have to be honest. I’ve nothing to hide.

“I was asked by my sponsors to do it because, when I closed my account a few years ago, we had a few million followers and the sponsors were not happy when I closed it, so now I am doing it bit by bit.

“Do my players look at it and read it? I’ve no idea. The diversity of the posts makes it just good fun in the end, and people like to follow for that reason. It’s quite funny. No problem.”

Bulgaria on Thursday. The West Midlands on Sunday, Tottenham’s busy schedule continues, but Jose has taken time to contact Diego Maradona, who’s just had brain surgery in Argentina. “My thoughts I express privately to him. I’m not able to speak with him of course now, but still able to send my message direct to his phone and hopefully everything goes well.”

Man Utd sacking Ole Gunnar Solskjaer may have taken giant step closer
Paul Scholes rates Donny van de Beek performance in Man Utd defeat to Istanbul Basaksehir
Best News
Recent Posts
This website uses cookies to improve your user experience and to provide you with advertisements that are relevant to your interests. By continuing to browse the site you are agreeing to our use of cookies.Ok