Liverpool boss Jurgen Klopp has more power over a club’s support than any other manager in recent English football history, according to Reds legend Jamie Carragher. Klopp has led Liverpool to the holy grail this season with a record-breaking Premier League title win, ending a 30-year wait for top spot in England.

Carragher says Liverpool supporters have had belief in Klopp ever since he replaced Brendan Rodgers in late 2015.

And he believes the German is treated like a God by fans and that he has more power over them than the likes of Sir Alex Ferguson did with Manchester United supporters.

“Yes [Liverpool fans have always believed in Klopp], no doubt about that,” Carragher said on Sky Sports.

“I’ve never seen a manager have so much power over a support in some ways. 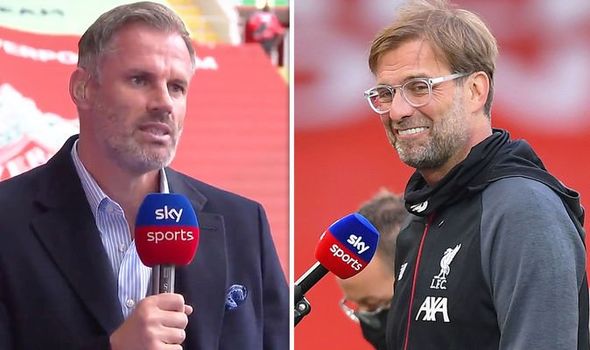 “Maybe you go back further before my time, Bob Paisley and before that Bill Shankley.

“But even throughout this country, I’m not just talking about Liverpool, I’m talking about even Sir Alex Ferguson, maybe Jose Mourinho when he was at Chelsea.

“Whatever Jurgen Klopp says, it’s almost gospel in this city.

“He’s almost like a God-like figure, especially now. And it is a monumental job what he’s done.”

Carragher says Klopp’s job is even more impressive because of the managers he has been up against during his time in the Premier League.

The former defender also says Klopp has had to build his squad with less funds than his rivals.

“You talk about gradually he’s got there, it’s taken four or five years,” Carragher added.

“Liverpool are not a club who can one season have a bad season and then just go and blow hundreds of millions in the transfer market and get close next season.

“Manchester United can do that, maybe Chelsea have proven that in the last few years – Liverpool has to be gradual. That’s what he’s done.

“He had to get into the Champions League first, then he had to challenge for the title and then it goes again.

“The reason I say it’s a monumental job is because what he’s up against is great managers in the Premier League – Pep Guardiola’s here, Pochettino, Wenger was here, Jose Mourinho was at Manchester United, all had experience, more experience than him of the Premier League.

“They also had more money to spend and I also include Tottenham there in that if you actually look at what Jurgen’s spent, net spend, he’s only spent £80m in five years which is unbelievable compared to his rivals.”

Major problem identified for Chelsea next season as squad playing minutes analysed
Southampton earmark Liverpool free agent to replace Everton-bound Pierre-Emile Hojbjerg
Best News
Recent Posts
This website uses cookies to improve your user experience and to provide you with advertisements that are relevant to your interests. By continuing to browse the site you are agreeing to our use of cookies.Ok