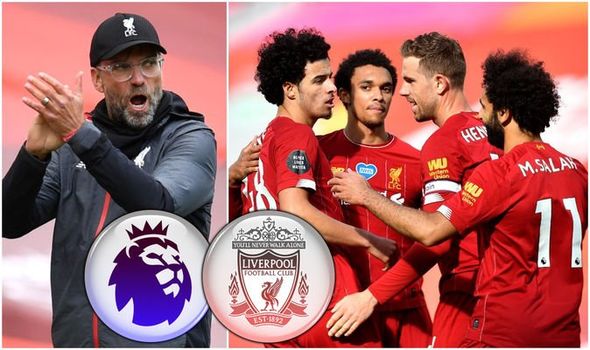 Liverpool manager Jurgen Klopp insists his side cannot afford to become too preoccupied with the prospect of beating Manchester City’s Premier League points record between now and the climax of the season. The Reds moved on to 89 points with a 2-0 win over Aston Villa at Anfield on Sunday night.

The newly-crowned Premier League champions claimed their 29th win of the season from 33 games thanks to late second-half goals at the Kop end from Sadio Mane and substitute Curtis Jones.

It means with 15 points to play for between now and July 26, Liverpool need to pick up 12 to surpass City’s Premier League record points total.

Pep Guardiola’s charges amassed an unmatched 100 points in 2017-18 but the Merseyside outfit, if they win all of their remaining games, can set a new record of 104.

But Klopp wants his players not to get distracted by thinking too much about adding further gloss to their title-winning campaign – because of the difficulty of the games ahead.

Liverpool take on Brighton in mid-week with the Seagulls not yet mathematically safe from relegation before taking on Burnley, who are keen to tie up a top-half finish. 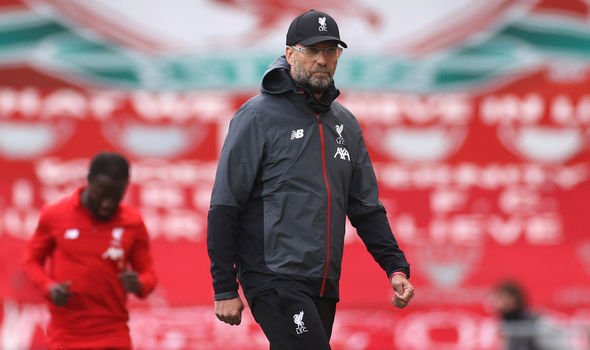 Clashes with Arsenal and Chelsea, both chasing Champions League football, await before taking on in-form Newcastle away from home on the final day of the season with the Magpies also competing for a top-10 spot.

And while Liverpool’s win over Villa at Anfield was their 17th home win this season and their 24th consecutive home success, the German coach is not getting carried away with which records they can write, with the long-awaited title – which eluded the club for 30 years – already wrapped up.

That’s with his side also having the potential to become the first Premier League team ever to win all 19 of their home games in one single season.

Already the earliest ever title winners in the Premier League era, four victories from five games would also see Liverpool set a new record for most wins in a season, currently set at 32 by City, while they can better the 19-point winning margin that Guardiola and co. won the league by in 2017-18.

Told that Liverpool’s home record is phenomenal, Klopp said to BT Sport: “It is. It’s not that I’m not interested in records, the only thing I can say is there’s no chance to win records if you constantly think about records. 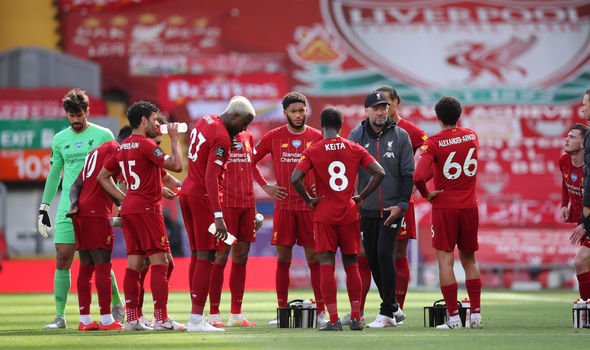 “You just have to win the games and that’s what we try to do.

“We can see how exceptional last season was for example with 97 points, to get there – even now with 89 which is obviously an exceptional mark as well – we need to get eight points to have only the points tally from last year.

“We don’t think about these things, three points to get is difficult enough. Brighton is waiting, fighting for the league, in a good position now with relief maybe.

“If they do something against us, they could pretty much make sure they will stay in the league. 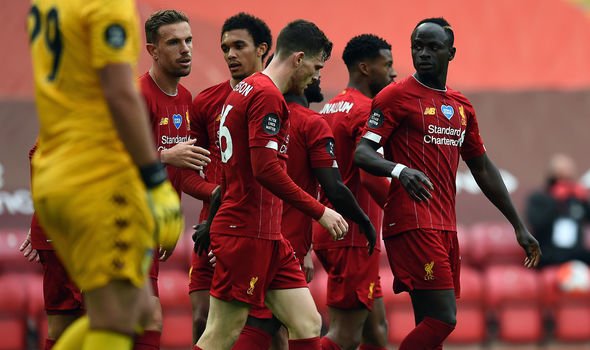 “Today Aston Villa was fighting with all they had and tried to get here and there and attack and maybe a finish and it makes life uncomfortable.

“I like it, it was not a brilliant performance but it was a good performance which earns us three points.”

Klopp raised a frustration that Liverpool were not awarded a penalty in either half in two incidents involving Mohamed Salah.

The Egyptian twice went to ground under pressure but referee Paul Tierney refused to point to the spot on either occasion.

And the Liverpool manager felt the shouts were similar to the penalty that Manchester City were given in their 4-0 dismantling of the Merseyside club at the Etihad on Thursday night.

“Very difficult game with Villa good organised, made it really tricky for us, they had counter-attacks, stuff like that,” Klopp added.

“The wind made it tricky for both teams but obviously it was really hard today to play normal football.

“But we had chances to stay on the right track and do the right things more and more, especially in the second half, we had more of the good moments when we the positioning was slightly better and all of that stuff.

“We made three changes in decisive areas which was important I think from a physical point of view.

“You could see we needed a little bit to get used to it but last 20-25 minutes, the goals we scored, we could’ve scored a similar goal earlier when Sadio was in a similar situation where he makes the step and he’s already there.

“I think two situations could and should have been penalties with Mo.

“We got a penalty for arms and stuff like this against Manchester City and today you don’t give these penalties when people do exactly the same.

“That’s a bit unlucky but all the rest, I’m completely fine. We are where we are because we won the difficult games. Tonight it was again a difficult one but we won it.

“You could see for Fabinho that it was really hard today to go through that so Henderson in the six and Naby [Keita] next to him and Gini [Wijnaldum] slightly higher plus then Bobby in the really decisive area helps obviously.

“Villa was used to Divock [Origi] in a position. We wanted him to be higher, we didn’t want him to drop as much as Bobby [Firmino] usually is doing. 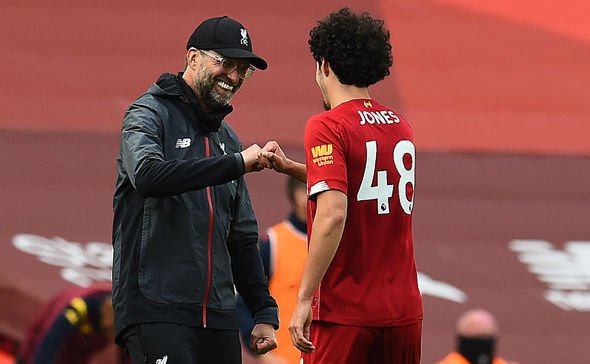 “That’s why we changed a little bit in the game with Sadio coming into the position and it felt more natural.

“That’s what we tried and when the three players who play these positions usually came on, that helped of course.”

Goalscorer Jones, 19, only signed a new long-term contract on Saturday and capped off a week to remember with a late effort to cap off victory.

And Klopp said of the Liverpool-born attacker: “Curtis has a lot of qualities and is he’s in these positions. The first situation, the dribble and the finish [over the crossbar], I liked.

“There’s no lack of confidence. The next situation, a cross which wasn’t perfect but Mo made it happen that the ball comes inside again and he’s in a position in the six-yard box pretty much.

Man Utd urged to pay ‘big money’ for Borussia Dortmund ace Erling Haaland by club legend
Sadio Mane’s selfish reason for wanting Aston Villa to avoid relegation
Best News
Recent Posts
This website uses cookies to improve your user experience and to provide you with advertisements that are relevant to your interests. By continuing to browse the site you are agreeing to our use of cookies.Ok