Superiority has its side-effects. Kevin De Bruyne had just scored one of the goals of the season, bewildering Marco Stiepermann with his soft-shoe shuffle and bypassing Tim Krul with his 20-yard shot. The scorer himself looked underwhelmed.

Some 90 minutes later, he was congratulated on equalling Thierry Henry’s 17-year-old record of 20 assists in a Premier League season. “I have got two more – you guys took two more away from me,” he said and if he erred in accusing broadcasters of denying him of the other pair, both scored by Raheem Sterling against Arsenal, it spoke to his demanding nature. De Bruyne was not satisfied by his excellence or eminence. He had allied Beckham-esque crossing, Gerrard-esque drive and a Bergkamp-esque ability to pierce a defence with a through pass and it probably took that combination to equal Henry; more favourable adjudication was needed to leapfrog him.

The fact the Frenchman’s record had stood since 2002-03 was an illustration that, if not unbeatable, it was hard to match. Mesut Ozil and Cesc Fabregas had twice come close. So had De Bruyne who, before an injury-hit 2018-19, had 18 and 16 in successive seasons. It took something spectacular to match Henry and, by his own standards, De Bruyne did it in vain. Had either of his glorious goals against Norwich been an assist instead, he would have relegated Henry to second place. “Instead, he’ll have to share the record,” said Pep Guardiola.

His side reached milestones aplenty in a 5-0 rout, a tale of two Cities both socially distanced from anyone else in the table. Ederson got the Golden Glove which drew a magnificently lukewarm endorsement of the back four from De Bruyne. “In the five years I have been here the defence has been criticised a lot but we have done fairly okay,” he said. To put it another way, in the two seasons the defence has delivered, City have been champions. In the other three, they have finished 15, 15 and 18 points adrift.

The paradox in De Bruyne’s individual dominance has been that the selflessness to prefer assists to goals shows it comes for the team’s cause in a team game, but he was denied the first major individual honour. Jordan Henderson claimed the football writers’ footballer of the year prize on Friday as the captain, driving force and symbol of a side who ended a three-decade wait and who made a record-breaking start to the season. The case for De Bruyne was different. It was about consistency, creativity and a capacity to look a class above everyone else. Sterling brought up 30 goals for the season but De Bruyne should attract a greater share of the vote in City’s own player of the year award than the average dictator in a rigged poll. 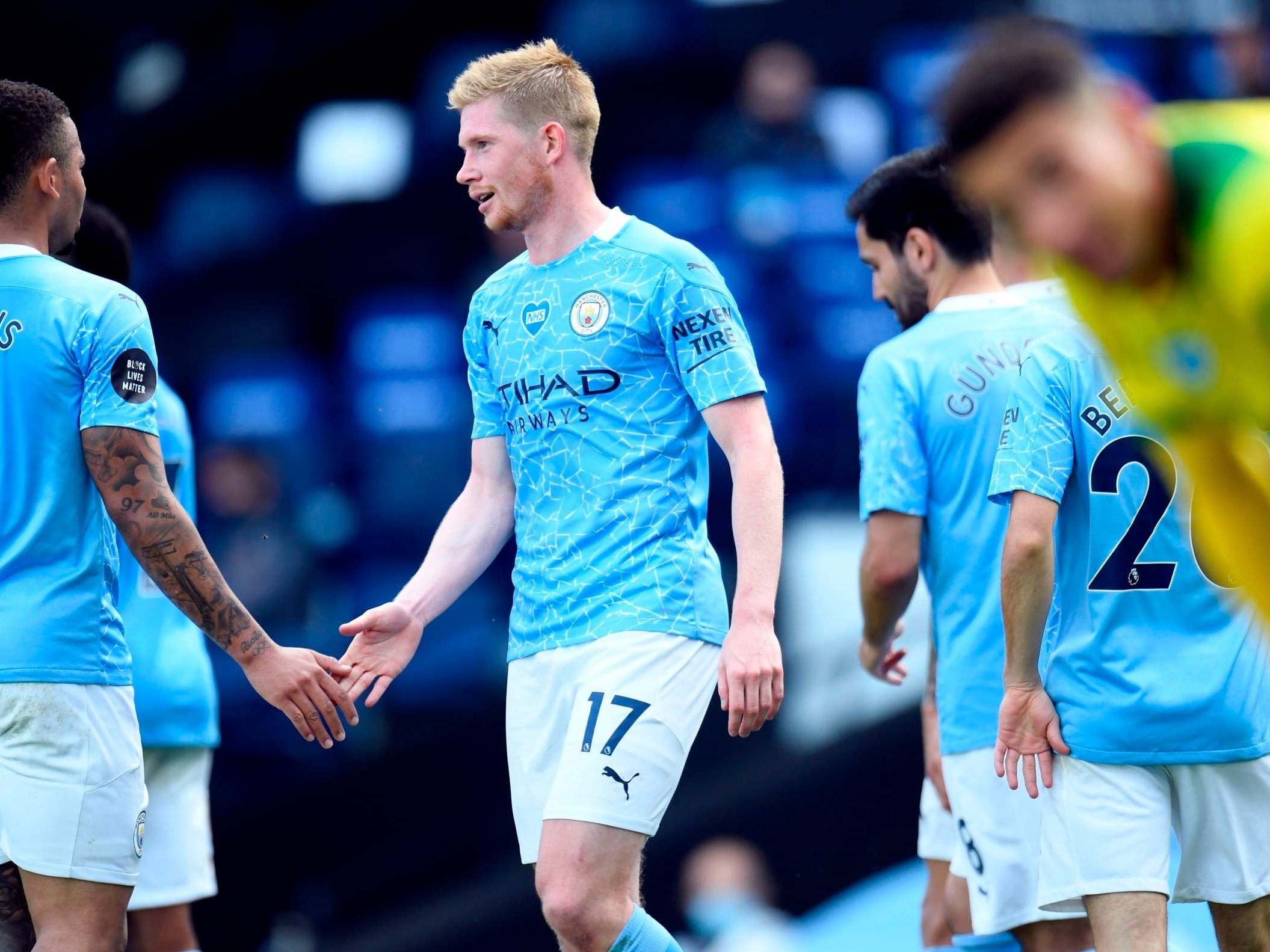 “I need my teammates, obviously I am creating for them to score, and I am grateful when they do,” said the Belgian. It is tempting to wonder if he would have overhauled Henry if the clinical Sergio Aguero had started more than 18 league games. As it was, he finished top of the league for assists, through balls, key passes, passes into the penalty area, shot-creating actions, expected assists and a combined goals plus assists table. With 13, he was by far the top-scoring central midfielder.

De Bruyne was directly involved in 33 goals. Crystal Palace mustered 31 and they came 14th, but then there are times he seems to defeat teams single-handedly. The second paradox of his season is that Guardiola espouses collectivism and yet his City have become reliant on one player.

His latest masterclass ensured David Silva had to share the spotlight, which probably suited the departing captain. Guardiola’s use of both as “free eights”, to borrow De Bruyne’s phrase, was one of his first moves and one of his best. Sidekicks have been soulmates and opposites, Silva forever protecting possession while De Bruyne risks it in a willingness to make things happen.

Silva’s late withdrawal ended his Premier League career. Chairman Khaldoon al-Mubarak rang the Spaniard in the dressing room afterwards to thank him for everything while teammates and the thrashed Norwich players applauded as he went off. Guardiola reflected: “It was the smallest standing ovation of all time but he will come back to receive the ovation he deserves.” Silva is arguably City’s greatest ever player but, and while the numbers are only one factor when such assessments are made, he recorded 93 in a decade in the Premier League. In half that time, De Bruyne has 66. When the time comes to bid him farewell, perhaps he will have displaced Silva from his position in the City pantheon. It is one title he will not have to contest with Henderson.

Fred and Nemanja Matic continue to enjoy holidays with their partners

Borussia Dortmund 'begin talks with Ikone as Sancho replacement'
Bonucci revels in 'most difficult' Serie A win of Juventus' run
Best News
Recent Posts
This website uses cookies to improve your user experience and to provide you with advertisements that are relevant to your interests. By continuing to browse the site you are agreeing to our use of cookies.Ok