Marcelo Bielsa has been spotted with a detailed scouting dossier and eagle-eyed fans managed to establish that the report was on St Pauli’s Finn Ole Becker. The 20-year-old star has emerged as a real talent in the 2. Bundesliga, where he played 28 matches last season.

Now it looks as if the Argentine could be lining up a swoop to bring him to Elland Road.

Bielsa has always been completely fascinated by analysis and spends the majority of his downtime working with data.

That was something that came to the fore last year when he held a PowerPoint presentation in response to the Spygate saga.

The 70-minute showing which is said to have taken 300 hours to make, was designed to show that his teams do not get a sporting advantage despite their homework. 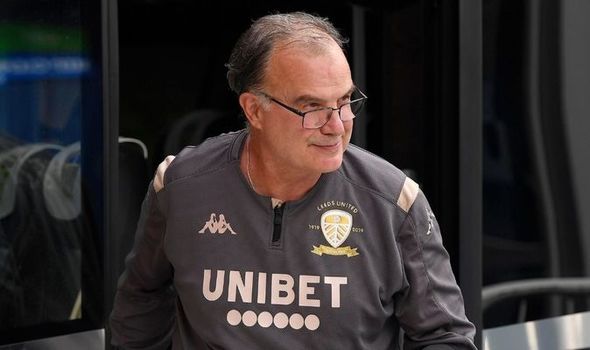 In one famous line, he said: “Of each opponent we watched all the games of 2018/19 – we watched the 51 games of Derby County. The analysis of each game takes four hours of work – why did we do that? Because we think it is professional behaviour.”

The Leeds boss was snapped with a fan in Costa coffee with several pieces of paper, which appear to show scouting reports on Ole Becker.

Fans have also claimed that Reading’s Michael Olise profile was also on the sheets of paper.

Leeds are set for a busy summer as they look to try and consolidate their Premier League status next season.

The club have reportedly failed with a £22million bid for Ben White, which was already an improved offer.

They may now need to explore other targets at centre-back, with Brighton’s stance clear.

Former Leeds goalkeeper Paul Robinson believes his old side need to start the transfer window by securing permanent deals a White having already retained another member of their Championship-winning squad in Jack Harrison, agreeing a 12-month loan extension for the Manchester City winger.

“Consolidation is the right word, they need to stay in the Premier League,” Robinson told Sky Sports.

“Spending has to be sensible and has to be geared to keep the club in the Premier League.

“They’ve had a player on loan Ben White from Brighton who has been in my opinion player of the season.

“Him and Jack Harrison would be key if they could possibly retain them. Brighton have gone on record by saying they don’t want Ben White to leave and quite rightly so.

“I’m sure he will have much bigger potential suitors and maybe even Champions League football because he’s such a good player.

Ronaldo tells Pirlo what Juventus must do next after Champions League exit
Kai Havertz 'agrees five-year deal with Chelsea'
Best News
Recent Posts
This website uses cookies to improve your user experience and to provide you with advertisements that are relevant to your interests. By continuing to browse the site you are agreeing to our use of cookies.Ok