Leeds United have won the Championship title after Brentford were beaten by Stoke City at the bet365 Stadium on Saturday afternoon. Having had their Premier League promotion confirmed on Friday night by West Brom’s loss to Huddersfield, the Bees’ defeat means Leeds can no longer be caught by any other team in the league.

The Whites will return to the Premier League for first time in 16 years and they will now also go up with their first second division title since 1990 in hand.

It is Leeds’ first major trophy since clinching the 1991-92 Division One title won under the iconic Howard Wilkinson, who also delivered that second tier triumph two years earlier.

Marcelo Bielsa’s side can reach the 90-point mark by beating Derby County at Pride Park on Sunday (2pm), with Leeds having never previously won more than 86 points in a single season in any division.

The Rams could hand Leeds a guard of honour, which would be all the more sweet for the Yorkshire outfit following their drama with Derby over the past 18 months.

Leeds will then round off their Championship campaign at home to relegation-threatened Charlton next Wednesday (7.30pm), when the title-winners will presumably lift the trophy. 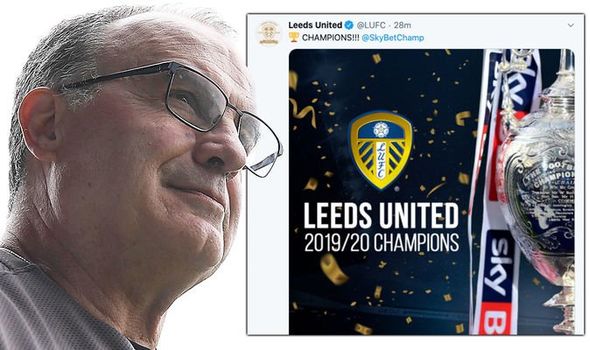 Brentford’s loss to Stoke means that West Brom, despite their reverse to Huddersfield, remain in control of their own destiny and will look to join Leeds in clinching automatic promotion and avoiding the tension of the playoffs.

Had Brentford picked up even a point in the Potteries – having won all of their previous eight matches beforehand – they would have leapfrogged the Baggies courtesy of their superior goal difference.

The Londoners are now left hoping that West Brom slip up at home to QPR, while they take on Barnsley, currently rooted to the bottom of the table.

Stoke are meanwhile now mathematically safe from relegation to League One after a sturdy display defensively kept out the Championship’s highest-scoring side.

Leeds captain Liam Cooper meanwhile pinpointed the relentless work ethic of his team-mates throughout the campaign as pivotal to their success.

He told LUTV of his team’s achievement: “This wasn’t in the plan, we expected both teams [West Bromwich Albion & Brentford] to win every game. 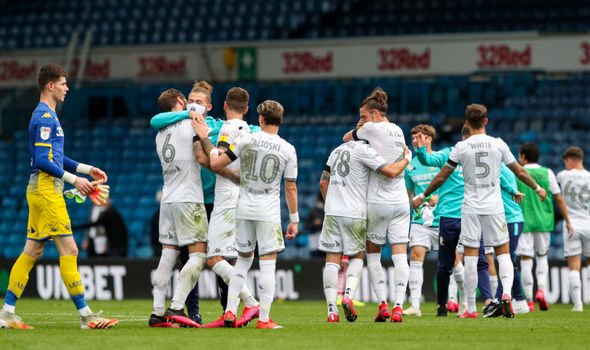 “We thought we’d get together and watch the game, not expecting this at all.

“I’m absolutely delighted, this club has been in the doldrums for 16 years and to be part of the club and this group of players in honestly unbelievable.

“The hard work which goes in every single day has been hard, but these boys have been unbelievable backed by our amazing fans.

“I’m over the moon and delighted to lead this group of players.

“Everyday is unbelievable, we learn so much and from the bottom of my heart, I want to say thank you to the club and these boys.

“This group doesn’t know the meaning of giving up and I’m so pleased for all of them. This smile is going to take some wiping off my face.”

Whites owner Andrea Radrizzani meanwhile said: “I would like to congratulate our fantastic manager, Marcelo Bielsa, the entire coaching and backroom staff, and of course all of the players who have performed outstandingly throughout the season.

“Thank you to all our wonderful fans – I am so grateful for their loyal and unwavering support every season. They played a crucial role to drive us forward to promotion this year.

“Since my journey with Leeds United began in the summer of 2017, we have strived for this moment and it is a time for us all to celebrate the club returning to where we belong.

“This is truly an amazing achievement and I’m so proud to be part of this club’s success.

“But our ambition does not stop here – and we are determined to continue on this path of achievement in future seasons.”

Mikel Arteta insists he has 'full faith' in Arsenal's hierarchy
Gary Neville says fans are the only thing missing from positive Premier League restart
Best News
Recent Posts
This website uses cookies to improve your user experience and to provide you with advertisements that are relevant to your interests. By continuing to browse the site you are agreeing to our use of cookies.Ok