Michy Batshuayi is reportedly being monitored by Leeds as Marcelo Bielsa plots a potential reunion with the Chelsea striker. Batshuayi has endured a tough season at Stamford Bridge and could move on this summer, although his transfer fee and wages may pose a problem to any deal.

Frank Lampard remains unconvinced by the Belgian frontman and Batshuayi is believed to be surplus to requirements in west London.

Leeds were therefore thought to be eyeing the 26-year-old as a potential signing this summer and interest from the Championship winners has now been confirmed.

The Athletic journalist Phil Hay suggests Bielsa is familiar with Batshuayi’s strengths from their time together at Marseille, meaning the pair could strike up a working relationship quickly.

Speaking on The Phil Hay Show podcast, he said: “One who has been mentioned and there has been definitely an interest [from Leeds United] is Michy Batshuayi from Chelsea. 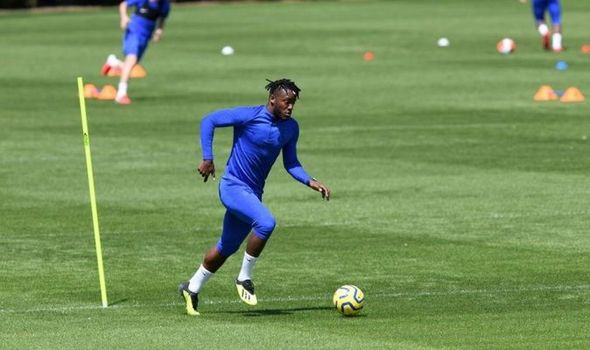 “Bielsa knew him as a youngster at Marseille when he was the manager there so he knows a lot about his game.

“He wouldn’t have to adapt massively to what Bielsa does.”

Batshuayi spent two years at Marseille, scoring 33 goals in 78 appearances across all competitions having broken through at Belgian outfit Standard Liege.

The frontman’s performances were enough to attract the interests of Chelsea, who shelled out £33million for his signature in 2016.

However, Batshuayi has struggled to make a mark at Stamford Bridge and has notched up just 77 outings in four years with the Blues.

A prolific loan spell at Borussia Dortmund in 2018 was a timely reminder of his talent while he also caught the eye at Crystal Palace during the second half of the 2018/19 season.

However, Batshuayi found goals hard to come by during a short stint at Valencia in between those two loans and he has only managed six goals in 24 appearances for Chelsea this term.

The Belgian started the season as second-choice behind Tammy Abraham but slipped behind veteran striker Olivier Giroud in the pecking order.

Now the arrival of Timo Werner from RB Leipzig is expected to hasten Batshuayi’s exit, but Chelsea want to recoup most of their investment on the out-of-favour forward.

This could scupper any deal while wages of £100,000-a-week also pose a potential problem, with Batshuayi likely to have to take a pay cut in order to guarantee regular game time.

Chelsea’s forgotten man is out of contract next year so this summer arguably represents the best chance for the Blues to offload him before he departs from free in 12 months time.

What next for dysfunctional Barcelona after Champions League humiliation?
Ex-Chelsea midfielder John Obi Mikel nears move to Stoke City
Best News
Recent Posts
This website uses cookies to improve your user experience and to provide you with advertisements that are relevant to your interests. By continuing to browse the site you are agreeing to our use of cookies.Ok