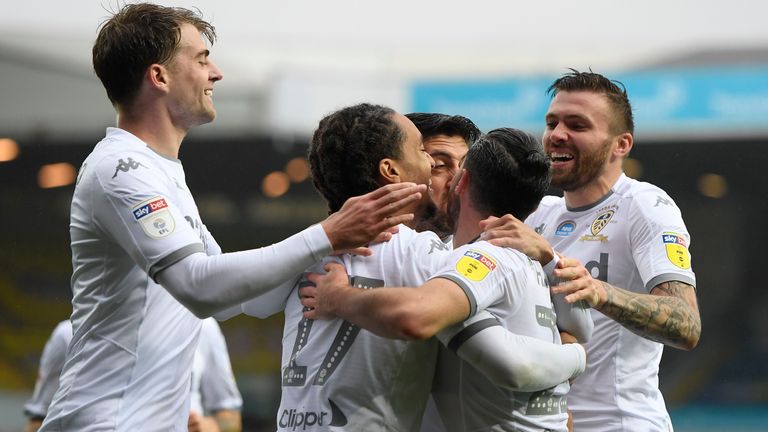 Leeds United have ended their 16-year wait for Premier League football after West Brom were beaten by Huddersfield on Friday night.

Marcelo Bielsa’s side, who edged past Barnsley 1-0 on Thursday, have sealed promotion from the Championship with two games to spare, after the Baggies failed to keep the pressure up at the John Smith’s Stadium.

WE ARE BACK!!! @PremierLeague

Leeds have enjoyed an impressive campaign after bouncing back from last season’s play-off heartache to clinch promotion, returning to the top flight for the first time since 2004. In that time there have been several near misses, while they also spent three years in League One between 2007 and 2010.

Leeds are yet to clinch the Championship title, although a failure for Brentford to win at Stoke on Saturday will do that. If the Bees are victorious, then a point at Derby in Leeds’ game on Sunday – live on Sky Sports Football – will be enough.

‘It means absolutely everything’

“It means absolutely everything. It’s incredible. One of the best feelings I’ve ever had, even though I’m not playing or involved with the club, but it’s absolutely fantastic.

“It feels so good. Bielsa and the team have done an incredible job. Everything they’ve done from start to finish has been done the right way. They way they play, the way they tackle and get after people. They’ve done everything so well and I’m absolutely delighted for everyone associated with Leeds United.

“For all those great people around Leeds, this is for them. It’s absolutely brilliant.” 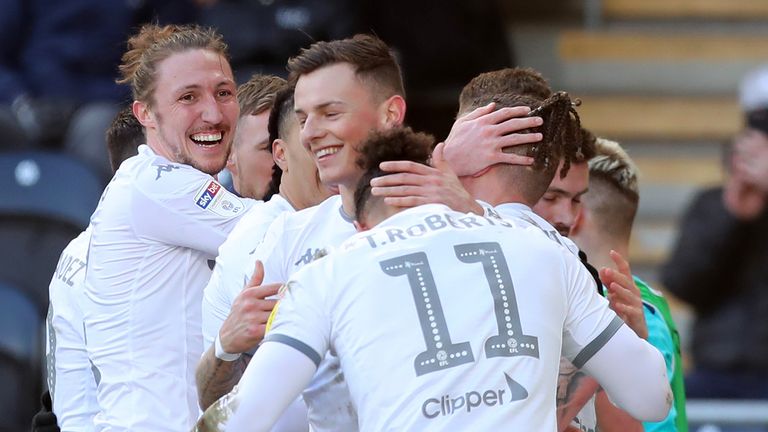 “When Marcelo Bielsa came in, suddenly, we had our identity back. The fans have taken to him, he has believed in the project and he certainly loves the city. The fans are together with him. He has turned some really good players into very good players and now they have got a shot at the Premier League.

“We know it is difficult. There are levels in the Premier League. Clearly, survival is the first thing and then you look to build from there but there is no doubt that the brand that Leeds United have can be reinvigorated around the world. But let’s just enjoy this first!”

“It has been long awaited and very long overdue. When I played that last game in 2004 – 16 years ago almost to the day – you never envisaged that Leeds United would be out of the top flight for so long and even drop into the third tier of English football.

“It is a fantastic achievement from what Marcelo Bielsa inherited two-and-a-half years ago. A team that [then] finished 13th in the Championship to now automatic promotion to the Premier League. A one-club city.” 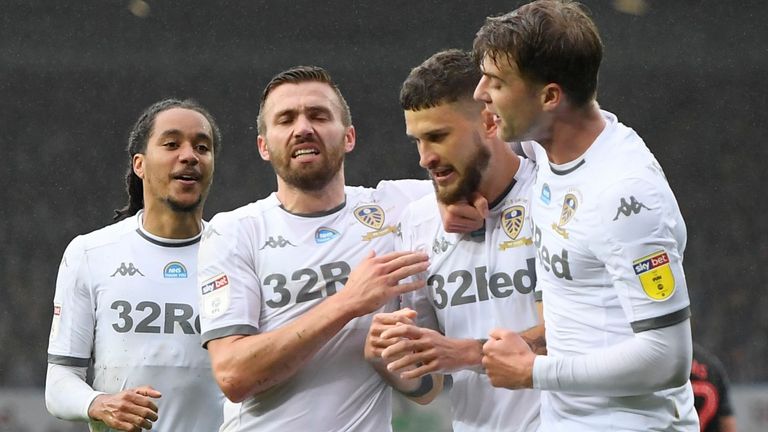 Leeds looked nailed on for promotion in early March. A fifth straight win in a row against Huddersfield saw them move seven points clear of Fulham in third with just nine games to go.

But then the coronavirus crisis put football on hold indefinitely, and the club were left to wonder whether or not there would be a restart.

Eventually, more than three months later, football did return – but Leeds fell to defeat at Cardiff in their first game back. Five wins from six since, however, ensured that they got the job done. Leeds haven’t been out of the top five all season, they have only ended seven gameweeks outside of the top two, and have occupied an automatic-promotion spot since mid-November. 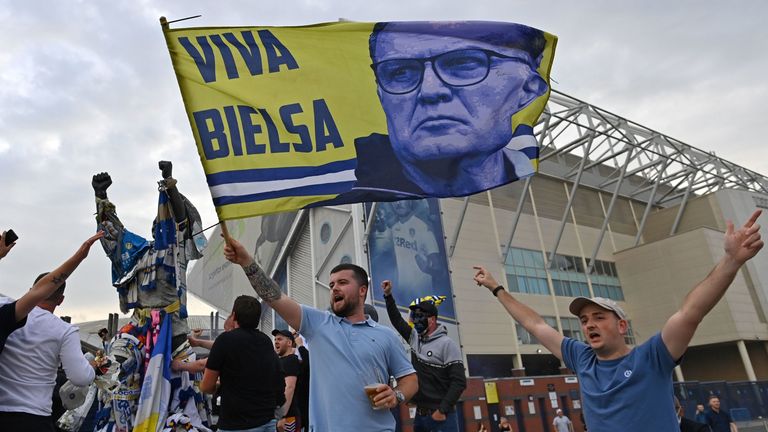 For the majority of last season, it looked as though Bielsa had masterminded a return to the Premier League at the first attempt. At times they looked unstoppable, with seven straight wins from November into December keeping them top of the pile throughout Christmas. 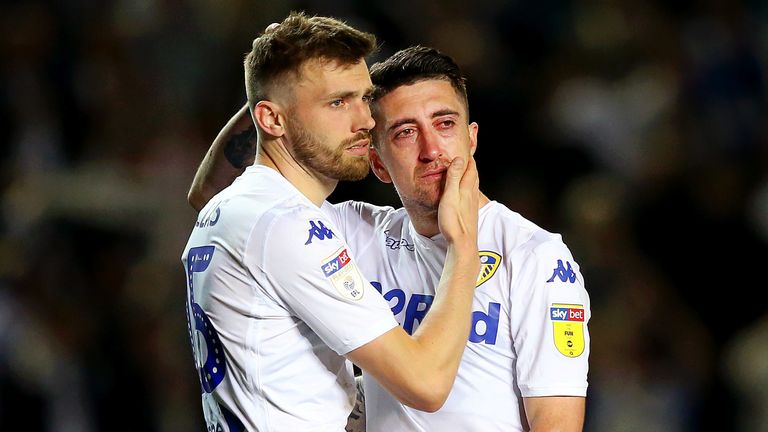 But, to use the old cliche, their campaign truly was a game of two halves. Cracks began to appear with a 2-0 defeat to Hull on December 29 after which they started 2019 with three defeats from five games. Shortly afterwards they were toppled from the summit and though top-two hopes remained intact in the final few weeks, defeats to Wigan and Brentford across the Easter weekend resigned them to the play-offs.

Something of a rivalry with Derby was born in January 2019 when Leeds were accused of spying on the Rams’ training sessions ahead of a meeting between the two. Leeds then went on to beat Frank Lampard’s side 2-0 at Elland Road, but while it was written in the stars that they’d be paired in the play-offs, Derby launched a stunning second-leg comeback to win 4-3 on aggregate.

They’ve learned from the mistakes of last year and certainly learned the hard way, but for Leeds fans this will taste all the sweeter.

How Leeds won promotion to the Premier League 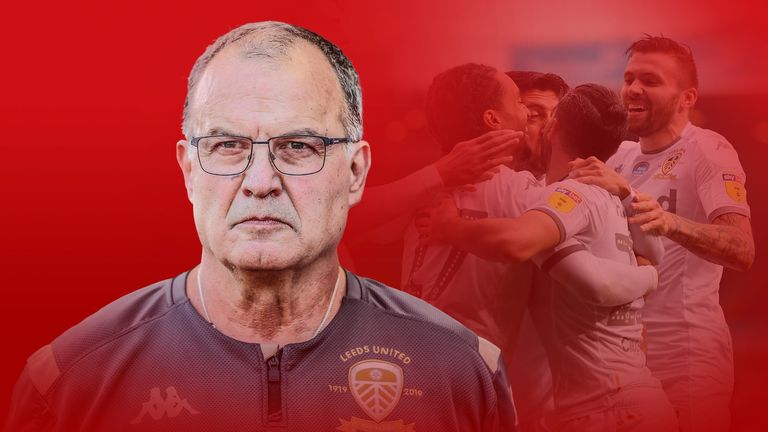 Last season ended in heartbreak for Leeds United. Despite spending most of the season in the top two they failed to make automatic promotion, then crashed out of the play-offs to Derby County despite being favourites to progress.

But Marcelo Bielsa signed on for another year, and they bounced back to go one better in 2019/20. Now, after 16 years of waiting, Leeds are back in the Premier League.

From avoiding a hangover, to some key recruitment and more… this is how they did it.

What promotion means to a Leeds fan Leeds United Football Club. Back to the promised land. They are a Premier League team for the first time in 16 years.

From a personal perspective, it has been some journey, pardon the pun, following Leeds up and down the country. From the depths of Yeovil to numerous trips to The Amex ending in disappointment, heartbreak at Wembley to decimation at the hands of Frank Lampard’s Derby County.

You can rarely say that you have ‘seen it all’, but most Leeds United fans will tell you that is the very truth. It is impossible to sum up the last 16 years under one piece of writing, so here are some of the highlights.

Sit down, grab a drink and have a read

The fall and rise of Leeds United – the journey back 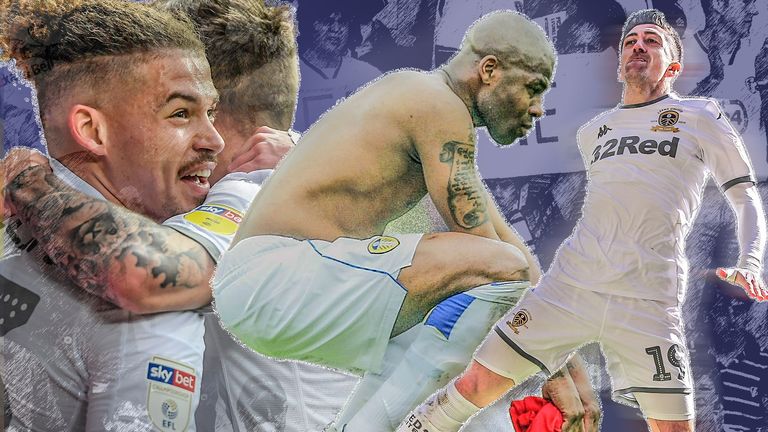 Leeds United promoted to Premier League as second-place West Brom lose at Huddersfield
The Fall and Rise of Leeds United: Their journey back to the Premier League
Best News
Recent Posts
This website uses cookies to improve your user experience and to provide you with advertisements that are relevant to your interests. By continuing to browse the site you are agreeing to our use of cookies.Ok