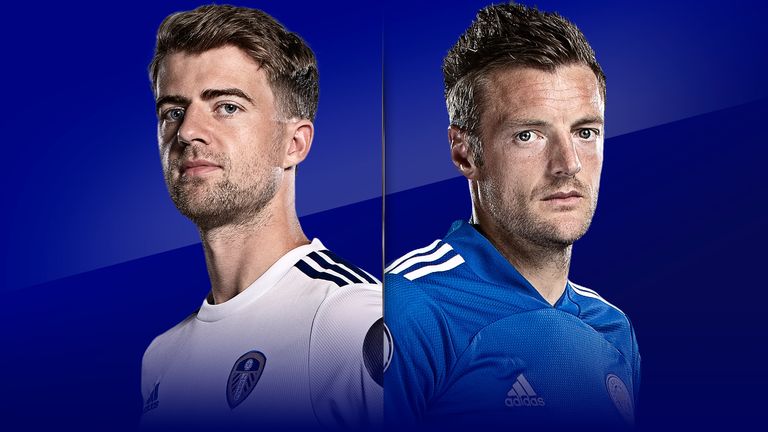 Team news, stats and prediction ahead of Leeds United vs Leicester City in the Premier League on Monday; kick-off 8pm.

Cooper missed last week’s win at Aston Villa due to a groin injury sustained earlier this month while on international duty with Scotland.

Kalvin Phillips is still out after tearing shoulder ligaments against Wolves and is not expected to return until at least the middle of next month.

Centre-back Evans missed Thursday’s 2-1 Europa League win at AEK Athens with a back problem and Castagne is out until after the international break with a hamstring injury.

Caglar Soyuncu, Wilfred Ndidi (both groin) and Daniel Amartey (thigh) are sidelined, with Ricardo Pereira still yet to return to fitness following an Achilles injury.

Leeds vs Leicester will be broadcast live on Sky Sports Premier League from 7pm on Monday Night Football; kick-off at 8pm. Sky Sports customers can watch in-game clips in the live match blog on the Sky Sports website and app. Highlights will also be published on the Sky Sports digital platforms and the Sky Sports Football YouTube channel shortly after the final whistle.

One thing we learnt from the Thursday round of midweek Europa League fixtures is Leicester City are taking their venture into Europe very seriously. Youri Tielemans, James Maddison and Jamie Vardy all started as they came away from Athens with maximum points. A great result, certainly, but such an arduous trip is not exactly ideal preparation for a trip to Leeds, whose intense style is a demanding experience for the opposition.

Leeds top the Premier League for average distance covered this season with 114km per game – some 10km more than the likes of Fulham or Wolves. Any heavy legs in the Leicester camp will be found out at Elland Road. Brendan Rodgers will have a plan to stop them, probably in the same defensive shape that saw them rip through Manchester City. However, Marcelo Bielsa, whose powers have turned Patrick Bamford into Dennis Bergkamp, is taken to keep Leeds rolling at their relentless level for a few weeks more yet.

Pitch to Post Preview: Jamie Redknapp on Man Utd v Arsenal; plus Liverpool’s CB options, and will Everton bounce back?

Jamie Redknapp joins Peter Smith on this week’s show to look ahead to Sunday’s showdown between Man Utd and Arsenal and says there are more questions than answers at Old Trafford as Ole Gunnar Solskjaer prepares for his 100th game in charge.

Sky Sports News reporter Vinny O’Connor has the latest on Liverpool’s injury problems and discusses the young players who could cover at centre-back.

And Sky Sports statistician Matt Cheetham picks out the numbers which explain why Everton’s defeat at Southampton could just be a blip, and makes his bold Pitch for what will happen in the Premier League this weekend.

Listen to the Sky Sports Pitch to Post Podcast on: Spotify | Apple | Castbox

Can Alvaro Morata turn his stuttering career around?

Ole Gunnar Solskjaer's shake-up has revived Manchester United
Coventry City 3-2 Reading: Sky Blues stun Championship leaders
Best News
Recent Posts
This website uses cookies to improve your user experience and to provide you with advertisements that are relevant to your interests. By continuing to browse the site you are agreeing to our use of cookies.Ok