Liverpool legend Phil Thompson believes the signing of Virgil van Dijk has been the catalyst in the Reds ending their 30-year wait for a top-flight title. Van Dijk has been an ever-present in Jurgen Klopp’s Liverpool side who were crowned Premier League champions on Thursday with a record-breaking seven matches remaining in the season.

The Holland international joined Liverpool from Southampton in January 2018 for a world-record transfer fee for a defender of £75million.

Van Dijk helped the Reds reach the Champions League final that same season, where they lost to Real Madrid.

A year later, Van Dijk and Liverpool did get their hands on the trophy after beating Tottenham in Madrid for the club’s sixth European Cup success.

And now Klopp’s side have won their first domestic title in 30 years, which Thompson puts largely down to the impact of Van Dijk.

JUST IN: Dwight Yorke backs Man Utd to complete shock Man City signing to ‘stir it up a bit’ 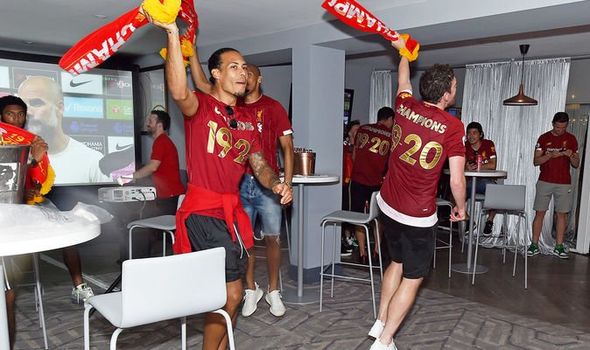 “To me, the signing of Van Dijk was like the Eric Cantona effect that he had at Manchester United – Van Dijk has had that at Liverpool,” Thompson told Sky Sports.

“Yes, Alisson has been an incredible signing but Van Dijk has given them that belief, given the players around him the assurity, the calmness and those [past Liverpool] teams who I said hit the crossbar [in terms of winning the league], those teams didn’t have a good defence to go with some scintillating attack, wonderful midfield players.

“The defence and the goalkeeper a lot of the time let those sides down.

“Not with Van Dijk and not with Alisson, Van Dijk has been incredible.

“He is the best defender in world football.”

Van Dijk says winning the title is a dream come true for the Liverpool squad and something he aimed to do when he first joined the club.

“It’s such a good feeling,” he told the Liverpool website.

“We’ve worked so hard already this season and we are not finished yet. It’s been a dream come true for all of us already.

“For me personally, coming to the club, winning the Champions League, winning the Premier League in the two-and-a-half seasons I’ve been at the club, it is just magnificent personally and a dream come true.

“It’s something I always hoped for when I joined Liverpool. It’s just amazing and it’s amazing to be part of this group.

“It’s amazing also to be with these kinds of players, the manager, the staff, Melwood, all the people there are looking after us.

“Everyone has to feel like a champion who is part of us, including the fans of course.”

Luis Suarez makes huge Jordan Henderson claim after Liverpool title triumph
Hull City defender Angus MacDonald opens up on overcoming bowel cancer
Best News
Recent Posts
This website uses cookies to improve your user experience and to provide you with advertisements that are relevant to your interests. By continuing to browse the site you are agreeing to our use of cookies.Ok