Liverpool have been crowned Premier League champions after Chelsea beat Manchester City 2-1 at Stamford Bridge. The Reds have an unassailable 23-point lead at the top of the table, ensuring Jurgen Klopp’s men win the title with seven games to spare.

City headed into the clash with Chelsea knowing they needed victory to keep their hopes of retaining the Premier League alive, at least mathematically.

But Christian Pulisic scored a brilliant solo strike and Willian hit the winner from the penalty spot, either side of an unstoppable Kevin De Bruyne free-kick.

The 2-1 win for Chelsea meant Liverpool finally ended a 30-year wait for a domestic league title and ensured the Anfield-based club picked up their first ever Premier League silverware.

And the Reds couldn’t contain their excitement with a brilliant video of the squad celebrating being shared online. 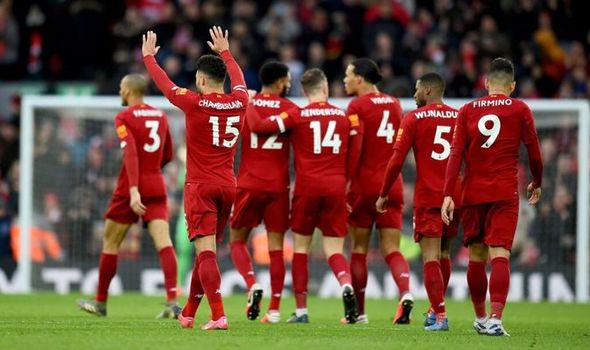 Klopp’s men are seen gathered around a television on an outside patio, with individuals several metres away from each other in accordance with social distancing measures.

Alex Oxlade-Chamberlain, who appears to be filming the clip, and Virgil van Dijk can be seen wildly celebrating as Willian’s penalty goes past Ederson.

And both Roberto Firmino and Alisson are also spotted in the background as Oxlade-Chamberlain flexes his muscles at the camera.

The England midfielder shouts “Come on” into the lens as the Reds jump around deliriously, with victory for Chelsea assured following Fernandinho’s sending off.

The Liverpool squad do not appear bothered about the fact they didn’t get a chance to win the title at the Etihad next Thursday, when they are due to face City.

Speaking to Sky Sports after the title was confirmed, Reds manager Klopp said: “I have no words.

“It is unbelievable, much more than I thought was possible. Becoming champions with this club is absolutely incredible.

“This is for Kenny [Dalglish], for Stevie [Gerrard] – everyone!

“The Manchester City game was really tense, I didn’t want to be involved. It was intense but it is an incredible from my players.

“What they have done over the last few years in exceptional and it’s a pure joy for me to coach them.”

Jay Rodriguez reveals all on his life-threatening sepsis scare

Coady's family were in tears after England call up, now he wants a cap

Liverpool hero Kenny Dalglish reveals Jurgen Klopp wish after winning Premier League title
Steve McManaman pinpoints where Liverpool can get even better after clinching Premier League title
Best News
Recent Posts
This website uses cookies to improve your user experience and to provide you with advertisements that are relevant to your interests. By continuing to browse the site you are agreeing to our use of cookies.Ok