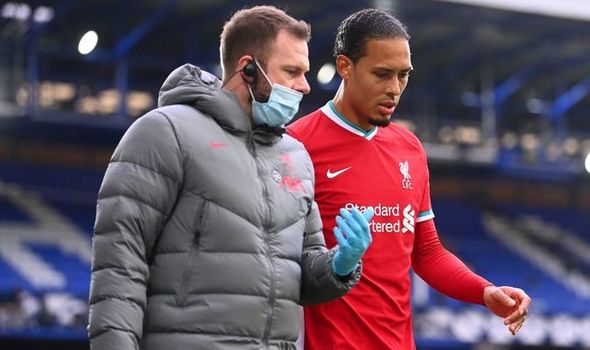 Liverpool have confirmed that Virgil van Dijk has undergone successfully knee surgery as he now prepares to embark on their first stage of his rehabilitation programme. The Dutchman limped off after just 10 minutes of the Merseyside derby with Everton following a full-blooded challenge from Jordan Pickford at Goodison Park.

Scans revealed that Van Dijk had suffered a Grade 3 injury, a complete tear of the ligament meaning the knee joint is unstable.

But now the Premier League champions have confirmed the centre-back is on the road to recovery in a statement and they have also made it clear they will not put a timeframe on his return.

It read: “Virgil van Dijk has undergone surgery on the knee ligament injury he sustained earlier this month.

“The Liverpool defender’s planned operation took place in London and was conducted successfully.

“Van Dijk will now immediately focus on the beginning of his rehabilitation with the support of the Reds’ medical department.

“No timeframe has been placed on the Dutchman’s return to action.”

Ole Gunnar Solskjaer reveals how Manchester United responded to ‘brutal’ Tottenham defeat
Solskjaer hails Man United response to 6-1 Tottenham defeat
Best News
Recent Posts
This website uses cookies to improve your user experience and to provide you with advertisements that are relevant to your interests. By continuing to browse the site you are agreeing to our use of cookies.Ok