Lonely road worth it for Socceroos aspirant Lawrence

Former Melbourne Victory goalkeeper Lawrence Thomas could have signed lucrative contracts with clubs in Turkey, Asia and Saudi Arabia – or even taken a long-term deal at AAMI Park – but instead he's found himself living alone in the southern Danish town of Haderslev.

He signed for Danish Superliga side Sonderjyske, based in Haderslev, which has a population of 22,101 people, a few thousand shy of Traralgon in Victoria's Latrobe Valley. 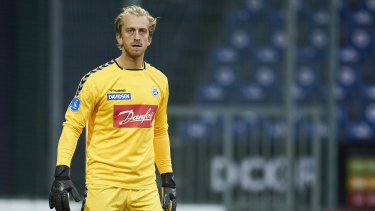 In 1526 Haderslev was the first Danish town to embrace the Reformation, its centre nestled beside a modest lake that's connected to a fjord that runs 15 kilometres into the Baltic Sea.

Thomas moved there in August as one of the dwindling number of A-League players going to smaller European leagues, instead of opting for more money in Asia, India or the Middle East.

He signed as the club's number one goalkeeper and after three clean sheets and regular appearances in the Superliga's team of the week, Sonderjyske sit on top of the table through eight games.

"People don't go sit in cafes because it is getting quite cold. I've gone from Port Melbourne, 100 metres from the beach and obviously there's a lot to do there," he said. 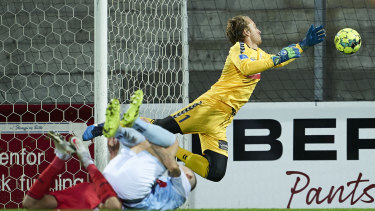 "But in a way it has helped a lot because I just really take my time at training, there's no rush, I am close. Football comes right to the forefront."

Thomas had a brief stint in Europe as a teenager after his time at the AIS. He went on trial to Coventry City in England and then signed for Sheffield United.

He quickly came back because he was struggling to cope alone in the UK following his father's death, and while Ante Milicic tried to get him to sign at Melbourne Heart he decided to choose Melbourne Victory.

"When I was there it was all a bit too much for me, I wanted to be closer to the family," the 28-year-old said. "Coming at my age now I am so comfortable in myself and with football. I have experienced the highs and some bad seasons and patches, as a team and personally.

People think playing in Europe is sitting in a cafe in Paris earning hundreds of thousands a week and driving a Ferrari but it's not like that.

"It can be quite hard, even for myself now, I am not going to lie. At times you get quite low and flat and you're by yourself and you think, 'Jeez is it worth it for the game, to be sitting here on a Friday or Saturday night by yourself in a foreign country, no friends, no family?'

"People think playing in Europe is sitting in a cafe in Paris earning hundreds of thousands a week and driving a Ferrari but it's not like that."

For Thomas, the tougher times are all worth it. It helps too that his club, teammates and coaches have made the transition very smooth.

After waiting five seasons to be Melbourne Victory's number one and winning two grand finals – playing himself into Victory folklore with his 2018 Joe Marston Medal performance – Thomas has his sights set on the Socceroos, World Cups, Asian Cups and European club success.

"It was a bit of a turning point in my career. I have always wanted to come to Europe. I believed I could and I was really eager to make the next step," he said.

"Victory put a very good offer and a longer term deal to stay there, or there was the option to go the more financial option in Turkey or Asia or Saudi Arabia, but for me it was more that I want to look back and not have any regrets.

"The Europe option was based on pushing myself at a higher level and trying to see how far I could go.

"And the Socceroos, I want to be part of that again [he has been in a squad but not capped] … The way we are travelling over here, the team and personally and playing at this level, it can only help my chances."

He loved Melbourne Victory, and the club and their fans loved him, but Thomas says it would have "eaten away at me" to not know if he was up for the European slog.

"When it's all done I can go chill out on Swan Street or Port Melbourne beach. One hundred per cent I will go back and watch them play too," he said.

Republic of Ireland: Four players called up to squad; Seamus Coleman, John Egan return to clubs
Crewe 2-0 Peterborough: Alexandra see off League One leaders
Best News
Recent Posts
This website uses cookies to improve your user experience and to provide you with advertisements that are relevant to your interests. By continuing to browse the site you are agreeing to our use of cookies.Ok