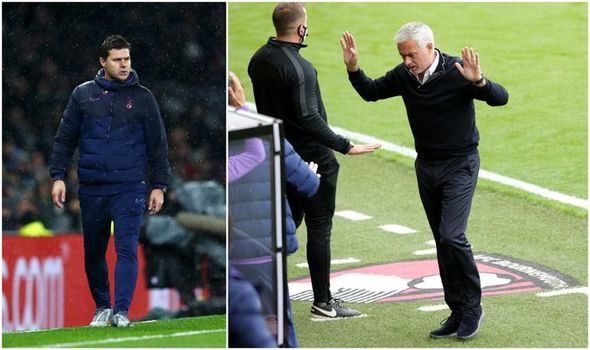 Lord Sugar has called for Mauricio Pochettino to return to Tottenham. The former Spurs chairman issued the plea after Jose Mourinho’s team failed to register a shot on target in a goalless draw against relegation-threatened Bournemouth.

Tottenham needed a win to keep their slim hopes of Champions League qualification alive but they failed to trouble the Cherries, who had failed to keep a clean sheet since December 14.

Spurs made the controversial decision to sack Pochettino in November after a disappointing start to the season, less than six months after guiding the club to the Champions League final.

Mourinho was appointed as his replacement but has struggled to restore the team back to their best.

The dismal draw on the south coast appeared to be the final straw for a number of fans, with Apprentice bigwig Sugar calling for Pochettino’s return.

Tottenham looked to have won a clear penalty when Harry Kane was pushed in the back by Josh King but VAR official Michael Oliver, who ruled out Kane’s goal at Sheffield United last week, said no.

The less-than-impressive performance saw a number of Spurs supporters on Twitter express their frustration with Mourinho.

“Mourinho out. Now,” fumed one fan.

While another added: “Levy out, Mourinho out but it won’t happen.”

The point was enough to help Tottenham climb to ninth in the Premier League table. They host bitter rivals Arsenal in the north London derby on Sunday (4.30pm).

Chelsea's Rudiger 'in contact with Bayer Leverkusen star Havertz'
Academy football left facing huge crisis in wake of coronavirus pandemic
Best News
Recent Posts
This website uses cookies to improve your user experience and to provide you with advertisements that are relevant to your interests. By continuing to browse the site you are agreeing to our use of cookies.Ok