Arsenal ended a run of 29 games without a win at a big-six side as Pierre-Emerick Aubameyang’s second-half penalty gave them a 1-0 victory at Manchester United.

In Ole Gunnar Solskjaer’s 100th game in charge, Manchester United’s much talked about diamond midfield struggled to deal with Arsenal’s energy, and the visitors had the better of the chances as Willian hit the bar and Bukayo Saka headed over unmarked.

Aubameyang curled an effort just wide after the break, but he got another chance from 12 yards after Paul Pogba had fouled Hector Bellerin in the box, and the Gabon striker duly converted (69) to end the Gunners’ hoodoo, which had lasted since 2015.

Arsenal’s deserved win moves them into the top half, but Manchester United, who hit the post via a double Mohamed Elneny and Bernd Leno deflection late on, have just seven points from six games.

Man of the match: Thomas Partey

This fixture has so often showcased first versus second in the Premier League, but with both sides starting the game in the bottom half, the aim was more to kick-start indifferent starts to the season.

Arsenal’s press was led by summer signing Thomas Partey, “the best player on the pitch” according to Sky Sports’ Jamie Redknapp, but it failed to yield a goal in the opening hour. 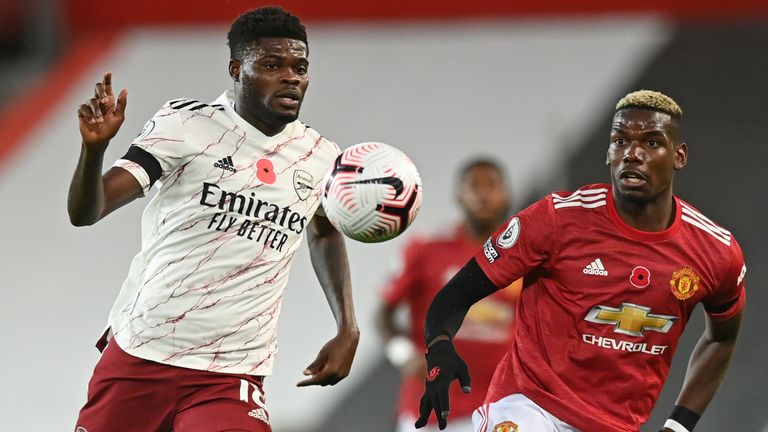 Willian hit the bar from the edge of the box following a nice one-two with Aubameyang, but the best chance fell to Saka, who headed over unmarked from Bellerin’s cross after Victor Lindelof and Aaron Wan-Bissaka simply failed to challenge.

United were flat, and mustered up just one shot in the first half, their fewest in a Premier League home game since October 2015, and had just three touches in the Arsenal box, their fewest since December 2017.

Arsenal were edging what was at times a low-quality game of chess, and after Aubameyang curled just wide from an Arsenal break, the striker had a clearer sight of goal from the penalty spot after Pogba’s clumsy clip on Bellerin just inside the box. 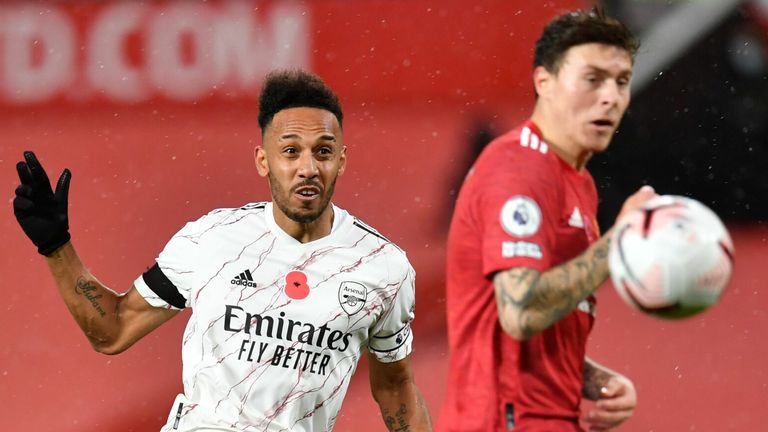 Bellerin got goal-side of Pogba to draw the foul, one of referee Mike Dean’s easier decisions, and Aubameyang made no mistake, sending David de Gea the wrong way.

United’s inevitable spell of pressure came, but sub Donny van de Beek’s double-deflected cross, off Elneny, then Leno, then the near post, was the closest they came in the entire game. 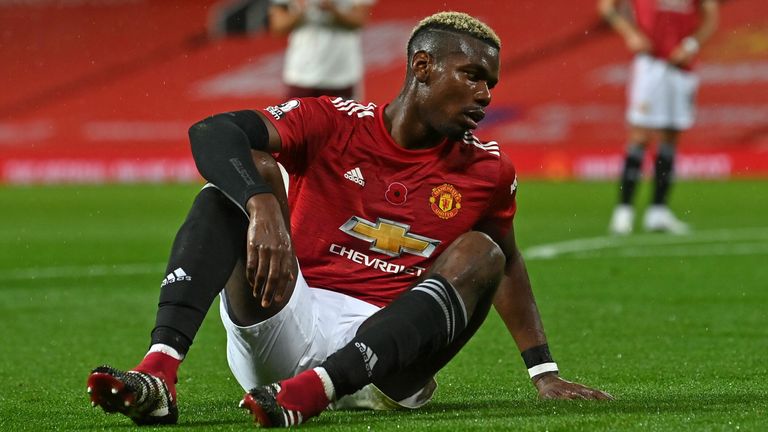 Arsenal’s win was thoroughly deserved as Mikel Arteta “set them up perfectly”, according to Sky Sports’ Gary Neville, an apt example of the Gunners’ more conservative and considered approach under the Spaniard as they hold the best defensive record in the top flight.

Rob Holding’s inclusion was a surprise given his muscle injury suffered in the warm-up at Man City a fortnight ago, but he came in alongside Mohamed Elneny and Thomas Partey. Dani Ceballos and Granit Xhaka dropped to the bench, with David Luiz out injured.

But for Solskjaer on his century of games, questions remain over consistency and how best to use United’s midfield personnel after another sub-par showing from Pogba.

Keane: Long way back for United 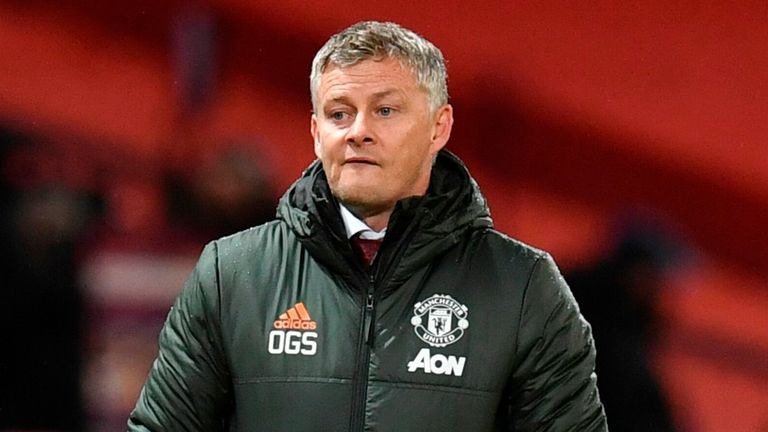 “Where do you want me to start? A lack of energy, of enthusiasm, and a real lack of quality. That really concerned me. No quality, no composure.

“Some of the performances were really poor. Have they turned a corner? It’s the longest corner ever. I am just not convinced by these players.

“I looked at Rashford closely today. His body language was shocking. Shrugging his shoulders when things didn’t go his way? You roll your sleeves up when you play for Manchester United. I don’t see any leaders out there. I am really, really worried about Manchester United now.

“A real lack of quality. There’s a long way back for this club. I don’t see men out there. I don’t see guys who you want to be in the trenches with, guys you would trust.”

Manchester United now go to Istanbul Buyuksehir in the Champions League at 5.55pm on Wednesday, before going to Everton at 12.30pm in the Premier League on Saturday.

Arsenal host Molde in the Europa League on Thursday at 8pm, and then welcome Aston Villa to the Emirates at 7.15pm on Sunday, live on Sky Sports Box Office.

Arsenal player ratings vs Man Utd: Gabriel and Partey shine in Old Trafford win
Arsenal victory shows they are making progress under Mikel Arteta
Best News
Recent Posts
This website uses cookies to improve your user experience and to provide you with advertisements that are relevant to your interests. By continuing to browse the site you are agreeing to our use of cookies.Ok