Ole Gunnar Solskjaer believes Manchester United are back on the right path as he prepares to take the wheel for the 100th time when Arsenal head to Old Trafford on Super Sunday.

Parachuted into the Old Trafford hotseat initially as a temporary replacement for Jose Mourinho in December 2018, the Norwegian has been on a rollercoaster ride as he attempts to get the club back to the top.

October has been a microcosm of such highs and lows, with the month starting with a chastening 6-1 home loss to Tottenham and ending in a jaw-dropping 5-0 Champions League win against RB Leipzig.

United kick November off with a home clash against Mikel Arteta’s Gunners – live on Sky Sports Premier League – when Solskjaer – to his shock – will reach a century of matches in charge.

“Arsenal is always going to be difficult because they are a very good team with a good manager, who’s got some great ideas on how football should be played and I’m looking forward to it,” he said.

“I am surprised it’s 100. It’s gone really quickly, even though a lot has happened. So, let’s hope I can celebrate number 100 with a good performance and a result. I’ve enjoyed it so far.”

Ahead of his 100th game in charge of Man Utd, Jamie Redknapp insists there is still plenty more room for improvement for Solskjaer.

“It was obviously an incredible start,” said Redknapp. “When he first arrived, we felt it was almost the second coming, a new Alex Ferguson!

“Everyone was so excited by the regime, we all thought that he’d got this group of players together and made everything better after what Jose (Mourinho) had done. But that was pretty short-lived.

“There’s a lot more questions than answers now. He’s done OK, I’d say, nothing more, nothing less. The position United are in is nowhere near where they should be.

“They’ve thrown a lot of money at the problem but haven’t always bought the right players… so I think if you’re to analyse where Solskjaer and Man Utd are right now, they should never be in the bottom half of the table.” With their 1-0 loss to Manchester City earlier this month, Arsenal extended their winless run in away games against the Premier League’s big-six sides to 27 outings. It’s a barren streak which stretches back almost six years, to a 2-0 win over Manchester City in January 2015.

Only one player remains from Arsenal’s starting line-up that day at the Etihad Stadium in Hector Bellerin, but the current crop’s recent away games against their big-six rivals have offered little encouragement that the run is about to end.

Before the 1-0 loss at Manchester City on October 17, there was a 3-1 reverse to Liverpool at Anfield at the end of September. Arsenal were outshot by 31 efforts to 15 in those games and averaged just 35 per cent possession.

Of their five big-six opponents, Arsenal have in fact fared best against Manchester United in recent years, having at least avoided defeat in four of their last six visits to Old Trafford. But Ole Gunnar Solskjaer’s side will still hope to take advantage of Arsenal’s long-standing psychological shortcomings in the big away games.

United have not fared well in home games against those sides this season, of course, losing 6-1 to Tottenham and playing out a goalless draw with Chelsea, but last season they were more successful. On Sunday, they will hope for a performance like the one they produced to beat Manchester City 2-0 at Old Trafford in March.

Will Arsenal start the Partey? 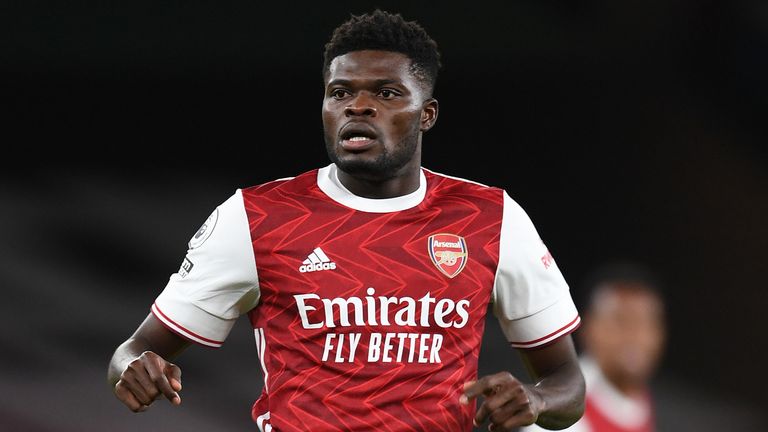 There were moments during Arsenal’s 1-0 loss to Leicester at the Emirates Stadium last weekend when Thomas Partey could not hide his frustration, throwing his arms up, exasperated, when the red-shirted centre-backs behind him ignored his calls for the ball in favour of another sideways pass.

By the end of the game, and despite playing the full 90 minutes, Partey had only had 60 touches compared to 113 and 81 for fellow midfielders Granit Xhaka and Dani Ceballos. Arsenal’s build-up play bypassed him and it did Arsenal few favours. The result was a sterile performance which lacked penetration.

Placing greater trust in Partey might help change that at Old Trafford on Sunday. The Ghanaian is known for his defensive qualities, the intelligent positional play and efficient tackling ability he demonstrates in the heart of midfield. But he is also an accomplished passer, a player adept at threading balls through the lines and helping to move his team forward.

Perhaps his team-mates are still getting used to his presence there, favouring more established passing options while they do. But what’s certain is that Arsenal need to start doing things a little differently if they are to rediscover the attacking impetus they appear to have lost.

Putting the emphasis on Partey might be a good place to start.

Arsenal are not the only ones with issues in midfield, of course. United We Stand editor Andy Mitten joined Super Sunday Matchday on Sky Sports News to discuss the form of Paul Pogba and how an empty Old Trafford is affecting Manchester United’s home form.

“I don’t think Paul was playing well and he lost his place in the team,” said Mitten. “I think it’s that simple and I don’t think it’s anything personal. When he’s come on as a substitute he’s done well. I thought he did well in Paris and the other night against Chelsea.

“He was expected to be the star. I bought L’Equipe and he was on the front page and everybody thought Pogba’s one of the main men of Manchester United. The problem is, while he’s undoubtedly talented, he’s been too inconsistent.

“I’d still love him to be a big success at Manchester United. The fans are a little bit divided on him. Do they like it when he says he dreams of playing for Real Madrid? Not really, and there’s a feeling he just needs to be much more consistent.

“This is the type of competition Ole Gunnar Solskjaer wanted in his squad, all over the squad and there’s still some way to go.”

“We are seeing inconsistent results,” added Mitten. “United are winning away all the time but their home from is poor. Look at the league table, it’s still very early but it’s not attractive for United fans at the moment.

“But that win in Paris last week was outstanding. The win at Newcastle was very good. There are just more concerns about what is happening at Old Trafford.

“I feel that if there was a full crowd against Chelsea that result would have been different. I know both defences were excellent, but that Old Trafford crowd would not have accepted the pace that the game was played at.

“They would have been urging the team forward. Those roars that you get in big British football grounds that the players love. It’s not the orchestrated ultra-led chants you find on the continent. But when you see your team attack, any team in England, the players respond to that and there was none of that. Man Utd vs Arsenal will be broadcast live on Sky Sports Premier League from 4pm on Super Sunday; kick-off at 4.30pm. Sky Sports customers can watch in-game clips in the live match blog on the Sky Sports website and app. Highlights will also be published on the Sky Sports digital platforms and the Sky Sports Football YouTube channel shortly after the final whistle.

The deadline-day signing made his debut in the Champions League win at Paris Saint-Germain but did not make the squad against Chelsea or RB Leipzig after contracting coronavirus. Arsenal will welcome back a host of regular names who were rested for the Europa League win over Dundalk on Thursday.

The likes of Pierre-Emerick Aubameyang, Bernd Leno, Thomas Partey and Alexandre Lacazette are in line for recalls, while Willian is fit following an ankle injury.

Mikel Arteta is without a number of defenders with David Luiz (thigh), Rob Holding (hamstring), Pablo Mari (ankle) and Calum Chambers (knee) all missing through injury, although William Saliba is available to make his debut if called upon.

‘Edinson Cavani didn’t actually warm up, did he?’ Roy Keane hits out at forward after Manchester United defeat

Sportsmail's experts look ahead to the new Premier League season

Nat Phillips was ‘looking forward’ to leaving Liverpool before starring on debut
Arsenal boss Mikel Arteta’s prediction is bad news for Aston Villa and Everton
Best News
Recent Posts
This website uses cookies to improve your user experience and to provide you with advertisements that are relevant to your interests. By continuing to browse the site you are agreeing to our use of cookies.Ok