Manchester United may allow Jude Bellingham to join Borussia Dortmund if the Bundesliga club reduce their asking price for Jadon Sancho, according to Sky Sports reporter Rob Dorsett. Sancho is United’s top transfer target heading into the upcoming window. However, reports claim the Red Devils are not willing to pay more than £50million for the England international.

Dortmund want over £100m for Sancho but, like many clubs, are set to face financial struggles due to the coronavirus pandemic.

Birmingham City sensation Bellingham, who turned 17 on Monday, is a target for both Dortmund and United.

“Dortmund want to sign Birmingham teenager Jude Bellingham, could this be key then to the Sancho deal?,” Gomersall said.

Dorsett said it is a possible scenario which could see Sancho join United for a cheaper price. 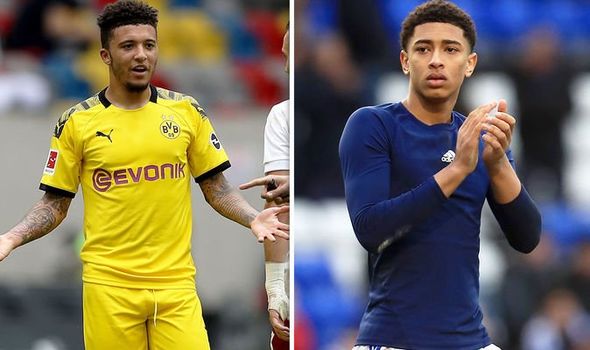 “It could be, it could be, because Jude Bellingham, like Jadon Sancho, is right in the middle of a power struggle between these two huge clubs,” Dorsett replied.

“Now, the dynamic is slightly different because Jude Bellingham is owned by Birmingham City right now, so neither Dortmund or Manchester United have the upper hand.

“Could he be a makeweight in that negotiation for Jadon Sancho? It’s absolutely fascinating.

“And the future of Jadon Sancho and Jude Bellingham, absolutely fascinating for the next few months or so.”

Meanwhile, former United coach Rene Meulensteen says Ole Gunnar Solskjaer should prioritise signing a striker rather than a winger such as Sancho.

“The first thing that you talked about is they may have to go out and spend for a big striker,” Meulensteen told talkSPORT.

“But if you look to the other players that have been there, [Marcus] Rashford, Martial, they’re not really out-and-out strikers.

“Greenwood, young player coming up, same thing there. So there are a lot of chances and goals that can be created coming from the wide areas, Sancho is exactly the same player.

“What I think Manchester United is missing is a striker of the calibre of [Robert] Lewandowski, somebody who is up there, can hold the line, can link play but when it comes to finishing chances in and outside the box, that sort of player and they are hard to come by.”