Manchester United suffered a double injury blow in the 2-2 draw with Southampton in the Premier League with Luke Shaw and Brandon Williams both forced off at Old Trafford. The Red Devils conceded a late equaliser which leaves them fifth in the table.

Shaw was forced off in the 75th minute as he rolled his right ankle and was seen limping off the pitch and back to the dressing room.

Williams was involved in a head clash with Kyle Walker-Peters which left blood pouring from his head.

The youngster could take no further part and is unlikely to return fast this week.

It means United may have no recognised left-back fit for the Premier League match with Crystal Palace on Thursday or the FA Cup semi-final with Chelsea on Sunday.

JUST IN: Arsenal star slams team-mates for not following Arteta plan against Spurs 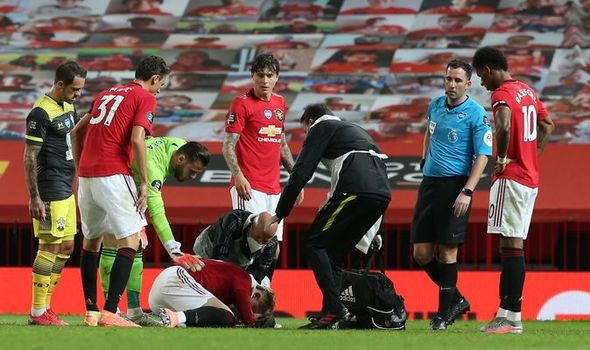 Chris Sutton was glad to see how quick the medical staff were in acting to help Williams and Walker-Peters.

He said: “That was a nasty, nasty collision. Good to see the medical teams of both sides on the pitch immediately. You cannot take chances with head knocks.”

United have avoided injury problems since the Premier League restart but Ole Gunnar Solskjaer now has something to think about.

Southampton equalised late in injury time to leave the Red Devils fifth in the table and outside the Champions League qualifying places.

Premier League table: Latest standings as Man Utd play Southampton
Man Utd boss Solskjaer defiant on top four race as Chelsea and Leicester get big let off
Best News
Recent Posts
This website uses cookies to improve your user experience and to provide you with advertisements that are relevant to your interests. By continuing to browse the site you are agreeing to our use of cookies.Ok